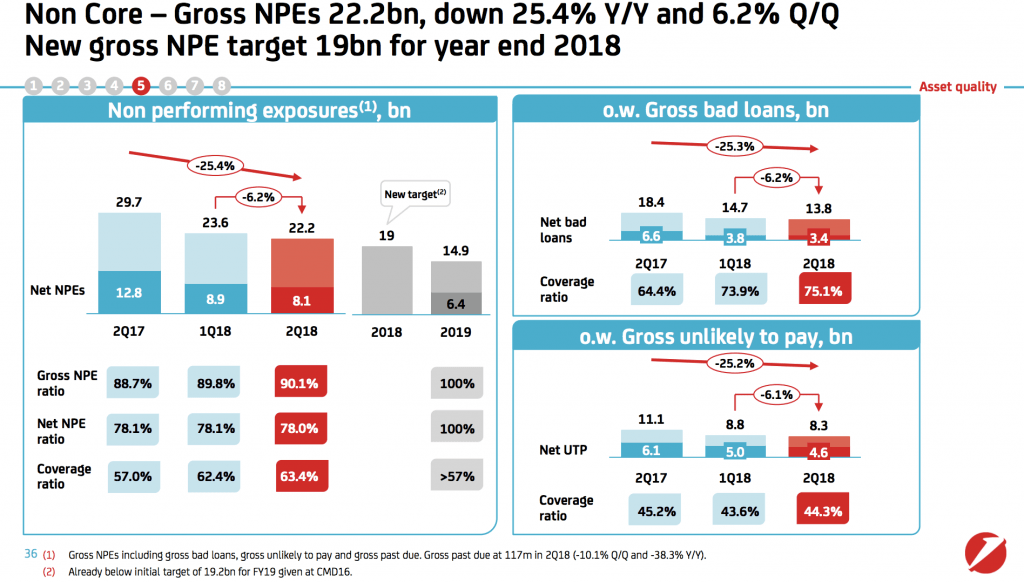 The participants to the NPL and private debt markets are fully operative again.

Unicredit will sell Progetto Milano and Progetto Torino, respectively a secured and unsecured portfolio of NPLs worth 1 billion each (see here a previous post by BeBeez). The bank reportedly announced that by the end of 2018 aims to hold on its account non-core NPLs worth 19 billion from the amount of 22.2 billion at the end of last June. Unicredit is also selling Sandokan 2, a portfolio of secured UTPs worth between 2 and 3 billion. Unicredit is not going to auction this portfolio, but it may invite Pimco, Gwm, and FinanceRoma (the bidders for Sandokan 1) to express interest.

Banca Agricola Popolare di Ragusa sold a portfolio of gross problematic credits worth 348.6 million of euros (see here a previous post by BeBeez). The bank issued three tranches of asset-backed shares that were 28% of the total value of the portfolio: a senior tranche worth 85 million that will pay a coupon of 60 basis points (bps) over the six months Euribor with BBB (low)/Baa3 rating (DBRS Ratings and Moody’s). The mezzanine tranche of 9 million has a coupon of 800 bps over the six months Euribor and DBRS rating CCC. The junior tranche junior of 3.5 million is unrated. Scope Ratings will rate with BBB the senior tranche and B the junior.

Eco Eridania, an Italian waste management company, received financing from Banco Bpm (agent), Natixis, and UBI Banca (see here a previous post by BeBeez). The company belongs to financial firm Icon Infrastructure Partners and will invest these resources in refinancing existing liabilities, in the core business, and in its working capital. Eco Eridania’s ceo Andrea Giustini holds a minority of the business together with his family.

Equita Private Debt Fund, headed by Paolo Pendenza and managed by Equita sim and Lemanik Asset Management, subscribed subordinated bonds worth 10 million euros that L Catterton and Ambienta issued through the SPV that set up for acquiring  Pibiplast, an Italian packaging company (see here a previous post byBeBeez). Pibiplast has sales of 58 million. In 2016 the company generated revenues of 57.13 million and an ebitda of 7.65 million.

Cbus, the Amundi’s fund for the food industry, subscribed bonds worth 71 million of euros that Italian agri-food companies launched (see here a previous post by BeBeez). The issuers will invest the proceeds of this transaction for improving their working capital. Milan-based boutique Pirola Corporate Finance supports Cbus for its origination activity, while Ashurst provides legal counsel.

Velenosi, an Italian producer of high-end wines, issued a 3 million euros worth minibond that will mature in December 2023 (see here a previous post by BeBeez). The reimbursement of this 5.65%-coupon liability will start in June 2019 and have an amortizing structure. Anthilia Capital Partners subscribed the bond that has the support of FEI’sInnovFin SME Guarantee Facility del Fei. Velenosi belongs to the eponymous family and generates abroad over 60% of its sales of 8 million with an ebitda of 0.55 million and a net financial debt of 4.5 million.

ETT, an Italian IT and New Media company, listed on ExtraMot Pro a minibond of 1 million of euros due to mature in September 2025 and with a 6.5% coupon (see here a previous post by BeBeez). Frigiolini&Partners (F&P) Merchant acted as advisor to the company. In October 2018, ETT announced its intention to raise resource throughFundera the equity crowdfunding platform that belongs to F&P. ETT aims to raise up to 2 million through a capital increase for a 20% post-money stake. Giovanni Verreschi is the ceo of ETT that has sales of 11.56 million an ebitda of 1.1 million and net financial debts of 10.87 million.