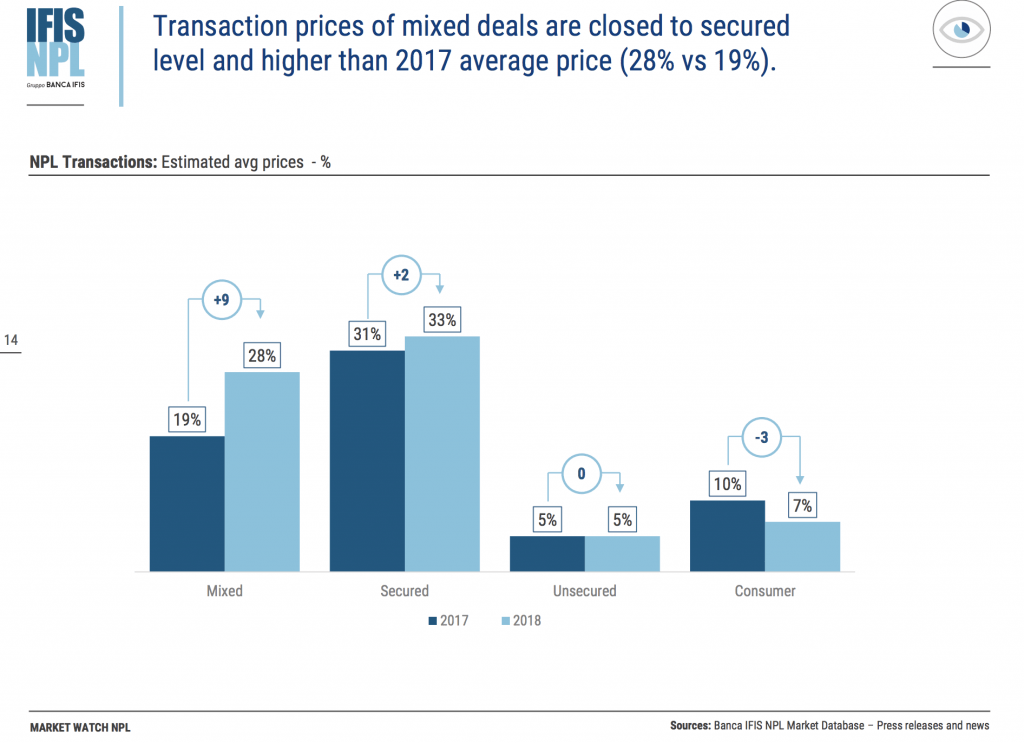 The net price of Italian portfolios of NPLs bought and sold in Italy this year will be higher than 18% of their gross value, said Banca Ifis in its report Npl Market Watch (see here a previous post by BeBeez). The price of mixed portfolios is seen up from 19% to 28% this year while the price for secured portfolios is seen to raise from 31% to 33%. Unsecured portfolios’ price will be instead  5% like in 2017, while the unsecured consumer portfolios’ average price is seen down to 7% from 10% last year. Ifis NPL also highlights that at the end of July there were still 127 billion euros gross of NPLs on the books of Italian banks, but between 2015 and July 2018 the same Italian banks had sold 130 billions euros. In the meantime, the managers of the transferred portfolios have recovered 5 billion euros from the debtors, which means that there are still 252 billion euros of NPls to be recovered on the market. On another front, Banca Ifis said that it will provide easier access to factoring services to the clients of SGA, of which Marina Natale is the ceo (see here a previous post by BeBeez).

N3A, or Nea, is the name of the artificial intelligence tool that Matteo Coppola and the IT team of Italian firm Credito Fondiario created for analysing vast amounts of data about non perfomring exposures (see here a previous post by BeBeez). Iacopo De Francisco, managing director of Credito Fondiario (of which Tages Capital owns 60% and Elliott 40%) said that the company is now a credit manager 4.0 as fintech allows it to evaluate about 1k loans in less than 5 minutes.

AnaCap acquired two portfolios of Italian NPLs worth 225 million of euros and hired Phoenix Asset Management as special servicer (see here a previous post by BeBeez). Volksbank sold NPLs worth 141 million, of which 131 million have the back of real estate assets. Banca di Pisa e Fornacette sold a portfolio of NPLs worth 84 million.

Conte Tasca d’Almerita, a Sicilian wine producer, placed a minibond of 3 million of euros for internationally developing its business (see here a previous post by BeBeez). The company issued an ExtraMotPro-listed senior secured minibond due to mature in September 2025 paying a 3.90% coupon and with an amortising repayment structure starting from the third year. The family Mastrogiovanni Tasca has been running the business for eight generations. Conte Tasca has sales of 22.4 million, an ebitda of 3.1 million, and net financial debt of 21.1 million.

Listed Italian financial firm Illimity acquired a portfolio of NPLs worth 263 million of euros on the secondary market (see here a previous post by BeBeez). Illimity currently has in its portfolio NPLs for 418 million euros.