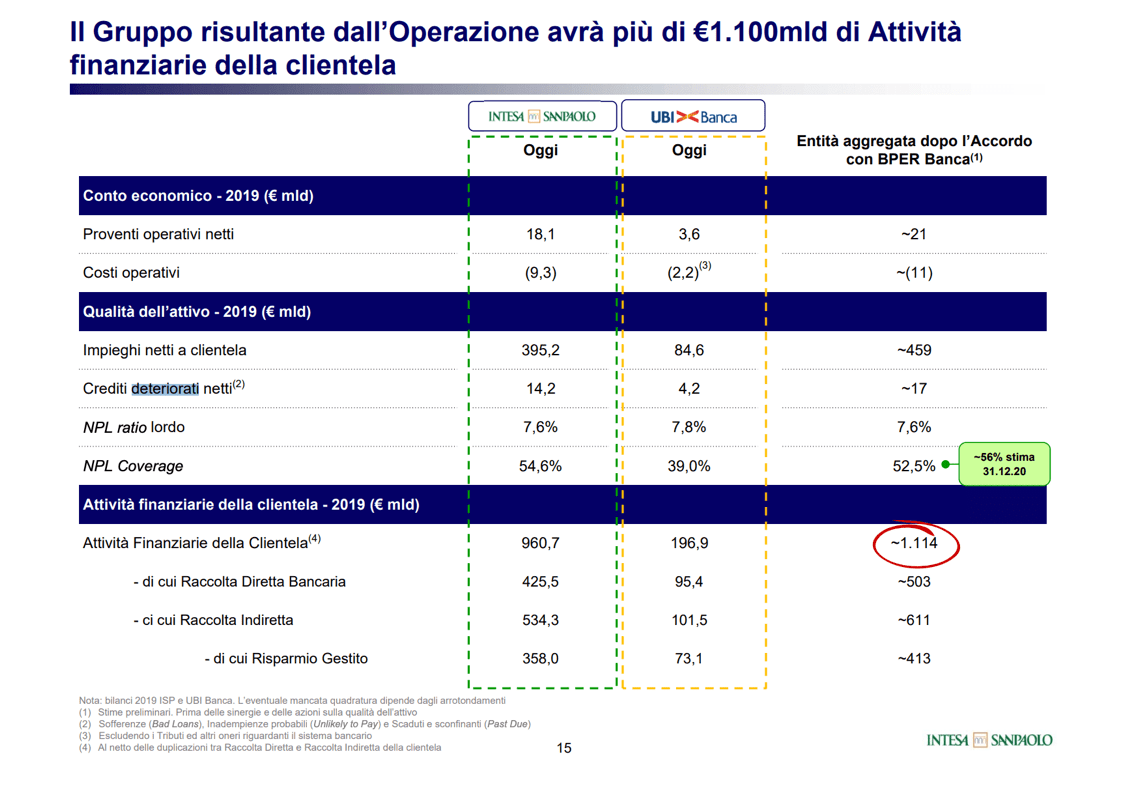 The takeover bid announced unexpectedly by Intesa Sanpaolo on UBI Banca on the night between Monday and Tuesday (see the press release here and the presentation to analysts here) will lead to a series of important synergies according to the institute led by Carlo Messina and “will further improve credit quality without extraordinary charges for shareholders, making use of the negative goodwill of around 2 billion euros generated by the transaction to cover integration costs and loan adjustments in 2020 with which to accelerate the reduction in impaired loans “.
In particular, the banking group explained in its note,  that downstream of the transaction  “an incidence of impaired loans on total loans, gross of value adjustments, is expected to be reduced to a level of less than 5%, equal to a level less than 4% based on the EBA definition, in 2021, better than the objective of the 2018-2021 Business Plan of Intesa Sanpaolo (a level below 6%, equal to a level below 5% based on the EBA definition) ” . 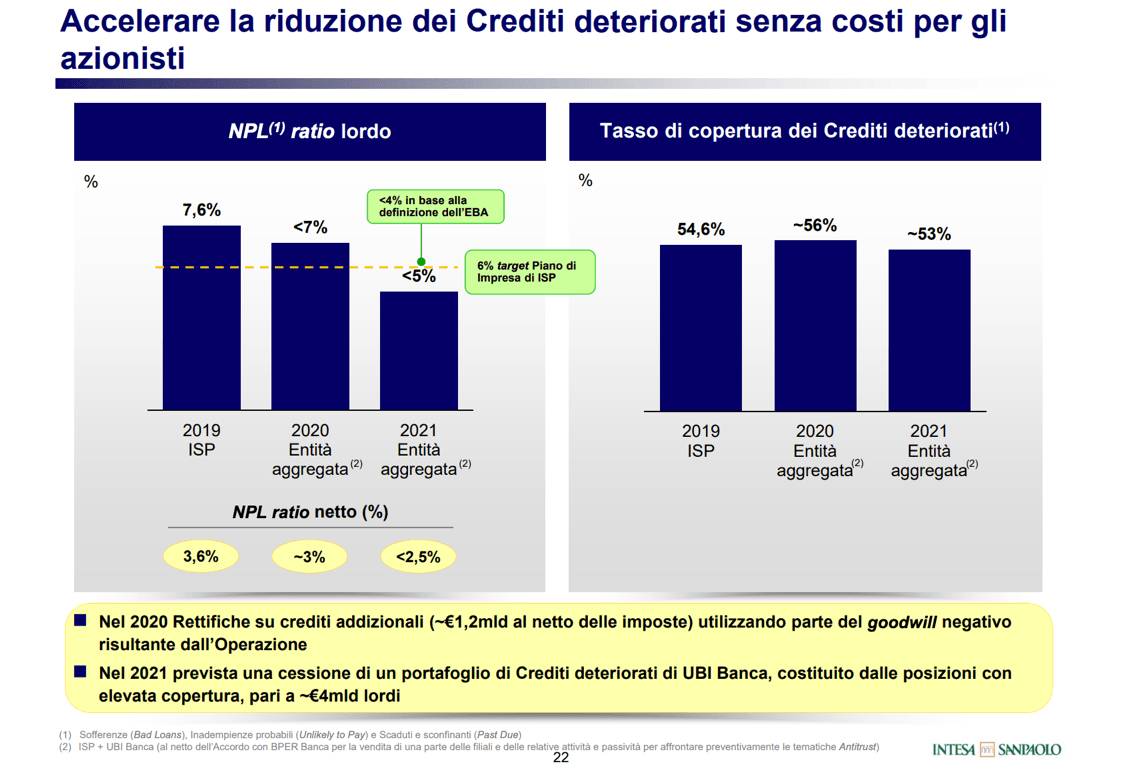 The aggregate entity, in fact, to date would have a gross NPE of 7.6%, but already at the end of 2020 a gross NPE of less than 7% is expected, thanks to additional credit adjustments for around 1.2 billion euros, using part of the negative goodwill resulting from the transaction, while in 2021 the gross NPE of the aggregate entity is expected to fall below 5% thanks to a sale of a portfolio of impaired loans of UBI Banca, set up from positions with high coverage, worth 4 billion euros GBV.
At the end of 2019, Intesa Sanpaolo’s gross NPEs decreased to 31.3 billion euros (14.2 billion net) from 36.5 billions at the end of 2018 (16.6 billions net, see here the press release on FY 2019 results), with gross NPEs which therefore fell to 7.6% (3.6% net) from 8.8% at the end of December 2018 (4.2% net).
In particular, during 2019 the stock of gross NPEs decreased by 6 billion euros in 2019 and in total by around 34 billions from September 2015 (by around 20 billiosn excluding on the one hand the sale of bas loans to Intrum completed in the fourth quarter of 2018 and that of loans classified as UTPs  to Prelios completed in the fourth quarter of 2019; and, on the other hand, the incremental impact of the new definition of default) and approximately 21 billions since December 2017 (of approximately 8 billions excluding the Intrum and Prelios operations and the new definition of default) already realizing in the first two years of the 2018-2021 Business Plan 83% of the reduction target envisaged for the entire four-year period (see the presentation of the 2019 results here) . 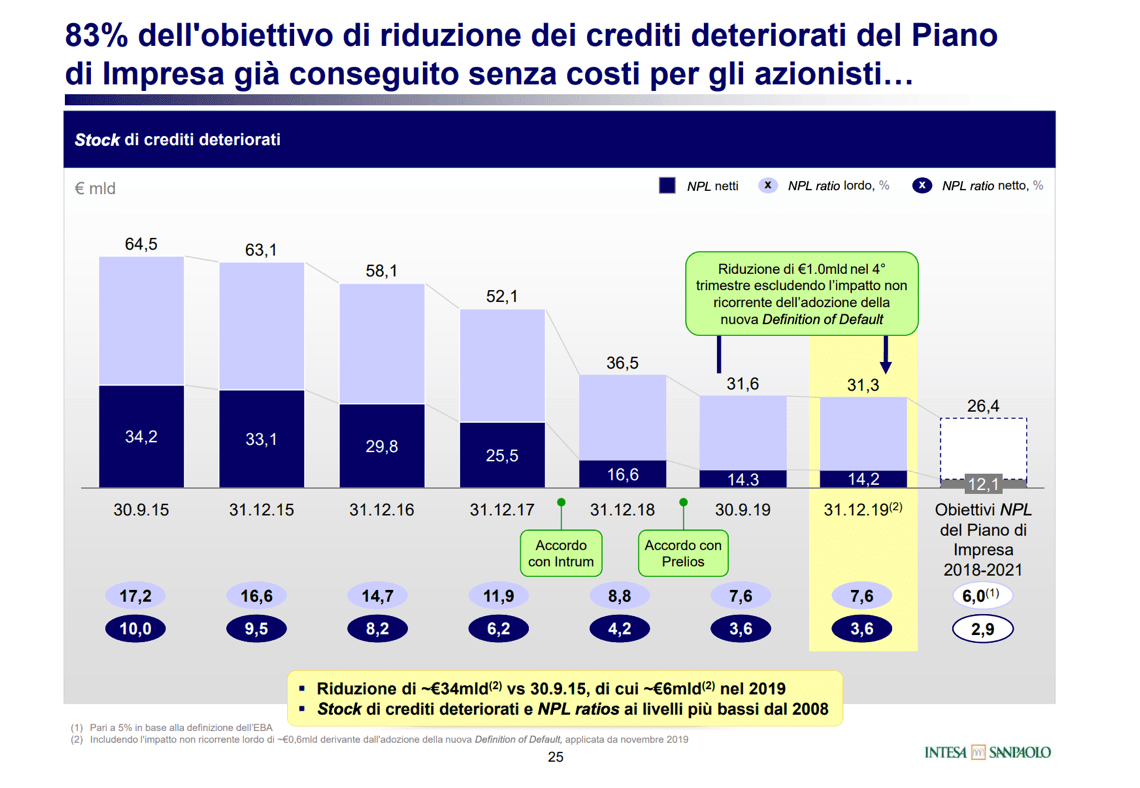 Intesa Sanpaolo and Prelios signed the closing of the UTPs agreement announced at the end of July last December (see here a previous article by BeBeez). The agreement, as known, concerns the management and sale of a portfolio of UTPs in the corporate and SMEs segment of 9.7 billions GBV and is aimed at maximizing the return on performing and the transfer and securitization of the portfolio. In detail, the agreement between Prelios and Intesa Sanpaolo provides: a ten-year contract for the servicing of UTPs of the corporate and SME segment of the Intesa Sanpaolo Group by Prelios, with an initial portfolio of approximately 6.7 billions, at gross of value adjustments; and the sale and securitization of a portfolio of UTP loans of the Intesa Sanpaolo Group corporate and SMEs segment equal to approximately  3 billions GBV at a price of approximately  2 billions, in line with the load value.
The agreement with Prelios was added to the strategic partnership concerning the management of bad loans between Banca Intesa Sanpaolo and Intrum, entered into Screen 2020-02-19 at 07.54.36 in April 2018. The partnership provided for the purchase of 51% of the Intrum’s non-performing loan management platform for the banking group and the simultaneous purchase of a bad loan gross portfolio of 10.8 billion euros, to be securitized. All for a total value of 3.6 billion, of which 500 million for the share of the platform (see here a previous article by BeBeez). 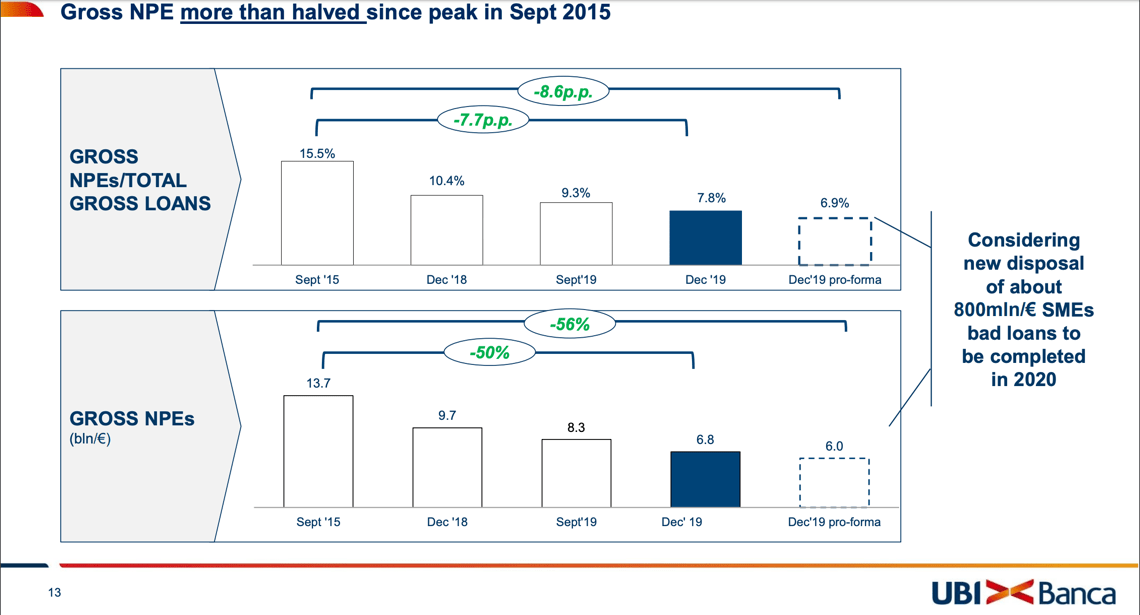 As for UBI Banca, at the end of 2019 it had gross NPEs for 6.8 billionss, down from 9.7 billions at the end of 2018. The bank is currently studying a sale of a corporate bad loans portfolio consisting of loans granted to small and medium businesses with a gross value of 800 million euros, which will be closed by the end of this year (see here a previous article by BeBeez). The bank announced this on Monday 10 February, on the occasion of the presentation of the 2019 results.When the operation will be concluded, the pro-forma gross NPE ratio  at the end of December 2019 will be 6.9% against 7, 8% today, less than half of 15.5% reached in September 2015. Last December UBI Banca closed a 857.6 million euro gross NPL securitization for which the public guarantee GACS was requested for a senior tranche (see here a previous article by BeBeez).

VeM Report, 2019 was a record year for Italian venture capital which saw investments for a total of 650 mln euro