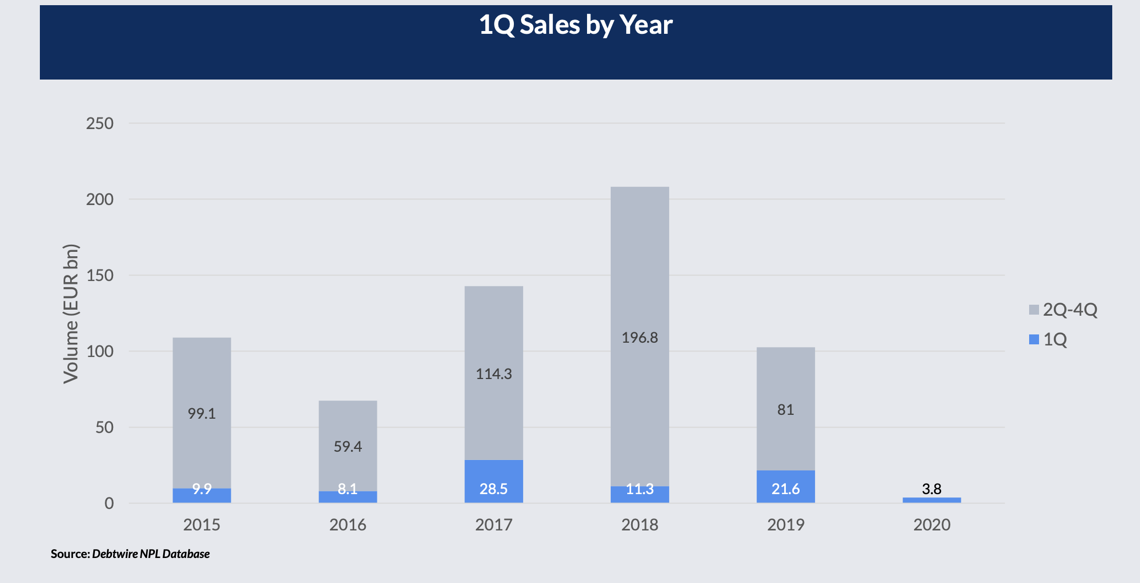 Before the lockdown due to the coronavirus froze the market, some deals  on impaired loans had been closed in Europe so t the end of March NPEs transactions had reached a total gross value of 3.8 billion euros, spread over 13 operations, of which  1.8 billion  euros on Spanish loans, 1.6 billion on Italian loans and 400 million euros for a single deal on Cypriot assets. This was revealed by Debtwire, which also points out that last year the first quarter had seen transactions for 21.4 billions. On the paper, Debtwire adds, there are other 75.4 billion euros of impaired loans on the market, for which, however, the auctions are now on stand-by.

For example, Cerberus Capital Management had made the highest bid for the Project Helix 2 portfolio of 2.5 billion euro mixed corporate and SME impaired loans from Bank of Cyprus, but then the bank announced that the sale would be postponed. In turn, Bain Capital Credit was in pole position for the 1.6 billion euro Project Icon portfolio of the National Bank of Greece. While in Spain M&G Investments and Pimco were the favorites to secure Banco Santander’s 1.5 billion euros re-performing Project Prometeo loan portfolio. Finally, in Ireland, Allied Irish Banks has postponed the auction for the Project Oak portfolio of 1.3 billion residential mortgages until yet to be decided. All this, while in Italy  Intrum has withdrawn from the negotiation to acquire the credit management division of Cerved, after having offered around 500 million euros (see here a previous article by BeBeez).

Debtwire counted 1.5-1.6 billion euros of transactions spread over 10 deals in Italy in the first quarter, down from 5 billion euros spread over 7 deals in the first quarter of 2019. Of the total, 620 millions concern trades on the secondary market. On the Italian front BeBeez actually mapped 19 operations announced from the beginning of the year till today, however for 4  deals gross value was not disclosed. As for the other 15 deals, the total gross value is almost 1.8 billion euros, while, on the paper, at least deals for other 35 billion euros are arriving on the. market. The details of the transactions announced and on their way are declined in the new NPL BeBeez Report, mapping all the deals of the first 4 months of 2020 and adding a 2019 data revision, (the English version will be published tomorrow morning) available for subscribers to BeBeez News Premium (see here how to subscribe for only 20 euros per month). 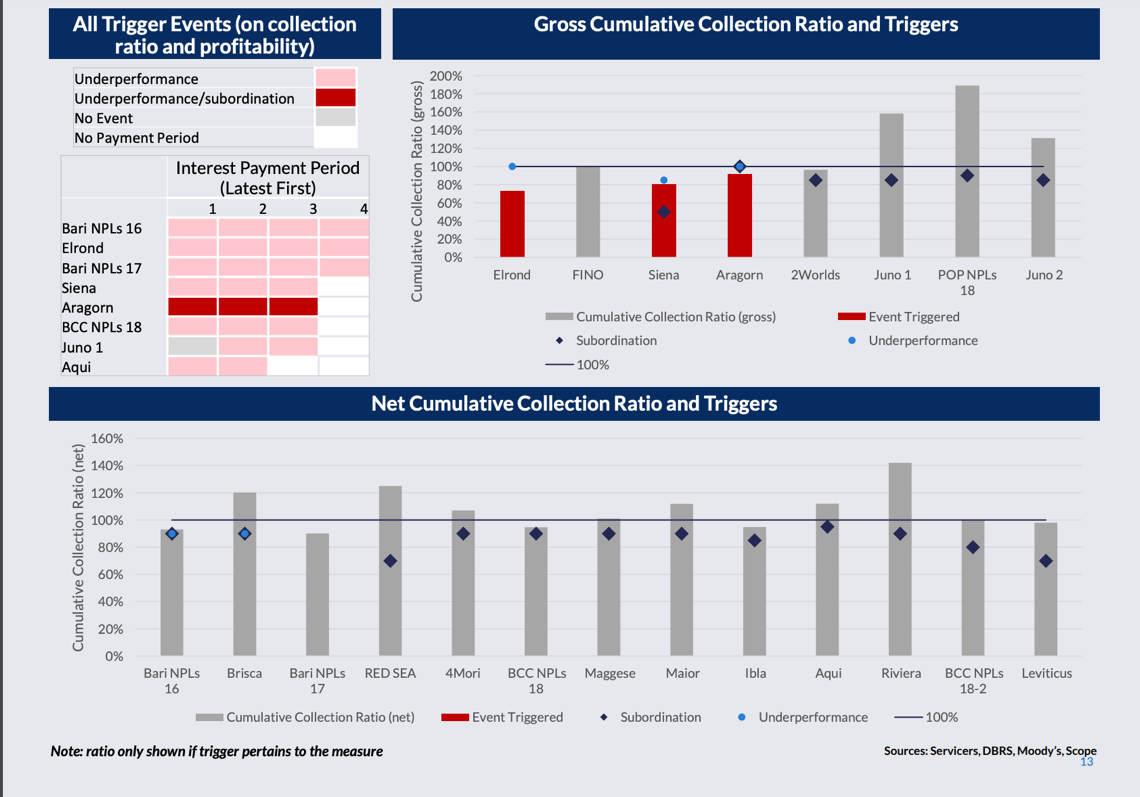 As for the future, Debtwire also points out that the rating agencies DBRS Morningstar, Moody’s and Scope Ratings are all expecting a decline in the securitizations of NPEs in Italy in the coming months, in particular those of corporate SME loans. As for the performance of the securitizations with GACS, Moody’s recently downgraded the ratings of the class A and B notes of the Credito Valtellinese Elrond NPL securitization 2017.

As we know, from 2015 to mid 2019 Italian banks sold over 200 billion of non-performing loans, of which 69 billions through securitisations with Gacs, which resulted in issues of asset backed securities for 16 billion euros, for an average price of 23-24% of the gross value. In particular, senior notes were issued for a value equal to 19% of the total gross value of the securitized portfolios, mezzanine abs for 3% and junior for 2%. The data are contained in the latest sector report published by PwC last December, which precisely out of a total of 19 securitisations with Gacs analyzed, indicated lower than expected performance for about a third of the operations (see here a previous article by BeBeez).

A similar result was also provided by an analysis of Banca Ifis in its latest Market Watch (see other BeBeez article), where out of a total of 11 transactions analyzed it emerged that 5 had not reached the expected gross and net funding targets from the business plan, although five others had passed them instead. As for the average prices of the sales with GACS, Banca Ifis stressed that they are increasing, in line with the increase in the secured portion of the securitized NPL portfolios (see here a previous article by BeBeez). 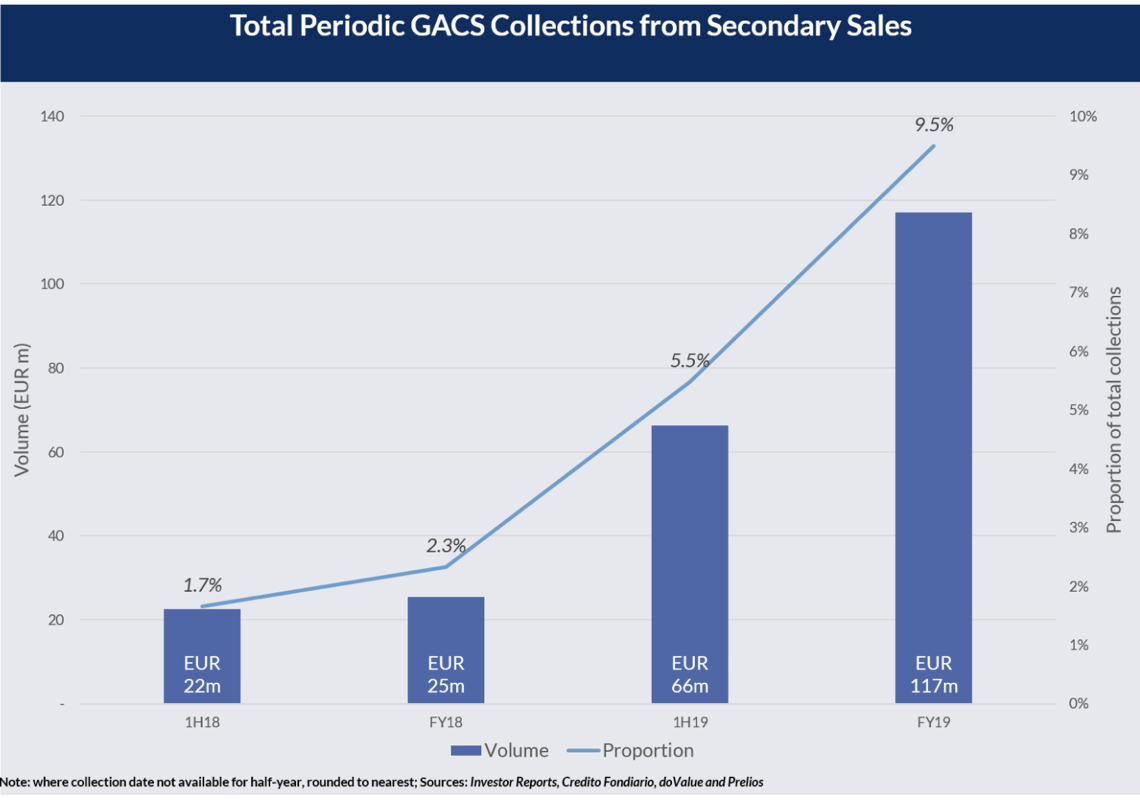 Just to try to increase their performance, many securitization spvs with GACS last year started selling part of the portfolios on the secondary market (see here a previous article by BeBeez). According to Debtwire, in particular, investors such as AnaCap Financial, Balbec Capital, Banca Ifis and Guber Banca last year acquired NPLs for a total of 117 million euros from the  SPVs issuers of notes with GACS managed by Prelios Credit Servicing, Cerved Credit Management, doValue and Credito Fondiario. A small though significant figure compared to the 66 million euros  of 2018 and the figures of the previous years. In total between 2016 and 2019 NPLs for 213 million euros had changed hands on the secondary market from those SPVs to third investors, a figure which represents a 4.7% stake of the total collection of those SPVs in the period.

Npl, YTD deals for only for 1.8 billion euros. Upcoming another 35 billion, coronavirus allowing