The NPL market has restarted in Europe after the stall due to the Covid-19’s lockdown. In particular, the largest number of transactions was seen in Italy and Greece. Debtwire calculated this in his latest report on impaired loans, anticipated to BeBeez.
In total, in fact, in the first half of the year transactions for 30.4 billion euros were concluded, of which 89.8% between Italy (18.2 billion euros) and Greece (9.1 billion). The 30.4 billions compared with deals for as much as 41.8 billion euros 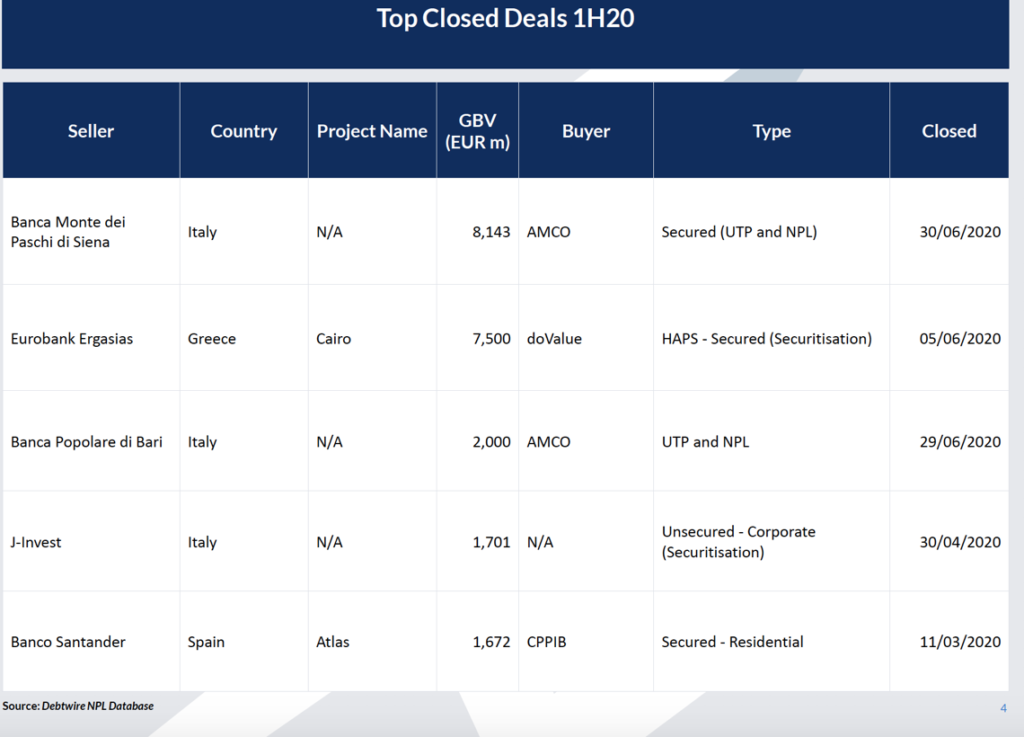 Finally, Debtwire also stressed that European banks are preparing for a new wave of non-performing loans as a result of the Covid crisis. In the first quarter of the year, in fact, the main European banks set aside over 21.5 billion euros to cover losses from bad debts, a figure that is equal to 207% of the 7 billions provisions at the end of the first quarter in 2019.
The largest percentage increase was recorded for banks in the United Kingdom and the DACH area (Germany, Austria, Switzerland) with a + 450% from the same period last year. In particular, the British banks have set aside 7.7 billion euros, with HSBC and Barclays alone providing for 2.7 billions and 2.4 billions respectively, respectively. The largest coverage was posted by the Spanish Santander Group (3.9 billions), with the four largest Spanish banks having posted a total of 6.2 billions coverage, an increase of 140% from 2019.
UniCredit posted provisions for 1.2 billions, of which 900 millions relating to potential losses due to the Covid-19 emergency. Greek banks have posted a total of 1.4 billion provisions, of which 860 millions relating to Covid.

Boom of Npl deals between June and July. All numbers from the first seven months of 2020 in the BeBeez Report