bybebeez
in Bad loans and other NPLs, Crisis & Relaunch, Data&Analysis, Private equity, venture capital and private debt data in Italy
A A
Share on FacebookShare on Twitter

There are 5.103 Italian SMEs risking not to be able to repay their debts and their creditors don’t know that. This is a figure calculated by business infromation provider Leanus in a study commisioned by  MF Npl (the bi-monthly weekly focus on the non-performing-loan market by MF Milano Finanza), after having analysed about 180k financial statements for FY 2015 published by SMEs with one to 200 million euros revenues. All together these SMEs are burdened by 24 billion euros in debts, of which 13.7 billions are bank loans, 6 billion euros are debts due to suplliers and the rest to the Internal Revenue and other creditors.

On the whole, 70% of the 5.103 SMEs are based in Northern Italy, 20% in the Centre and the remaining 10% in Southern Italy and on the islands. At the top of the list is Lombardy (1.543 SMEs), followed by Emilia Romagna (622) and Veneto (580) as those are the regions where a major number companies  have headquarters in Italy.

To see the complete list of the 5103 companies and have access to a complete data set for each company, register for free on Leanus, and ask for an upgrade to the Premium profile, using BeBeez‘s promotion. After that, digit “Le imprese che non potranno pagare tutti i propri debiti (Npl)” in the search window in the upper right side of the homepage.

Leanus’s analysis show that signals of a coming financial crisis are evident 3-4 years before the actual meltdown which is a time period long enough to solve the problem in advance. Which would need however a different approach from lending banks.

This is why banks should look for instruments able to discover in advance every signal of a deterioration of credit risk as was discussed in a workshop organized by Iside together with BeBeez.it last October. 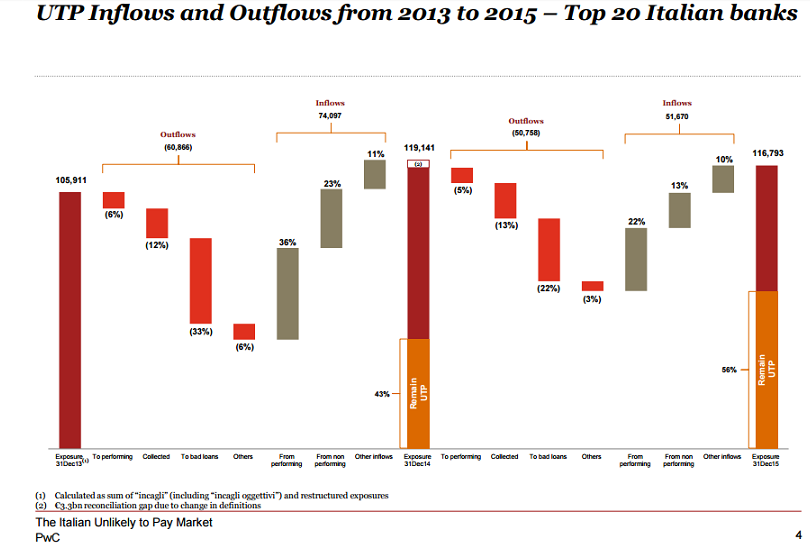 This is why Katia Mariotti, associate partner of PwC, speaking as a guest of a tv talk show by ClassCnbc said that: “The issue of unlikely-to-pay loans becoming bad loans or coming back to performing loans is well on the top of the list for all italian bankers”, adding that “in 2015 conversion rate from Utp to bas loans was of 22%, which was quite a drop from 35% in 2014 and from 49% in 2009” (see here MF Npl), even if the Utp and bad loans stock is still too high”.

That conversion rate for 2015 is in line with the one calculated last December by  Duke& Kay and Sda Bocconi (see here a previous post by BeBeez). And this is crucial also due to the new international supervision rules coming into effect in the next few years as they are going to make unlikely-to-pay and past due loans heavier on banks’ books (see the application of the new international accounting standard Ifrs9 or the new definition of default by the European Banking Association).