UTPs, net book value on Italian banks' balance sheets is 51 bn euros versus 33 bn euros for bad loans, PwC says. Here is a map of servicers with focus on UTPs

byValentina Magri
in Bad loans and other NPLs, Crisis & Relaunch
A A
Share on FacebookShare on Twitter 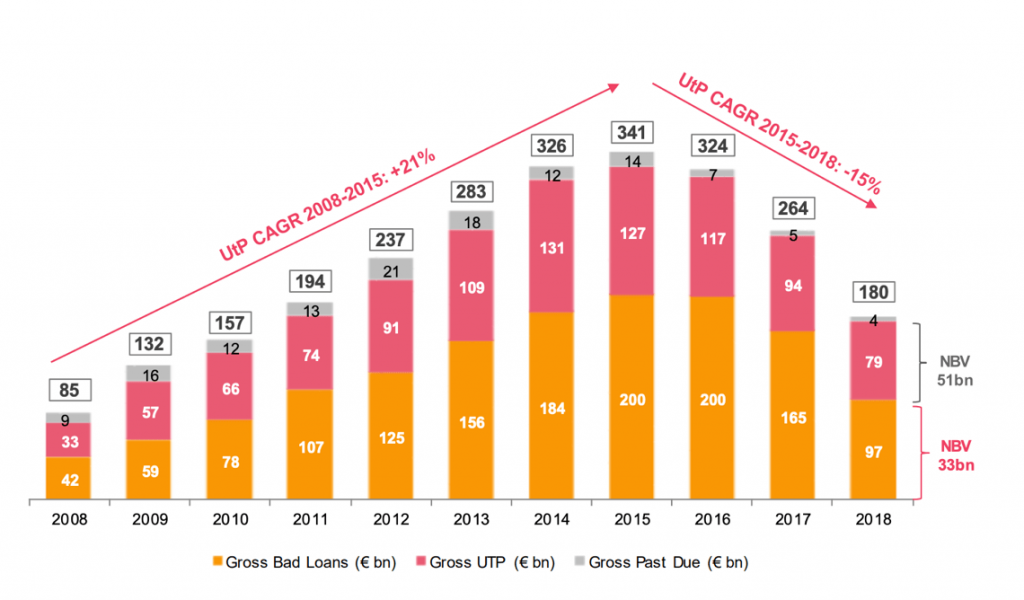 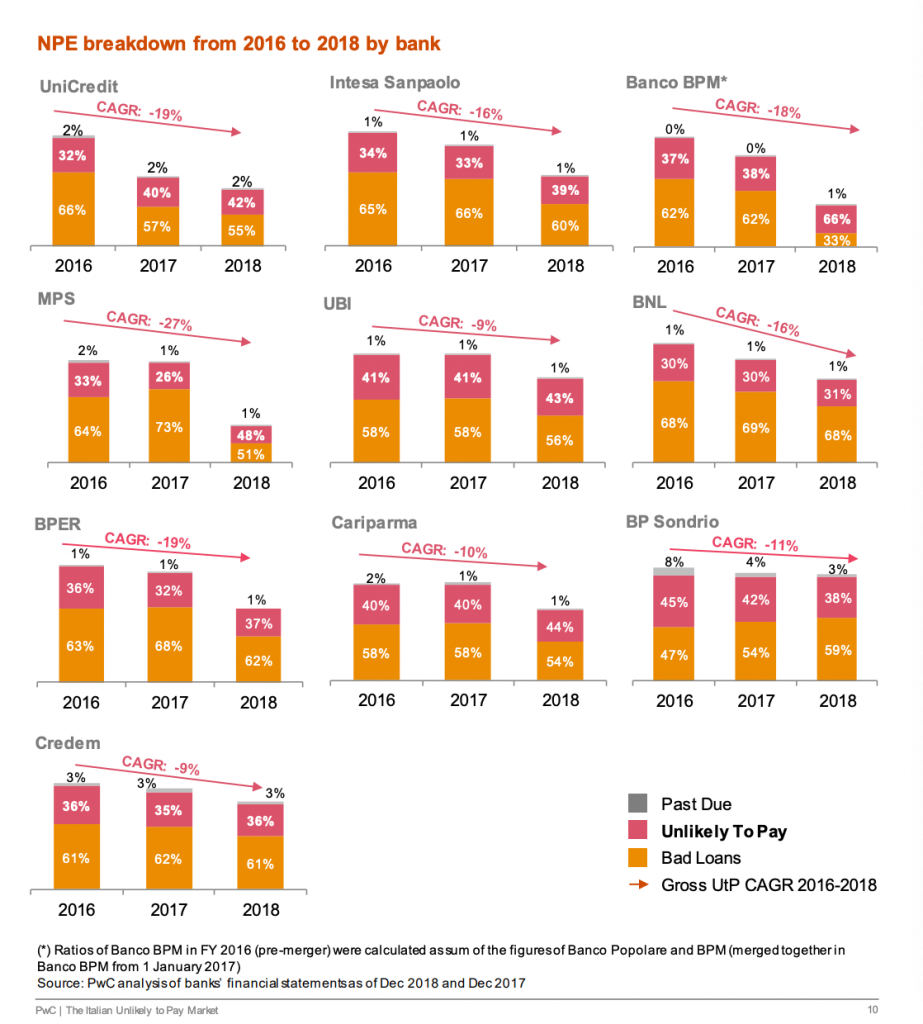 Between 2015 and 2018, 190 billion euros of Italian non-performing exposures have changed hands and at the end of 2018 the NPEs on the books of Italian banks had fallen to a gross value of 180 billions from the 341 billions of 2015 , of which 79 billions are UTPs (from 127 billions in 2015). PwC calculates this in an update on the UTPs market published yesterday (download the the PwC report here), which confirms the anticpations issued by PwC last April during a speech at the NPE R-Evolution event organized by Credit Village in Milan (see here a previous post by BeBeez). Then PwC had stressed that to date NPEs in Italy are 390 billion euros, considering also the approximately 200 billions in portfolio to investors who previously bought them from banks or on the secondary market.
Returning to the UTPs, the net value of those gross 79 billions on the books of the banks is 51 billions, which means a greater figure then the 33 billion euros of net bad loans (97 billion euros gross) on Italian banks’ balance sheets. And this is why this year the focus of all the major iinancial institutions in Italy has shifted to the UTPs whose weight in terms of regulatory capital has n ow increased, following the latest changes to international banking supervision rules. To date, 43% of the total gross impaired loans on the financial statements of the 10 leading Italian banks is represented by UTPs with an average coverage rate of 36%.
At the same time, the servicer companies are also discovering the UTPs market as a new business opportunity to support banks and investors in debt collection, based on a very different approach from the liquidation approach, used to recover bad loans. For UTPs, in fact, it is often necessary to provide new money to debtors, in particular when it comes to companies, to put them in a position to relaunch 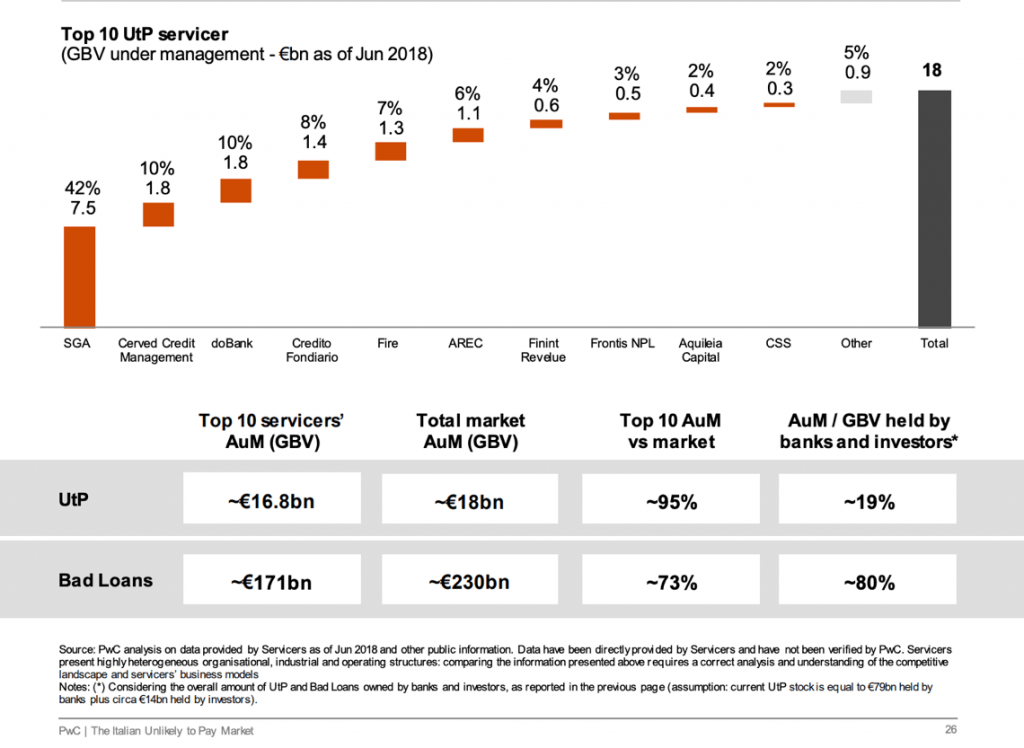 the business and therefore repay their debts .
PwC has mapped the market for specialized UTPs servicers in Italy. What emerges is that to date the UTPs managed by the top 10 servicers are around 16.8 billion euros (GBV) against a total market of UTPs under management of 18 billions, which represent only about 19% of the gross value of the UTPs on the books of Italian banks and investors to date. Cerved and doBank are in first place, with 1.8 billion each managed, followed by Credito Fondiario (1.4 billion), Fire (1.3) and Arec (1.1). On the other hand, the top 10 servicers of bas loans now manage 171 billion euros out of a total of 230 billions of non-performing loans under management that represent about 80% of total bas loans on the books of banks and investors.
This year we have already reached almost 15 billion euros of transactions on the Italian non-performing exposures market since the beginning of January and deals for more than 36 billion are on the way. The data just updated emerge from the BeBeez database, which processes public data (see here the NPLs BeBeez Report May 2019 updated in mid-May 2019), and follows the 101 billion euros gross value of transactions announced in 2018 (see here the NPLs BeBeez Report Year 2018). The BeBeez data for 2019 are higher than the ones considered in mid-May by Debtwire and released in recent days at the Italian Restructuring Forum organized in Milan by the magazine. Debtwire, in fact, compared to 101.3 billion transactions on impaired loans mapped in 2018 (in line therefore with those mapped by BeBeez and which represented practically almost half of the total of 205 billion euros transacted in 2018 at European level), calculates in mid-May that some 5 billion euros transactions have been closed since the beginning of the year and that others are arriving for another 29.9 billions, of which 80% are UTPs. And this, given the weight of the ongoing operation between Prelios and Intesa Sanpaolo (see here a previous post by BeBeez).
The BeBeez figure also takes into account the securitization conducted last January by Bnl Bnp Paribas on an Npl portfolio of 968.2 million euros, 73.4% of which was secured and 26.6% of unsecured positions for which the senior tranche the Gacs was asked, which had not been reported in the press and which BeBeez gave an account a few days ago. The portfolio was sold to the Juno 2 srl securitization vehicle which issued three tranches of securities totaling approximately 265 million euros (see here a previous post by BeBeez). As for the incoming operations, the BeBeez data also considers the securitization with Gacs in preparation by Iccrea Banca and some banks of the group, which should be on a size between 1.2 and 1.4 billion euros (see here a previous post by BeBeez).
The construction sector continued to be the one in greatest difficulty, with numerous companies forced to start restructuring processes (eg Trevi, Astaldi, Condotte, CMC di Ravenna), highlighting an urgent need for consolidation in the industry. According to Salvatore Lombardo, partner of PwC, the reasons for the crisis are “the lack of investments in public infrastructure and a still stagnant real estate market with the exception of the city of Milan”. Nevertheless, “despite the numerous crisis situations underway, the market offers investment and growth opportunities for operators with solid financial capabilities and a clear market strategy.” Alberto Angeloni, partner of the international law firm DLA Piper, on the sidelines of the event explained to BeBeez that he expects the next sectors to go into crisis in Italy will be food, global services and large-scale distribution. During the event, he expressed doubts about the restructuring procedures currently envisaged by the Italian bankruptcy law: “the lack of coordination between the bankruptcy law, the procurement code and the welfare legislation is often the cause of complexity and delays superfluous. An urgent intervention in the matter of the legislator would be desirable”.