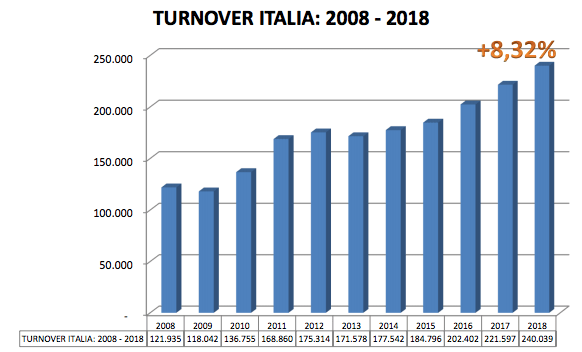 Fausto Alberto Edoardo Galmarini, the chairman of Assifact, the Italian association of factoring firms, and Alessandro Carretta, full professor of Rome’s Tor Vergata University said that in 2018, the Italian factoring market increased its yoy turnover by 8.32% amounting to 240 billion euros (see here a previous post by BeBeez). Mediocredito Italiano (gruppo Intesa Sanpaolo), Unicredit Factoring, and Ifitalia make more than 60% of the market with a cumulated turnover of 59.6 billion, 56.8 billion and 29.6 billion. Italy is the third factoring market in Europe and the fourth in the world.

The bond issuance of Italian food company Fratelli Polli that is part of 50 million euros worth Export Elite Basket Bond and due to mature in October 2027 includes credit lines of 7 million lines that BPER issued (see here a previous post byBeBeez). Marco Fraccaroli is the new ceo of Fratelli Polli that will invest such resources in developing further its foreign subsidiaries and the integration of Valbona, a competitor acquired from distressed businesses operator Europa Investimenti.

Pharmakrymi the company that aims to develop an Italian network of drugstores with the brands Pulker Farma and Pulker Farma Parafarmacie, will list on Milan minibonds worth up to 2 millio euros  (See here a previous post byBeBeez). The liabilities will mature on 18 April 2024 and pay a 5.5% coupon. Pk has sales of 11.3 million, an ebitda of 0.8 million, net profits of 0.1 million (net loss of 0.3 million yoy), and a net financial debt of 5.5 million. Pk belongs to Rocco Crimi (75.86%), Innexto Sicav Sif (15.16%), and to Maria Ester Marinaro, Crimi’s wife, that owns a stake of 8.8%.

Spindox, a provider of system/business Integration, listed on Milan stock market a minibond worth 3 million euros that Zenit sgr and Iccrea BancaImpresa wholly subscribed (see here a previous post by BeBeez). The issuance is in two tranches with an average weighed tenure in the region of 6 years and an average weighed rate in the region of 4.97%. The first tranche has 4.5% yield and matures on 11 April 2025; the second tranche yields 5.20% and matures on 31 December 2024. IT Spindox will invest such proceeds in its organic growth as well as in M&A and debt refinancing. Luca Foglino, Fabrizio Bindi, Paolo Costa, Giovanni Diadema, Mauro Marengo, Giulia Gestri, Alan David Sanna, Massimo Pelle, and Gabriele Canciani founded Spindox in 2007 and own the company that has a turnover of 42.6 million, an ebitda of 2.3 million, and net financial debt of 1.8 million.

Treviso Court started the sale procedure for the Muggia based plant of Italian food company Pasta Zara which is in receivership and is an issuer of minibonds (see here a previous post by BeBeez). The court set 119 million euros as starting price for the auction that will end on 22 May, Wednesday, while on 23 May, Thursday, there will be the communication of the sale’s outcome. Barilla had made an offer for the Muggia plant some months ago at that price so it is expected to bid. Pasta Zara’s majority belongs to the Bragagnolo Family, while further shareholders are Friulia (11.25%) and Simest (11.76%). The company has a gross financial debt of 241 million, of which 178 million are banking liabilities, 73 million of these debts are part of the portfolio of SGA that acquired them from Banca Popolare di Vicenza and Veneto Banca. Pasta Zara total debt amounts to 295.3 million.

Banca del Fucino carried on the securitisation of a portfolio of mortgages worth 150 million euros (See here a previous post by BeBeez). The spv Fucino RMBS acquired the portfolio of performing mortgages that has three tranches: senior (86%, 129 million), mezzanine (4%, 6 million), and junior (10%, 15 million). Banca del Fucino will retain the shares issued by the spv and will use the senior tranche as a collateral for the refinancing transactions with the Eurosistem. The bank will list the senior and mezzanine shares on the Irish and the Italian stock market. The bank has just agreed on a 310 million euros securitization of NPEs with SGA.

B2 Kapital acquired from CentroMarca Banca di Credito Cooperativo di Treviso e Venezia a portfolio of distressed credits worth 46 million euros (see here a previous post by BeBeez). B2 Kapital, whose ceo is Francesco Fedele, is the italian subsidiary of Norway listed B2Holding.

Illimity Bank acquired from Banco Bpm a portfolio of NPLs worth 650 million euros (see here a previous post byBeBeez). Credito Fondiario competed with Illimity for acquiring this portfolio. After such closing the gross NPE ratio of Banco Bpm at the end 2018 lowers from 10.8% to 10.3%.

Davis & Morgan, Milan’s merchant bank that operates in the Npl acquisition and services, will list on Milan market bonds worth up to 10 million euros (see here a previous post by BeBeez). The bank will list a first tranche of 5.5 million whose placement will end on 15 April. These five-years bond pay a 7% fixed rate coupon and will mature in April 2024. The liabilities have an amortizing structure and will repay 25% of the principal at the end of the third and fourth year of tenure, and the remaining 50% at their maturity. Davis&Morgana will invest these proceeds in the purchase of non-performing single name credits backed by mortgages for the acquisition of real estate assets based in Milan and Rome. The Oetker Family, owner of the food company Hero, has 25% of DM. DM chairman Hugh Malim, who previously worked as Italian country manager for Barclays Bank Group, has 6% of DM.

Gross 100 bn euros of bad loans on Italian banks books may be worth just 25.3 bn euro by investors due to Italy’s long COurts procedures. Hera are figures by Cerved and La Scala law firm