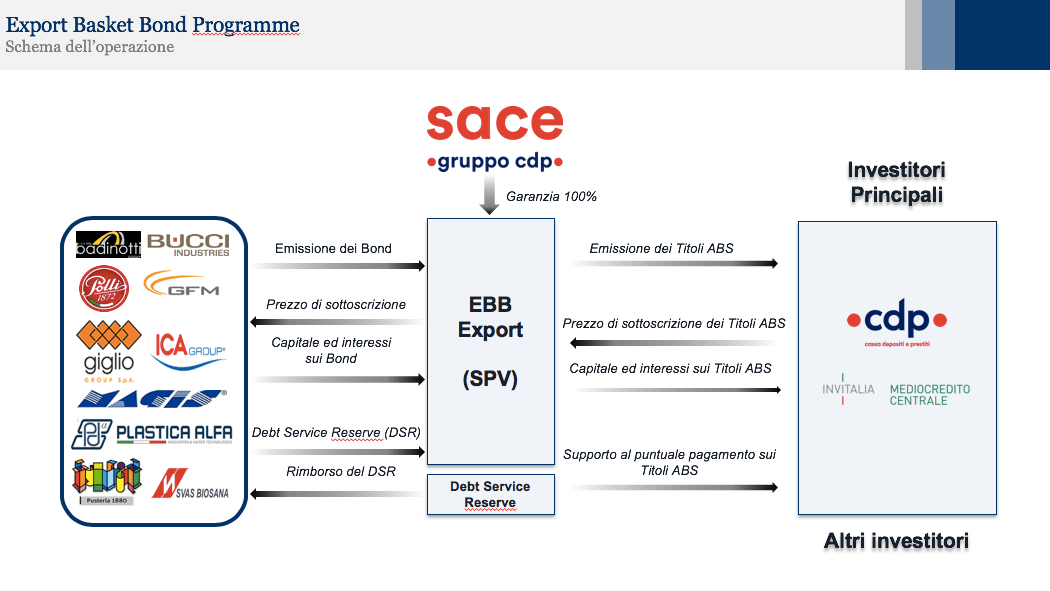 Basket bonds are securities deriving from the securitization of minibonds with similar, but not identical, characteristics issued simultaneously by a group of selected companies.

The securities deriving from this first securitization of the program were issued by spv EBB Export srl, pay a fixed coupon of 2.08%, have a maturity of 8.5 years and an amortizing repayment structure with 2 years of pre-amortization. The securitized  minibonds were issued by 10 Italian SMEs: Badinotti Group, Bucci Automations, Fratelli Polli, GFM, Giglio Group, Industria Chimica Adriatica, Magis, Plastica Alfa, Pusterla 1880 and Svas Biosana (download the profile of the issuers here).

Italy’s governamental guarantee agency Sace has individually issued a guarantee in favor of the SPV for each underlying minibond, up to 100% of the issue value (principal and interest). The underlying minibonds all pay fixed coupons, but at different rates, depending on the premium paid for the Sace guarantee and therefore depending on the relative credit rating. The issuers of the minibonds have a call option to repay the securities in advance by paying a penalty starting from the fourth year from the issue date.

Cdp (anchor investor) and Banca del Mezzogiorno-Mediocredito Centrale subscribed 50% and 40% respectively of the first bond issue, Banca Finint in turn underwrote the bonds, together with other investors, and acted as arranger by means of of its subsidiary Fisg.Banca Finint was assisted by the RCCD law firm, while Sace and Cdp were assisted by the Legance law firm.

In the structure, the deal takes up the fundamental and innovative elements of the first Elite Basket Bond designed and structured by Banca Finint in December 2017, which represented the first Italy’s financial system deal aimed at the world of SMEs and mid-caps, with Cdp that  in that case too had been an anchor investor. On that occasion, securities were issued for 122 million euro, deriving from the securitization of 10 minibonds (see here a previous post by BeBeez).

Oaktree wins the race for the 15 Italian hotels package owned by Castello sgr. Pays 300 mln euros. The US firm mulls to invest till one bn euros in Italy in the hotel sector