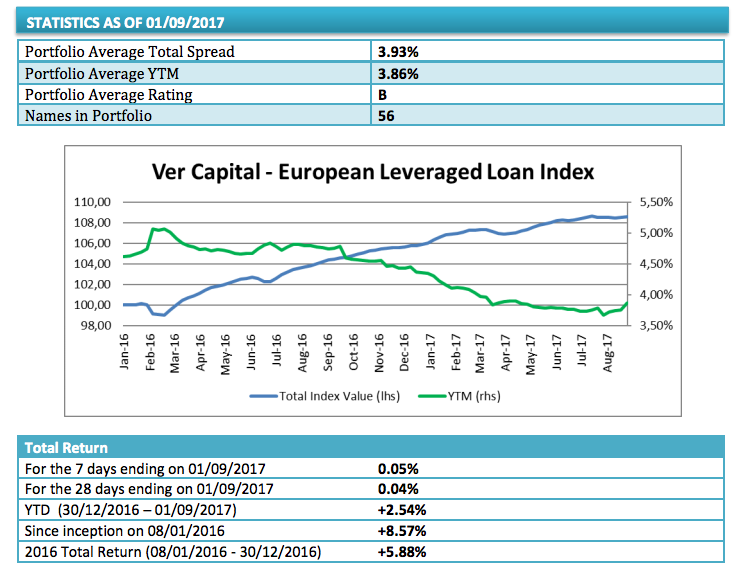 A euro-denominated leveraged loan issued in support of a leveraged buyout by a private equity  firm with a 5-7 years’ maturity paid an average 3.93% yield on September 1st (22bps up from the end of last July when it paid a 3,75% YTM) in line with last May levels and still below the 4.75% YTM paid one year ago.

These are the figures that emerge reading the Ver Capital Leveraged Loan Index, an index that Ver Capital sgr has specifically built for BeBeez and that is updated weekly.

The best performer loan on a weekly total return basis was the one relating to Global Blue (+0.34%), the Swiss shoppingtax-refund payment firm which was bought in 2012 by Silverlake and Partners Group for 1.25 billion euros and mulling to list on a Stock Exchange next year.

The wrost weekly performance was instead the one relating to Flint (-0.65%), a leading global supplier of inks and other print consumables to the packaging and the print media industries which was sold in 2014 by CVC Capital Partners to Goldman Sachs Merchant Banking Division and Koch Equity Development (a subsidiary of Koch Industries).

Leveraged loans market in Europe has a very rich pipeline this September with some 8.5 billion euros of loans set to launch for syndication (see Reuters), with four jumbo financings among the line.

The biggest deal is the 2.35 billion euros-equivalent financing which is going to be launched to support the delisting of German generic drugs maker Stada by Cinven and Bain Capital private equity funds. The deal, which includes a 1.65 billion euros first-lien loan and a 300 million euro-equivalent first lien loan in pounds, together with a 400 million euros credit revolving line, has been launched in the last few hours (see Reuters). Stada’s buyout is a 5.42 billion euros deal, including additional 180 million euros that Cinven and Bain are paying after having agreed to pay an additional price to convince Elliott hedge fund to sell its stake in the company (see Reuters).

Coming to the market is also an euro and pound financing package for 1.5 billion euros equivalent to support the buyout of UK payment processing firm Paysafe by Blackstone and CVC Capital Partners.