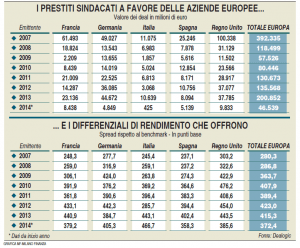 Italy’s biggest insurer Assicurazioni Generali bets 700 million euros on performing high yield private debt of enterprises with a particular focus on senior secured loans,  MF-Milano Finanza writes. Generali followns than an already consolidated trend in Europe by institutional investors.
Private equity and hedge funds with a specific skill in companies’ restructuring are looking for non performing and/or problem loan in European banks’ portfolios. A good example is Intesa Sanpaolo and Unicredit’s common project on problem loans supported by Kkr and Alvarez and Marsal (see a previous post of BeBeez). However many other funds are looking for good opportunities in the performing loans market both on secondary and primary market (direct lending).
Dealogic calculates that in 2013 more than 200 billion euros of new syndacated loans have been issued to European companies up from 146 billions in 2012 with a yield spread of 413 basis points down from 425 bp while since January 2014 new loans issues have been 46 billions with a 372 bp of average yield spread.
Coming back to Generali, last Thursday April 24th Fabrizio Vitiello, Generali’s Milan-based head of asset management and alternative fixed income told  Bloomberg that Generali Deutschland Holding AG will allocate as much as 400 million euros to leveraged loans, in infrastructure loans and in loans to small and medium-sized enterprises in Germany. “We are currently in the process of building up a number of alternative fixed income investments such as senior secured loans, loans to small and medium-sized corporations as well as infrastructure and leveraged loans,” Vitiello said and added: “We invest predominantly via specialized funds, positioning ourselves on the more senior part of the capital structure.”
Last March Generali Group announced the setup of Generali Global Private Corporate Credit, a  300 million euros alternative fixed income fund for assets of Generali Vie, the Group’s French life insurance company. The fund will consist of investments in loans to mainly European companies with a focus on France. The respective mandate has been given to BnpParibas Investment Partners (download here  the English press release).