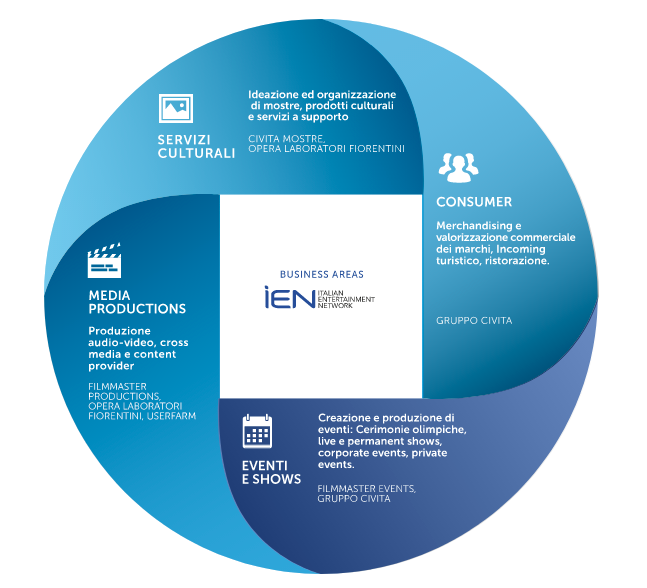 Italian Entertainment Network (IEN), an Italian media content producer and cultural events manager, controlling Filmaster Group and Civita Cultura,  issued in a private placement two secured bonds for a total size of 36 million euros, which have been subscribed by Pricoa Capital (Prudential group) and listed at the Wien Stock Exchange.

More in detail, one bond was issued with a 26 mln euros size maturing in Aprile 2023 while the second was issued in two tranches for a total 10 mln euros size maturing in April 2024. In teh deal IEN was advised by  Palladio Corporate Finance as financial advisor, studio Chiomenti as legal counsel, New Deals Advisor and PwC as for the due diligence activities and  EY as tax advisor. Pricoa was instead supported by Morgan, Lewis & Bockius and Simmons & Simmons as legal counsels.

IEN group, which reached 160 million euros in revenues in 2017, was born as an integration of  Filmmaster Group and Civita Cultura and it is now a point of reference in the international market for the production of media content, the promotion, organization and management of cultural, public, corporate and private events and for the wide world of services and spectacular products for the B2C.

The integration project, announced in December 2013,  was financed in September 2014 thanks to the support of Fondo italiano d’Investimento which acquired for 3.3 million euros a 15% stake in the capital of Filmmaster Group, a company specialized in advertising production with its subsidiary  Filmmaster Productions and in bid events promotion with its subsidiary Filmmaster Events. Fondo Italiano also subscribed bonds issued by Filmmaster for 7.3 million euros. Film Master Group was then controleld by Italian Entertainment Group, which in turn was owned by entrepreneurs Luigi Abete, Aurelio De Laurentiis, Diego Della Valle and the Haggiag family.

That deal brought under a unique operative holding all IEG shareholding stakes in Filmmaster Group, in Civita Cultura (a leading company in the development of museum services and active in the promotion of cultural events abroad) and in CineDistrict Entertainment. For that reason the deal  involved the major shareholders of  Civita Cultura or Costa Edutainment Group, D’Amico Società di Navigazione, Api, Fondazione Venezia, Editoriale Progetto e Servizi (the operative sub-holding of Gruppo editoriale A.Be.T.E).

Shareholding stakes in Filmaster previously owned by Fondo Italiano d’Investimento sgr are now in the portfolio of some funds managed by Neuberger Berman and NB Aurora, the Italian investment veichle managed by Neuberger Berman and listed on the Miv segment of the Italian Stock Exchange starting from today, after having raised 150 million euros from institutional and professional investors.