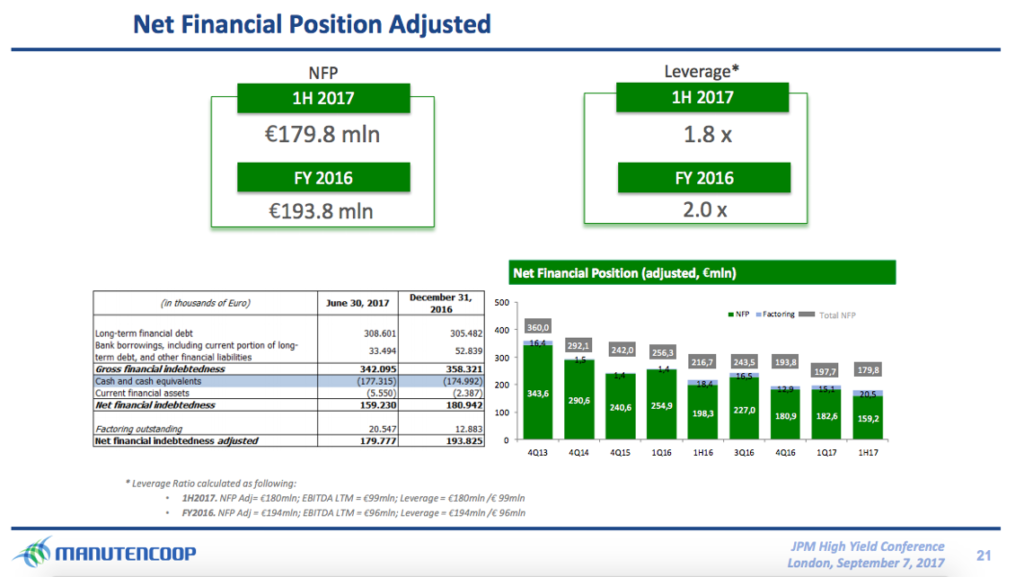 In order to reach this target, US hedge fund Elliott is said to be on talks with Manutencoop Società Cooperativa in order to issue a 180 million euros financing, Il Sole 24 Ore wrote.

Actually last June Manutencoop Società Cooperativa announced that it had decided to buyback that 33.2% stake from the minority shareholders funding the deal by issuing a new 420 million euros bond (through its subsidiary CFM spa) which, together with 167 million euros of company’s cash, would have also helped to refinance company’s debt (see here a press release by Moody’s). However the bond didn’t win strong investors’ demand so the issue size was shrinked to 360 million euros and the yield was raised to 9% from 8.5% (see here a previous post by BeBeez).

MFM indirectly confirmed that such talks are on their way saying in a press release that it continues to evaluate several alternative solutions with the objective of facilitating the exit of the current minority shareholders in its subsidiary, Manutencoop Facility Management and to acquire 100% of MFM. No final agreement has been entered into in respect such alternatives.

That’s why MFM’s H1 2017 Financial Interim Report explains that MFM would have issue a new equity or debt instrument for 50 million euros in the next few months.

In Summer 2016 (see here a previous post by BeBeez) MFM’s financial shareholders (Private Equity Partners sgr, 21 Investimenti sgr, MPVenture sgr, Sviluppo Imprese Centro Italia sgr, NEIP II, IDeA Capital Funds sgr and Cooperare spa, Unipol Banca e Mediobanca) signed an agreement to raise their stake to 33.2% of Manutencoop’s capital, while Manutencoop Società Cooperativa retained a 66,8%. The stake was transferred last October 7th and the agreement between the counterparts included that starting in January 2017  exit procedures would be stared with the aim of a sale or a listing on the Italian Stock Exchange.

Last January MFM’s shareholders have been receiving some unsolicited expressions of interest for control of the leading Italian facility management company (see here a previous post by BeBeez). Among potential investors Pai Partners and BC Partners were said to be looking at the deal. In June however a different way was chosen with the bond issue.