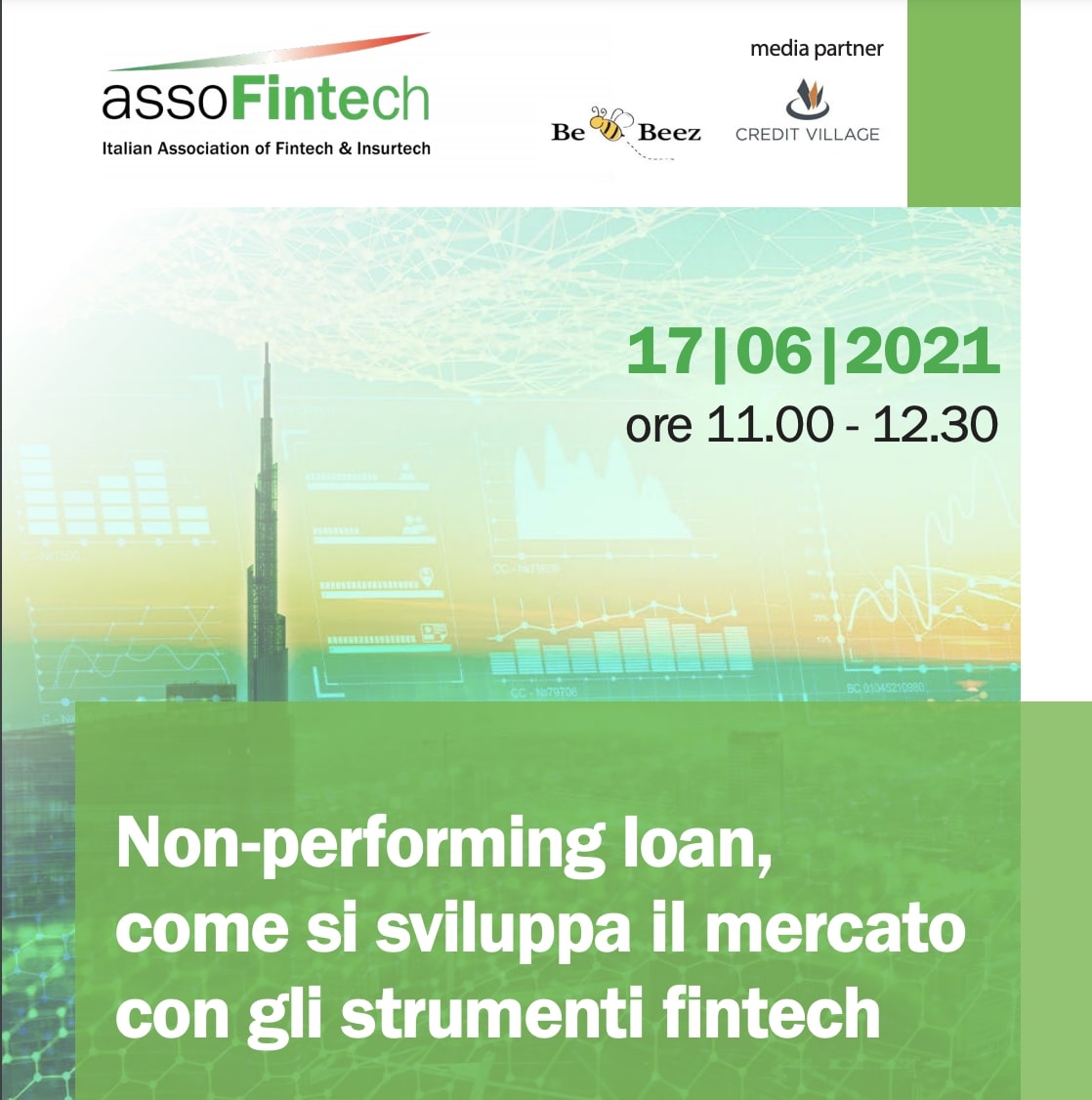 Today June 17th, Thursday, Assofintech will hold a webinar at 11 AM about NPLs and fintech and for which BeBeez will act as media partner. Click here for further information and signing up. Stefania Peveraro, the Editor in Chief of BeBeez and director of Assofintech, will moderate panels with Maurizio Bernardo, the chairman of Assofintech, Gabriella Breno, ceo of Prelios Innovation, Lorenzo Rigatti, founder and ceo of Realhouse and Blockinvest, Lanfranco Brasca, Technology Director and Head of Cloud Engineering of Oracle Italia, Mirko Briozzo, Deputy General Manager & Chief Business Officer of Credito Fondiario Aste per esecuzioni immobiliari, Giulio Licenza, cofounder and CBDO of Reviva

Sources said to BeBeez that Consob, the Italian stock market regulator, authorized Taurus to start its fundraising (see here a previous post by BeBeez). Taurus is an investment vehicle of Polis Fondi sgr for acquiring notes of securitizations of NPLs of Italian banks. The fund has a fundraising target of 2.5 billion euros and Polis launched it in partnership with Cerved Credit Management and PwC. Sources said to BeBeez that between 2021 and 2023, Taurus will invest 500 million for acquiring NPEs with a face value of 2.5 billion while attracting external resources of 500 million for purchasing the liabilities and supporting the relaunch the business of the borrowers.

Milan-listed BGS Club Spac, a vehicle that targets distressed real estate assets, closed a capital increase of 4.7 million euros through the issuance of shares related with the value of investments and NPLs (see here a previous post by BeBeez). Milan-listed Borgosesia, who launched BGS in June 2020, will subscribe 59% of the NPLs. BGS also decided to launch a new capital increase of up to 1 million and to call a meeting of its shareholders to request another one of up to EUR 7 million.

Intesa Sanpaolo is mulling the sale of Portland, a portfolio of distressed leasing credits with a face value of 1.1 billion euros (see here a previous post by BeBeez). The portfolio is of interest to Bain Capital Credit, Credito Fondiario and Intrum – Deva Capital (an investor in Npl that Banco Santander launched in 2019) which is currently front running.

Milan Court accepted the receivership plan of Byblos, an Italian fashion brand (see here a previous post by BeBeez). Byblos aims to wholly pay its senior creditors and pay 20% of unsecured credits. In 2019, Byblos posted sales of 3.4 million, an ebitda of minus 16.9 million and equity of minus 17.3 million.

CIN (Compagnia Italiana di Navigazione) and its controlling shareholder Moby filed with Milan Court a new receivership application in order to avoid bankrupcty (see here a previous post by BeBeez). Milan Court prosecutor Roberto Fontana previously asked for the banckruptcy of CIN who didn’t reach an agreement with 60% of its creditors. The whole group has debts for 640 million euros.

Italian turnaround investor QuattroR sgr is holding talks with the lenders of fashion firm Trussardi for acquiring the company’s liabilities (see here a previous post by BeBeez). The fund owns 60% of the business since February 2019 and offered to pay 15% of the face value of the credits of Bnl, Unicredit, Intesa Sanpaolo, and Mps. However, the banks asked to improve such a bid. In March 2018, these lenders, Banco Bpm and Ubi Banca signed a financing cotract of 51.5 million while the company’s shareholders subscribed a capital increase of 5 million. Trussardi has sales of 122.6 million euros, an ebitda of minus 16.2 million and net debts of 52.8 million.

Banca Sella allocated one billion euros for financing green startups and SMEs that aim to contribute towards reaching the 17 sustainable development targets of the 2030 Agenda of the United Nations (see here a previous post by BeBeez). Mediocredito Centrale (Mcc) or the European Investment Fund (EIF) will provide their warranty on the financing facilities.

Associazione Nazionale Esercenti Cinema (ANEC), the Italian association of theaters and cinemas, launched a sale of tax credits with the support of Groupama Assicurazioni and Phinance Partners (see here a previous post by BeBeez). Groupama acquired tax credits for 5 million euros but could purchase further amounts.

Banca Sant’Angelo, Irfis Finsicilia, Frigiolini & Partners Merchant (F&P), and Fundera launched Pluribond Trinacria for supporting the Sicily-based companies (see here a previous post by BeBeez). Irfis Finsicilia will be the anchor investor while Banca Popolare Sant’Angelo will screen the borrowers. Banca Sant’Angelo and Irfis will guarantee the subscription of a share of each test-issue in view of attracting the attention of other investors preferably based outside the of Sicily, who will be able to invest through the fintech platform of Fundera (placement agent that is part of F&P). The first issue of Pluribond Trinacria will involve a group of companies that will issue single minibonds of 0.2 – 2 million euros. All the issues can have the same maturity and get the warranty of MCC or Sace-Simest. Sign up here for BeBeez Newsletter about Private Debt and receive all the last 24 hours updates for the sector.

Impresa Italia, a fund that Riello Investimenti Partners launched in June 2020 reached its first fundraising milestone of 73 million euros ahead of a final target of 150 million (see here a previous post by BeBeez). Alberto Lampertico heads the investment team of Impresa Italia who will invest in mid and long term debt of Italian SMEs. FOF Private Debt Italia and European Investment Fund (EIF) acted as anchor investors. Riello Investimenti Partners is one of the investors that BeBeez Private Data monitors (find out how to subscribe for only 110 euros a month).

DOTX, a vehicle of YouniteStars, received from HI CrescItalia Pmi Fund, managed by Hedge Invest sgr, a direct lending facility of 3 million euros (see here a previous post by BeBeez). The fixed rate senior unsecured facility has a tenure of 5 years and is due to mature on 30 June 2026 with a quarterly repayment plan after a pre-amortisation period. DOTX provides refurbishment services for iPhones and will invest the borrowed resources in its proprietary technology and working capital.