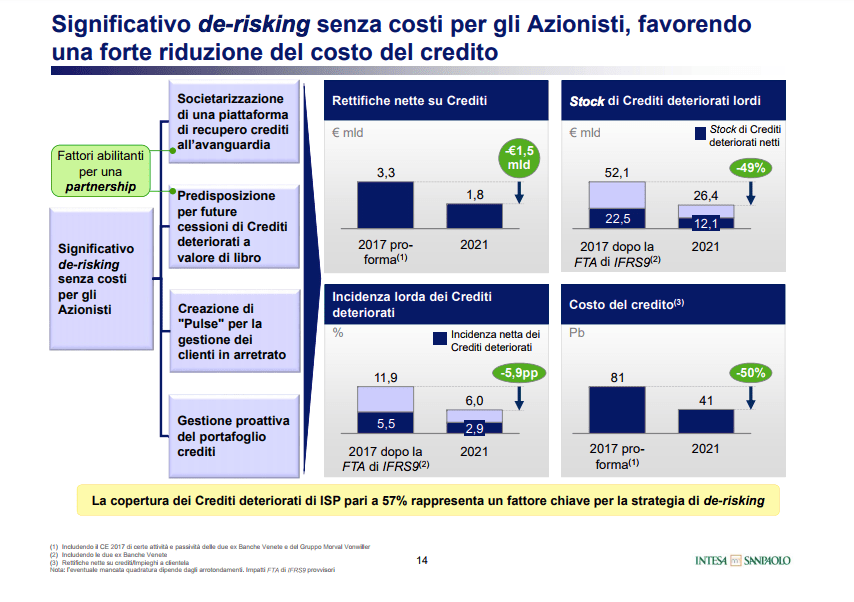 Italian private debt and NPLs are still of interest to domestic and international investors. Here is a roundup of news starting last Feb 7th.

Carlo Messina, the chief executive officer of Intesa Sanpaolo, said that the firm aims to half its gross non-performing loans (NPLs) to 26.4 billion of euros by 2021 from the current amount of 52.1 billion of euros and to achieve an adjusted figure of 12.1 billion of euros from current 22.5 billion of euros (see here a previous post by BeBeez). The bank will raise its reserves for NPLs to 57% accordingly to accounting rule IFRS 9 which is valid since January the 1st 2018. In order to achieve such results, the bank will invest 30 milliono of euros in IT assets for data analysis, and the platforms for servicing and handling NPLs. These will belong to a newco that Intesa will create to manage the activities of leasing and ordinary credit and to Re.O.Co. (Real Estate Owned Company). The bank is also holding talks with Norway’s Lindorff-Intrum Iustitia and China’s CEFC, two credit recovery companies, to sign a partnership. Capital Light Bank, which is in charge of managing non-performing and non-core activities and participations, and Pulse, an Intesa’s unit currently in charge of retail credit giving early signs of bad performance, may also help Intesa to supply advisory services for credit portfolios of small and mid-size banks and corporates.

Messina said that the bank would appoint a Chief Lending Officer for mid-market companies for adopting a proactive approach to the management and restructuring of credit for small and mid-caps. The Chief Lending Officer will also control the activity Restructuring Farm 2.0 that will offer its services to bigger businesses in distressed or pre-distressed situations and hire a further 100 professionals. The activity of this unit will include the proactive coverage of investors in distressed assets that can invest up to 3 billion of euros of fresh resources in the Italian market. Intesa will also create an Active Credit Portfolio Management unit that will support the CFO for a more dynamic management of prime credits portfolios aimed at improving the risk\yield profile.

US-based firm Taconic Capital acquired from UBI Banca a gross credit of 49 million of US Dollars (see here a previous post by BeBeez). The debtor is Italian shipping company Gestioni Armatoriali, that belongs to Nicola Coccia, Bruno Castaldo and the Bazzi family and that applied for receivership in February 2016, when Deutsche Bank stopped in Panama the ship Mare di Venezia. In 2015 the German firm acquired from peer Commerzbank a mortgage that Gestioni signed and became the owner of  such vessel given as collateral. Deutsche Bank purchased such credit from Commerzbank paying it less than 50% of its nominal value of 91 million of US dollars. Gestioni Armatoriali signed for such a debt for acquiring four vessels, and has debt of 285.7 million of US dollars with Deutsche Bank, Mps, Banco di Napoli, Banca Popolare di Novara and Interbanca. At the end of 2016, Gestioni Armatoriali was negotiating a six years debt restructuring plan  including an upfront payment of part of the credits and a reschedule of payments.

Naples Court said that the creditors of Giuseppe Bottiglieri Shipping Company might discuss only the offer of Bain Capital Credit for the control of the company (see here a previous post by BeBeez). The financial firm was competing with Greek shipping group Oceanbulkand, and Naples-based Augustea Holding, of the Zagari family. Last year in July, Bain Capital, which hired Mediobanca as financial advisor, created the newco Punta Carena and submitted a restructuring plan in agreement with the Bottiglieri family. Bain Capital was then willing to pay 120 million of US dollars for buying all the company’s banking debt which is worth 419 million euros. However, in early February Bain Capital decided to offer 205 million euros, as Giuseppe Bottiglieri Shipping Company stated in a press release, adding that “creditors are to vote within 20 days starting from the day of their meeting (which was Feb 7th, editor’s note). Bottiglieri’s main lenders are Unicredit , Bper , Mps , Mps Capital Service, Banco di Napoli (Intesa Sanpaolo ), Ubi, Unicredit Luxembourg and Bnl BnpParibas. Oceanbulk and Augustea tabled an alternative proposal through the newco Lighthouse for taking on 250 million euros of secured debt and converting the left amount of liabilities in equity financial instruments for the lenders.

Imprima, textile printing specialist, shops in the US and buys City Prints and Premier Fabrics