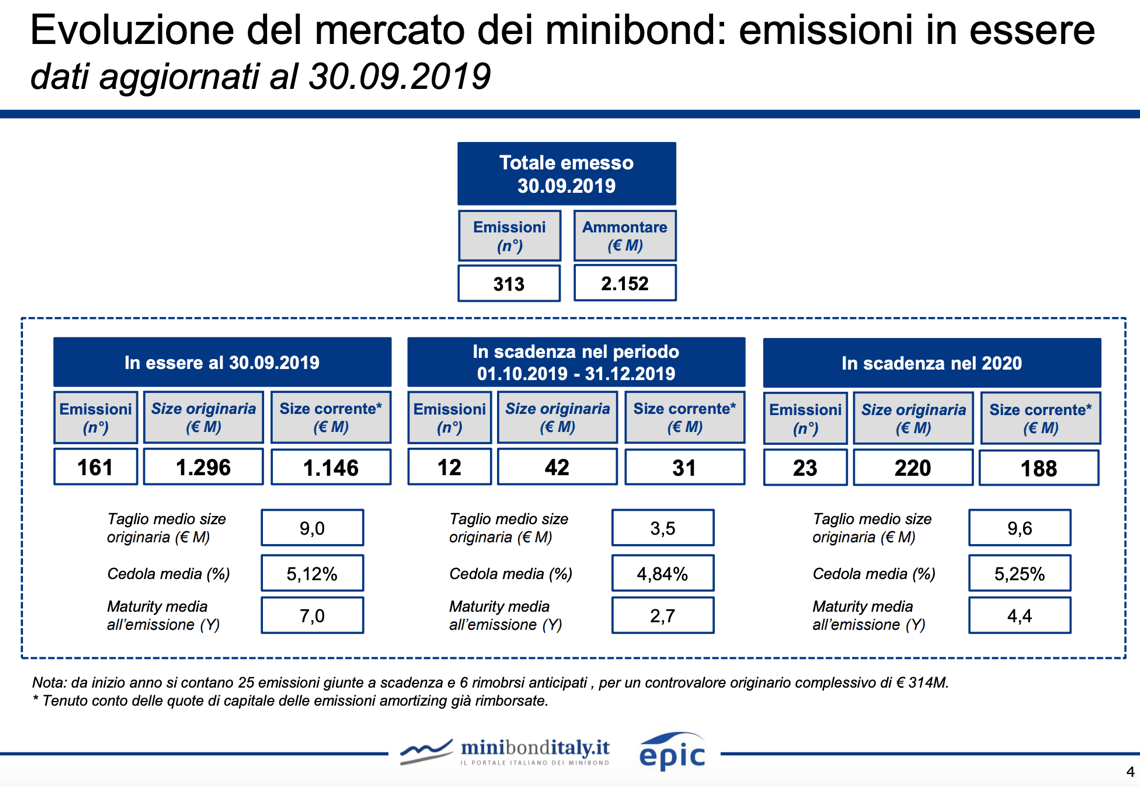 At the end of 3Q19, the minibonds listed on Milan ExtraMot Pro3 worth up to 50 million euros were 161 for a cumulative value of 1.146 billion, says Barometro Minibond, the report of Epic and MinibondItaly.it (see here a previous post by BeBeez). On average, such issuances have a value of 9 millions, pay a 5.12% coupon with a 7 years term. By the end of 2019, 12 issuances worth a total of 31 millions are due to mature. Such bonds are worth on average 3.5 millions, pay a 4.84% coupon and a median term of 2.7 years. In 2020, bonds worth a total of 188 millions will come to maturity.

BeBeez is the media partner of the ALT-Finance Day of Innexta – The Commerce Chamber for Finance and Credit that will take place on 21 November at 9:30 AM in Milan at Palazzo Turati, Via Meravigli 9/B (see here a previous post by BeBeez). You can register here

Italian fresh fruit distributor Unifrutti raised 140 million euros by issueing a senior secured bond  (see here a previous post by BeBeez). Carlyle Credit Opportunities, managed by The Carlyle Group, entirely subscribed the bond due to mature in 2026 and paying a 7.5% coupon. Marco Venturelli is the ceo of Unifrutti which has sales of 700 million with an ebitda of 70 million and belongs to the founding family De Nadai. Credit Opportunities has resources of 2.4 billion euros and provides loans, senior debt, mezzanine debt, convertible bonds and further debt and semi-equity instruments. Nicola Falcinelli is a managing director of the fund and is based in London.

Milan-listed paytech Nexi aims to issue senior notes, in one tranche or more for a total of 825 million euros and due to mature in 2024 and/or 2027 (see here a previous post by BeBeez). The company aims to refinancing the 825 million bond with a 4.125% coupon and due to mature on 1 November 2023 that issued in May 2018. Nexi was listed last April and it is still controlled by Advent International, Bain Capital and Clessidra private equity funds.

Blastness, an IT provider for luxury hotels, issued a 3 million euros minibond that Anthilia Capital Partners (2.5 million) and Banco di Sardegna (part of Bper) subscribed (See here a previous post by BeBeez). This two-tranches issuance is due to mature on 30 June 2026 with a 6% yield and an amortizing reimbursment with 24 months of pre-amortization. The tranche that Anthilia subscribed has the warranty of the Italian Ministry of Economic Development. Blastness has sales of 6.6 million (+26% yoy, and a 10-years CAGR of 21%), an ebitda in the region of 1.25 million (+46% yoy).

Equita Private Debt Fund financed private equity Aksìa Capital for the acquisition of  Primo Group dental clinics from French private equity firm ArchiMed which in turn acquired a majority stake in OasiMedica  dental clinics from the founder Claudio Semperboni (see here a previous post by BeBeez). Semperboni will keep a minority and an operative role in OasiMedica. More in detail, Equita’s fund paid one million for a minority of Primo group and subscribed a subordinated bond of 7 million euros that financed Aksia’s acquisition. Banca Ifis also provided a senior loan. OasiMedica has sales of 5.3 million and an ebitda of 0.386 million.

The investment in Primo Group was the last one for Equita Private Debt Fund  which is now fully invested. Equita Group has then launched the fundraising of its second private debt fund with a target of 200 million euros  (see here a previous post by BeBeez). Paolo Pendenza, the head of private debt activities of Equita Capital sgr, the mnaging company of the new fund, said that he expects to reach a first closing in early 2020 and close the fundraising after 12 months. The new fund will focus on senior unitranche and subordinated debt in support of private equity transactions with a 5 – 7 years term. The fund is expected to yield  a gross 9.5% Irr. EPDF is one of the investors that BeBeez Private Data monitors. Find out here how to subscribe to the Combo Version that includes the reports and the insight views of BeBeez News Premium 12 months for 110 euros per month.

Italian fashion retailer Piazza Italia posted revenues of 391.6 million euros (-4% yoy) and an adjusted ebitda margin of 4.9% (See here a previous post by BeBeez). The company received a B1.1 rating from Cerved. Piazza Italia’s net adjusted financial debt is of 35.6 million (50.7 million the previous year). In 2018, Piazza Italia issued a 12 million minibond due to mature in 2024 with a 5.25% coupon and an amortizing reimbursement structure. In July 2018, Piazza Italia issued a 6 years 3 million bond that Unciredit entirely subscribed. The Bernardo Family founded the company in 1999.

Italian producer of chemical products for agriculture Sipcam Oxon received a 90 million euros financing from Intesa Sanpaolo, Cdp, Bnl Gruppo Bnp Paribas, and Crédit Agricole Italia (see here a previous post by BeBeez). Banca Imi acted as agent and structured the financing together with Cassa depositi e prestiti and Bnl Gruppo Bnp Paribas (mandated lead arranger). Such financing consists of 7-years term lines, a refinancing facility of 50 million, a Capex financing of 30 million, and a revolving credit facility of 10 million. Such resources will support the company’s organic development plans. In June 2018 Sipcam and Oxon Italia, two companies that the Gagliardini and Ciocca families founded in 1946 and 1970, merged and created Sipcam Oxon. In April 2015, Oxom issued a minibond of 8 million listed on ExtraMot Pro due to mature in 2021 and paying a 5.5% coupon. Pioneer Progetto Italia and Iccrea Banca Impresa subscribed the bond. In September 2014, Sipcam issued a 15 million minibond due to mature in 2019 with a 6.5% coupon. Sipcam Oxon has sales of 545.7 million, an ebitda of 57.7 million, and a net financial debt of 140.3 million.

Banca Popolare of Alto Adige (Volksbank) sold 55 million euros of NPLs to the British private equity fund Arrow Global. The portfolio is a mix of secured and unsecured loans to retail and corporate customers. The deal is part of a larger multi-originator transaction worth 346 million euros, which involved 35 cooperative credit banks, rural banks and cooperative banks (33 of the Cassa Centrale Banca group and 2 independent) (see here a previous post by BeBeez). The deal had been anticipated to BeBeez last May by cassa Centrale Banca’s cfo Fabrizio Berti, who then spoke of a deal that could have involved 39 banks for a total of 360 million euro (see here a previous post by BeBeez).

Intrum in pole postion to by NPEs division of Milan-listed Cerved Group. Bain Capital and doValue are studying the dossier too

Ferretti Group’s listing project sanks. The luxury yachts maker will go for a private placement of a 30% stake