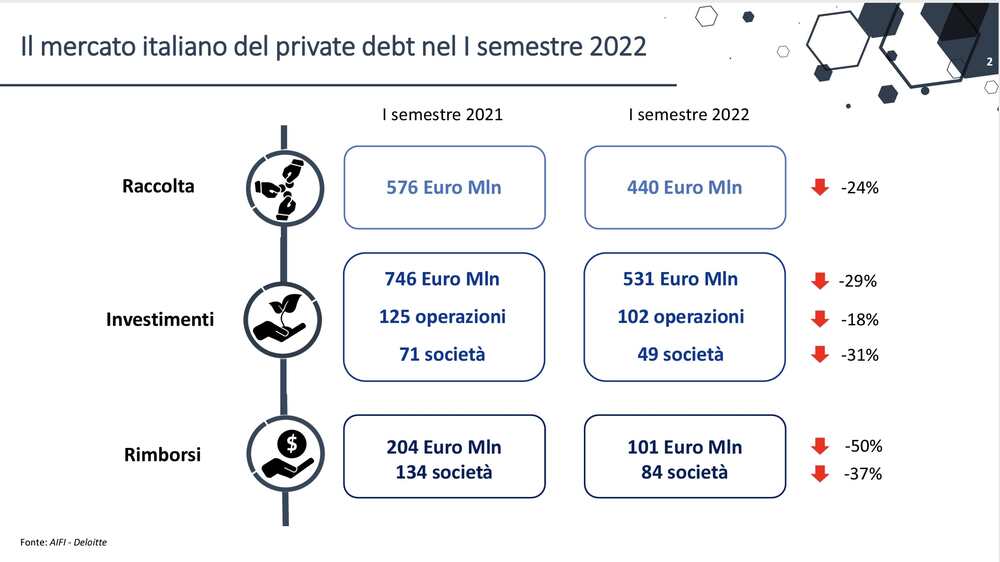 Private debt funds activity declined in Italy in the first half of the year, with investments amounting to only 531 million euros (from 746 million in the first half of 2021), spread over 102 deals (from 125) and 49 companies (from 71), with domestic players accounting for 62% of the number of deals, while 70%
of the amount was invested by international players. This emerges from the semi-annual survey conducted by AIFI in collaboration with Deloitte, which highlighted the lack of transactions worth 100 million or more (see here a previous post by BeBeez). The data as usual refer only to the activity of institutional players active in the private debt segment. Digital lending platforms, banks, transactions related to loans provided to buyout vehicles, loan securitizations, and purchases of performing loans and UTPs are excluded. Hence this is the big difference in relation to BeBeez Private Data, which instead also maps those markets. Thus, as highlighted in the BeBeez Report of the First Eight Months 2022, published last September (available to BeBeez News Premium and BeBeez Private Data subscribers), private debt investments slowed down to €13.4 billion, thus half of the €26 billion of investments in 2021, the year in which there was a real boom in activity, versus the €13.1 billion of transactions in the whole of 2020.

BC Partners and Bain Capital refinanced the buyout of Fedrigoni with the issuance of two bonds worth a total of 1.025 billion euros (the issuer is Fedrigoni’s parent company Fiber Bidco spa) and a revolving credit facility of 150 million (see here a previous post by BeBeez). Earlier in July, BC Partners and Canson Capital acquired 50% of Fedrigoni from Bain Capital who kept a 50%. The company received from Moody’s a B2 long term rating with a stable outlook and the same rating for the senior secured issuance. Fitch Ratings gave a B+ rating with stable outlook and a BB- to the bond.

Kedrion, the company founded by the Marcucci family and officially passed under Permira‘s control last September, following the signing of the agreement last January, is preparing the placement of a new 865 million dollar high-yield bond (see here a previous post by BeBeez). Morgan Stanley is assisting the company.  The transaction follows the early redemption and delisting from the Dublin Stock Exchange of the 410 million euro bond paying a 3.375 percent coupon, which had been issued in May 2021 to refinance issues made earlier. Last April, the group had done the same with the 200 million euro  outstanding of the initially 350 million bond maturing last July.

Grimaldi Euromed, an Italian shipping company, received from Intesa Sanpaolo two green loans for a total of 70 million euros (see here a previous post by BeBeez). The company will invest such proceeds in purchasing the vessels Eco Mediterranea and Eco Adriatica. The company will pay a lower rate upon the achievement of ESG targets.

Coripet, a no-profit consortium of producers and recyclers of PET bottles, received a 22 million euros financing facility from Crédit Agricole Italia, Banca Monte dei Paschi di Siena and Unicredit (see here a previous post by BeBeez). SACE provided a warranty for 80% of the amount. Coripet will invest the proceeds in purchasing machinery for recycling. Coripet has sales of 113.8 million, an ebitda of 5.9 million and net cash of 4.1 million.

Telebit, an Italian IT company, issued a 6-years minibond of 15 million euros that Banca Finint placed and Iccrea Banca, Volksbank, e Mediocredito Trentino Alto-Adige, and Veneto Sviluppo subscribed (See here a previous post by BeBeez). Telebit will invest these proceeds in its organic development and the achievement of ESG targets. Telebit has sales of 150 million.

Ur-Invest, an equity club deal platform, acquired Emmequattro, an Italian industrial company, from the Mori family (see here a previous post by BeBeez). Merito sgr financed the transaction on behalf of Merito Private Debt Fund, an ESG vehicle which also acquired an equity stake. Marco Bertolina will be the company’s ceo while Anna Mori will be in charge of marketing and sales. Emmequattro has sales of 7.4 million, an ebitda of 1 million and net profits of 0.3 million

Solar Ventures,a developer fo photovoltaic plants that Michele Appendino heads, received from BPER a financing facility of 9.3 million euros (see here a previous post by BeBeez). The company will invest such proceeds in building a plant with a power of 7.8 MW and another of 1MW

Sirmax, a company operating in the production, recycling and sale of plastic and bioplastic, received from Unicredit a 7 million euros green loan that is part of the Futuro Sostenibile programme (See here a previous post by BeBeez). Sirmax will pay a lower rate upon the achievement of ESG targets.

3V Green Eagle, an Italian waste management company, issued a 5 million euros minibond maturing in 2028 (See here a previous post by BeBeez). Sace provided a warranty for the issuance that Mediocredito Trentino Alto-Adige and Confidi Systema! subscribed. The company will invest the proceeds in the construction of sustainable plants. 3V has sales of 14.2 million, an ebitda of 5.1 million and a net debt of 2.7 million.

Miri, an Italian producer of civil and industrial technological installations for the infrastructures and transport sectors, received a 1.5 million euros financing facility from Unicredit (see here a previous post by BeBeez). Sace provided the warranty for the loan that the company will invest in the growth of MCQ, its energy efficiency subsidiary. Miri has sales of 19.2 million, an ebitda of 2.6 million and a net debt of 2.1 million

After only one year of life, Cherry Bank, which was was born in October 2021 out of the merger of the credit servicer Cherry 106 spa with the Padua-based bank Banco delle Tre Venezie, can already count on a portfolio of acquired NPEs worth 3.7 billion euros GBV (see here a previous post by BeBeez).  Since its inception, Cherry Bank, which markets itself as a challenger bank, has finalized a total of 13 transactions in NPEs, the most significant of which is a portfolio of a nominal value of 1.9 billion euros, originating from the banking sector and acquired in the secondary market.

Mantova accepted the receivership application of Italian textile firm Corneliani that hired Spada Partners as financial advisor (See here a previous post by BeBeez). In 2021, the Italian Ministry of Economic Development acquired 49% of the firm from Investcorp. According to the receivership plan, Corneliani will pay in full the 19 million euros debt it made prior to the procedure and after it will pay its 50 million unsecured debt with a 8% – 11% (plus eventual earn outs) rate within three years.