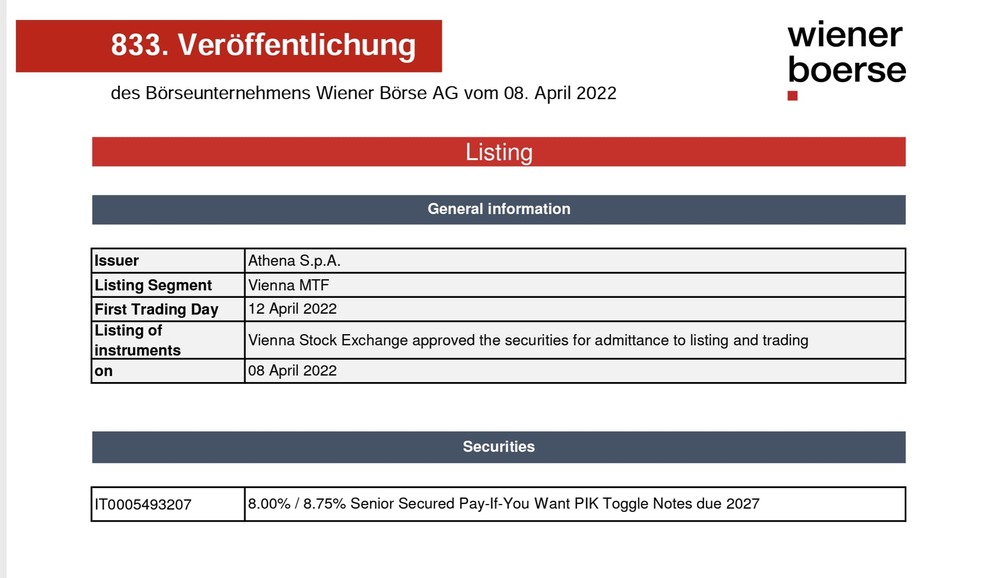 The pool of investors that earlier in February announce to have acquired 47.3% of Italian football club Atalanta from the Percassi Family financed the transaction with a bond of 152.5 million euros (see here a previous post by BeBeez). However, such an issuance will not be a liability on Atalanta’s books as Athena, said Stephen Pagliuca, the co-owner of US iconic basketball club Boston Celtics and co-chairman of Bain Capital. Bain Capital managing director Luca Bassi is Athena’s chairman. La Dea H, the holding that owns 84.66% of Atalanta, is the controlling shareholder of Athen. La Dea H belongs to the pool of investors that Pagliuca heads (55%) and the Percassi Family (45%). The PIK Toggle bond is listed on  Vienna Market (see here the listing prospectus), matures on 22 April 2027. The issuants can decide whether to pay the coupons in cash (8%) or with shares (8.75% coupon) (see here the notes of the board meeting of Athena, available for the subscribers to BeBeez News Premium and BeBeez Private Data). Further shareholders of Atalanta are Radici Partecipazioni (5.33%), Roberto Selini (5.33%), and to 160 minority shareholders. Press reports said that the Percassi Family tabled a bid for acquiring the stakes of Radici and Sellini. Pagliuca also received the support of Arctos Sports Partners for acquiring Atalanta on the ground of an enterprise value of 400 million.

Milan-listed Carel Industries, a provider of solutions for refrigeration and heating, placed two bonds of 20 million euros each maturing in 2032 that Pricoa Private Capital (part of Prudential Financial) subscribed (See here a previous post by BeBeez). The bonds have a 5-year preamortization period. Each of the bonds has the warrant of the group’s subsidiaries and is part of a private shelf agreement that gives Carel the possibility of requesting Pricoa, on an uncommitted basis and over the next three years (subject to any future renewals), to subscribe to additional bonds up to an aggregate maximum amount of 150 million US Dollars (or the equivalent in euros). The company will invest the bond’s proceeds in its organic development and M&A as well as in the implementation of a long-term financial structure that includes further uncommitted issuance with up to 15-year maturity. Carel recently acquired a further 30% of Arion, a joint venture that the company signed in 2015 with Bridgeport, for 1.2 million and now owns 70% of the asset that has sales of 2.7 million and an ebitda of 0.5 million. Carel’s controlling shareholders are the chairman Luigi Rossi Luciani and vice-chairman Luigi Natalini. The company has sales of 420.42 million (+26.8% yoy – 331.61 million in 2020), an ebitda of 85.3 million (65.2 million) and net financial debt of 57.8 million (49.6 million). In 2021, the company invested 35 million in acquisitions.

BCC Banca Iccrea (the parent company of Gruppo BCC Iccrea) carried on a securitization of a portfolio of 650 million euros gross NPLs with a GACS warranty (see here a previous post by BeBeez). Such NPLs were on the books of 68 banks part of Gruppo BCC Iccrea (64 BCC, Banca Sviluppo, BCC Banca Iccrea, BCC Banca Impresa, and Banca Medio Credito del Friuli Venezia Giulia), Banca Valsabbina, Banca di Credito Popolare, and Cassa di Risparmio di Asti. The spv BCC NPLs 2022 issued senior notes of 142 million that received a Baa1(sf) rating from Moody’s Italia and BBB(sf) from ARC Ratings and with a coupon of 6m Euribor + 0.5%. The spv issued mezzanine notes for 19.5 million with a coupon of 6m Euribor + 9.5%; and unrated junior notes for 6.5 million with a 6m Euribor + 10% coupon.

Milan-listed illimity bank acquired Arec (Aurora Recovery Capital), an Italian servicer of real estate distressed credits (see here a previous post by BeBeez) after the bank’s distressed credit unit invested in Q1 2022 122 million euros in non-performing exposures (+160% than 1Q21 and +40% of all investments in 2021). The bank aims to invest more in NPEs related to Public Procurement Claims (PPC) and Real Estate. At the end of March, illimity acquired and refinanced 1.8 billion gross of public works contract reserves litigation from Apollo Global Management which also signed a partnership with the bank for investing up to 500 million in single name real estate NPEs.

Affide (a brand of Custodia Valore – Credito su Pegno), part of Austrian credit on appraisal and pledge firm Dorotheum, signed with Banca Carige an agreement for acquiring the pawnbroking business of the bank and of Banca del Monte di Lucca (see here a previous post by BeBeez). Affide will pay 8.75 million euros at the closing.

Alia Servizi ambientali, an Italian circular economy utility company in which invested 58 municipalities in the areas of Florence, Prato and Pistoia, received a 135 million euros financing facility from UniCredit, Banco BPM, BCC Banca Iccrea, ChiantiBanca, and other minor lenders (see here a previous post by BeBeez). The company will invest these proceeds in its organic development. The company previously issued a 90 million Dublin-listed bond. Unicredit subscribed 50% of the liability with a 6-year maturity and a coupon of 6m Euribor + 260 basis points. Alberto Irace is the ceo of Alia Servizi Ambientali, which will invest the raised proceeds in its organic development, implementing ESG strategies and refinancing its liabilities. Alia has sales of 336.7 million (337.9 million in 2019), an ebitda of 29.7 million (23.9 million) and net financial debt of 50.9 million (20.3 million).

BGO Logistics Fund 1, a real estate fund of Kervis asset management sgr subscribed as sole investor by BentallGreenOak, received from ING Italia a five-year 28.5 million euros loan with a one-off bullet repayment of the principal (see here a previous post by BeBeez). Two rented Green Buildings logistics assets based in Turin and Varese area are the collatelar for such a facility. Marco Polenta and Giulio Bentivoglio founded Kervis in 2011. Polenta is a board member of Italian proptech Casavo as in February 2020 Kervis invested in the company’s 7 million round that Project A Ventures led

Cellino and Celmac, two subsidiaries of Italian industrial Group Cellino, received from Unicredit a 3 million euros loan with the warranty Garanzia Italia of SACE (see here a previous post by BeBeez). The loan is part of Unicredit’s Futuro Sostenibile programme for supporting the companies that aim to implement ESG strategies and access the resources of the EU recovery plan for the industrial digital and ecologic transformation. Gruppo Cellino will invest the raised proceeds in improving its energy efficiency and labour force safety. Ettore Cellino founded the company in 1950, and his grandson Fabrizio currently heads it. In 2020, Cellino acquired Steelcame, a JV that the firm signed with Arcelor Mittal. Cellino has sales of 77.1 million, an ebitda of 0.8 million and a net debt of 11.8 million.

Namedsport, a producer of food integrators, received a four-year one million green loan from Unicredit for which Mediocredito Centrale’s Fondo di Garanzia per le PMI provided a warranty (See here a previous post by BeBeez). The company will invest the proceeds in reducing the CO2 emissions for its production processes. This loan is part of Unicredit’s Futuro Sostenibile, a programme that the bank launched in July 2021 for supporting the Italian SMEs that aim to implement ESG strategies and get access to the resources of the National Recovery Fund for the digital and ecologic transition. Namedsport will pay a lower interest on this loan upon the achievement of ESG targets. The company belongs to the Canova Family who founded the business with Andrea Rosso in 2014 and later acquired all his stake.

Earlier in March, Davia, an Italian producer of canned tomato sauce, issued a minibond of up to 1 million euros and carried on a private placement on Fundera, a crowdfunding platform that belongs to Frigiolini & Partners Merchant(See here a previous post by BeBeez). This callable minibond will mature on 31 dicembre 2027, pays a gross yield of 4.5%, SACE’s Garanzia Italia provided a 90% warranty. This issuance is part of the programmes Master per emittenti seriali and Finance 4 Food. The Vitiello Family founded Davia in 2010. The company has sales of 19.6 million, an ebitda of 1.2 million and net financial debts of 7.7 million. Andrea Vitiello is the ceo of Davia.

Cooperativa Intersettoriale Montana di Sassoleone (CIMS), an Italian co-operative construction company, issued an up to 0.5 million euros minibond through Fundera, the crowdfunding portal of Frigiolini & Partners Merchant, as part o the programme Master per emittenti seriali (see here a previous post by BeBeez). The callable bond will mature on 31 March 2023, pays a gross yield of 4% and is also available to retail investors as SACE provided a 90% warranty with the programme Garanzia Italia. Antonio Dongellini and Giampiero Bassi are the chairman and the cfo of CIMS. CIMS has sales of 46.2 million, an ebitda of 1.7 million and a net financial debt of 10.5 million.