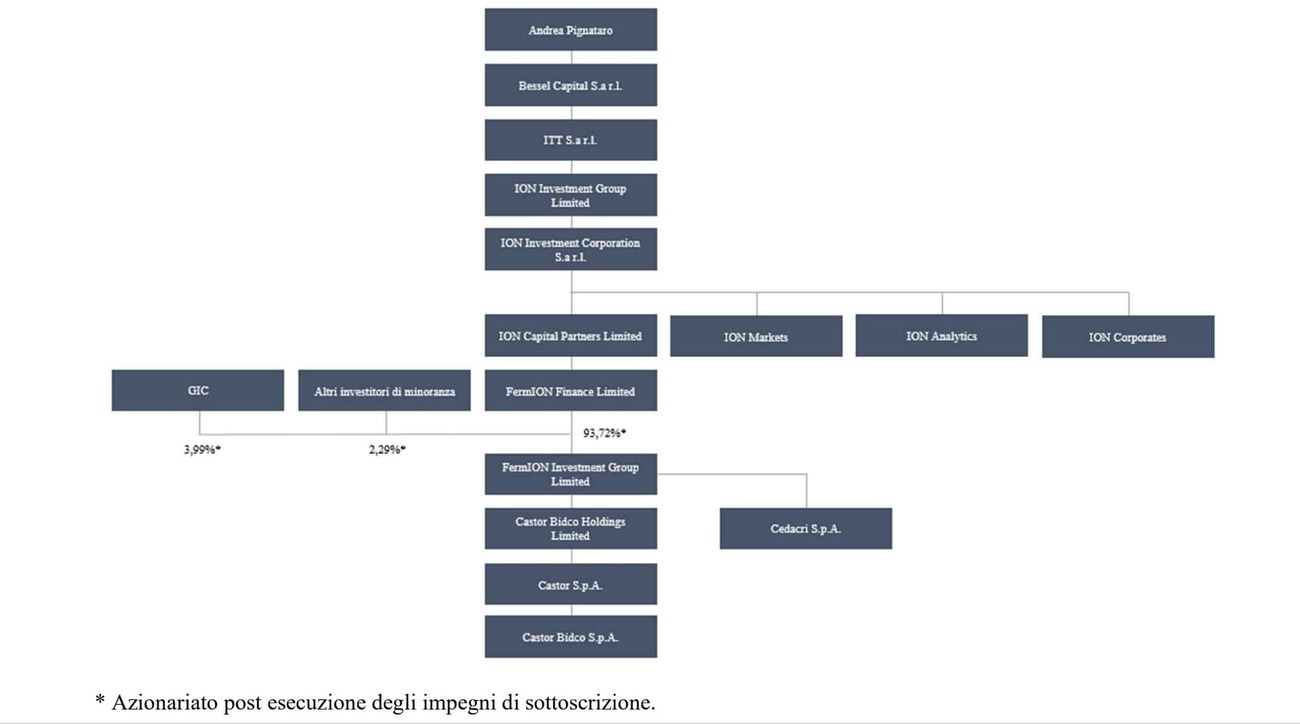 On 9 February, Wednesday, Cerved Group delisted from Milan market as ION Investments and GIC achieved their targets for the public offer they launched on the company through the spv Castor BIdco (see here a previous post by BeBeez). Castor spa, Castor Bidco’s parent company, will merge into Cerved and in the meantime it is also placing a two-tranches 1.4 billion euros bond for refinancing the debt for the acquisition of Cerved and the target’s current debt as well as the fees for the transaction. Both the tranches will mature in 2029. The company issued a senior secured fixed rate bond and a senior secured floating rate bond. On 8 February, Tuesday, FitchRatings assigned Castor a B corporate rating and a B+ rating to the bonds. Cerved’s enterprise value amounts to 2.5 billion. ION will pour 1.24 billion in equity. ION Analytics (fka Acuris and fka Mergermarket) recently called off the issuance of bond of 850 million US Dollars in light of market volatility.

Fabbrica Italiana Sintetici (FIS), a producer of active ingredients for the pharmaceutical sector, issued a Luxembourg-listed sustainability-linked senior bond of 350 million euros due to mature in August 2027 and a 5.625% coupon (see here a previous post by BeBeez). FIS also subscribed a revolving financing facility of 50 million. FIS belongs to the Ferrari Family and has sales of 498.6 million, an ebitda of 22.3 million and a net financial debt oof 264.2 million.

Muzinich Diversified Loans attracted a 100 million euros commitment from Cdp (Cassa Depositi e Prestiti) and a 50 millions committement from the EIF (European Investment Fund, a subsidiary of the European Investment Bank) (ee here a previous post by BeBeez). In June 2021, BeBeez reported that Muzinich was working on the launch of the fund. EIF’s resources have the warranty of the European Warranty Fund, a 540 billion programme of the European Union for supporting the economic recovery from the Covid-19 turmoil. MDL will provide parallel lending facilities and aims to raise 1 billion while allocating 200 million for the Italian market. Domenico Del Borrello is Italy’s country head for Muzinich. The professionals that are part of the firm’s rescue financing/Capital Solutions are Marcello Villa (co-head Capital Solutions), Carlo Bosco (co-head Capital Solutions), Attilio Guida,Gianpaolo Pellegrini (chief investment officer), Gianluca Oricchio (ceo), and Massimo Di Carlo.

Banca Popolare Pugliese poured 10 million euros in Anthilia BIT, a private debt fund of Anthilia Capital Partners (see here a previous post by BeBeez). Anthilia BIT raised 201 million ahead of a 250 million target by the end of the year. The fund previously attracted 70 millions from the European Investment Fund and 40 million from Enpam.

Dutch real estate group The Student Hotel received an ESG loan of 145 million euros from Unicredit, while Sace provided a 54 millions warranty for the facility upon the achievement of the rating BREEAM Very Good for the Students Houses San Lorenzo in Rome and Belfiore in Florence (See here a previous post by BeBeez). TSH will invest the proceeds in the development of 10 student halls in Europe by 2025.

LBO France launched the project VITA Superbonus, a platform for buying the minibonds that Italian SMEs issue for financing the refurbishments to increase the energy efficiency of their buildings (see here a previous post by BeBeez). The fund subscribed 20 green minibonds worth a total of 100 million euros. IMI-Intesa Sanpaolo acquired the senior tranches, Azimut, P&G sgr (SCO and Trinity Funds) and Glemmont, with its Green Credit Strategy REBS1 (Renewable Energy Backed Securities) acquired the junior notes. Phinance and LBO France received the tranches for the originators.

Clabo, a Milan-listed company active in the field of professional display cases for the Horeca sector, rescheduled the repayments of its existing debt and the provision of fresh resources with a pool of banks and direct lending funds (see here a previous post by BeBeez). The company has a market capitalization of 25 million euros and attracted the resources of Anthilia Capital Partners, Finanziaria Internazionale Investments, Hedge Invest, Banca Popolare di Bari, Banca Monte dei Paschi di Siena, BPER Banca, Intesa Sanpaolo, and UniCredit. Clabo rescheduled its medium/long-term liabilities for a total of EUR 20.7 million with an extension of the repayment plan from 3 to 4.5 years and unchanged rates; confirmation of short-term credit lines of EUR 5.6 million; credit lines of 1.5 million for which Sace provided a warranty and financing facilities that the company’s shareholders provided for 0.4 million ahead of a conversion in equity. Clabo is also going to issue a minibond of 5 million with a 6.5% coupon and maturity on 31 December 2029 that Riello’s Fondo Impresa Italia II Private Debt will subscribe. Clabo has sales in the region of 47 million.

Milan Court accepted the receivership application of Ugo Mursia Editore, an Italian publisher that Ugo Mursia and his wife Giancarla Re founded in 1955 and that their daughter Fiorenza Mursia is currently heading (See here a previous post by BeBeez). The company has sales of 0.796 million euros, an ebitda of minus 69,000 euros and a net financial debt of 1.33 millioni. The company needs 2.63 million for its creditors and may fetch 1.2 million out of the sale of reale estate assets.