bybebeez
in Bad loans and other NPLs, Crisis & Relaunch, M&A and corporate finance, Private Debt
A A
Share on FacebookShare on Twitter 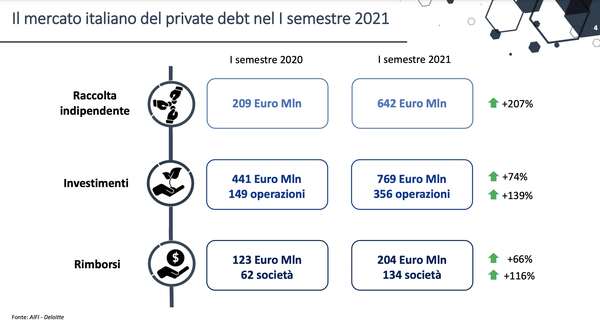 Unicredit and the Italian government sponsored agency SACE launched the Bond Food Mezzogiorno, the first minibond issuance program aiming at finance Southern Italian SMEs’ medium-long term development plans linked to the sustainable and international growth in the agri-food sector (see here a previous article by BeBeez). The eight pioneering companies, which have already issued green bonds for a total of 27 million euros, are: the Moak coffee roaster that issued a 1.5 million euros minibond (see here a previous post by BeBeez); the Cantine Ermes winery, the Caseificio Palazzo (see here a previous article by BeBeez), the producer of tomato sauces Gustibus Alimentari and the pasta factory De Martino. To these are added three companies of the Sicilian Leone group, which carries out diversified activities, namely Mangimi Leone, Almeda and Leone Group. According to BeBeez, the program does not have a pre-established ceiling.

Dott. Gallina, a producer of components for the construction and automotive sectors, issued a 14 million euros sustainability-linked minibond due to mature in 7 years that Unicredit subscribed (see here a previous post by BeBeez). The interest rate that the company will pay will depend on the achievement of ESG targets. DG has sales of 52.8 million, an ebitda of 4.8 million and a net financial debt of 14.2 million. Unicredit said that this is the minibond number 100 of which the bank is a subscribers and also said that between January and August 2021 the bank subscribed 37% of the issuances in Italy. The bank quoted as source BeBeez Private Data, the Database that BeBeez developed with FSI for monitoring also the issuances of minibonds (find out how to subscribe for only 110 euros a month) (see here the latest di BeBeez Private Debt Report, available for the subscribers to BeBeez News Premium and to BeBeez Private Data).

Luigi Luzzatti, an Italian association of co-operative banks and Gruppo Prelios launched a vehicle for investing in UTPs (see here a previous post by BeBeez). The fund aims to raise 250 million euros in UTPs of the banks that are part of Luzzatti.

Moby, the troubled Italian shipping company that belongs to the Onorato family, hired US law firm Quinn Emanuel Urquhart & Sullivan for taking Morgan Stanley and two of its distressed credit traders Massimo Piazzi and Hillel Drazin, as well as Antonello Di Meo, a former trader of Sound Point Capital Management, before the US District Court of New York Southern District (case 21-cv-8031) (see here a previous post by BeBeez). Moby said it could provide the Court with evidence of insider trading aimed at taking the control of the company to the detriment of other creditors. Moby recently signed a debt restructuring agreement with one third of the bondholders that invested in the 300 million euros worth Luxembourg-listed issuance with a 7.75% coupon due to mature in 2023. Moby’s debt amounts to 780 million.

Generalfinance, an Italian provider of factoring finance to companies in special situation, placed a Tier2 bond of 5 million euros with a 10% annual coupon due to mature in 6 years (See here a previous post by BeBeez).  The company may exercise a call option from the fifth year. An undisclosed institutional investor subscribed the bond that will allow Generalfinance Total Capital Ratio to be of 13.6% from 11.1%.

Intesa SanPaolo sold a porfolio of NPLs of 2.6 billion euros to MBCredit Solutions, part of Mediobanca (see here a previous post by BeBeez). The portfolio includes unsecured credits with retail and SMEs corporate clients. MBCredit has now assets under management worth 11 billion euros.

Zenith Service, part of Arrow Global since 2016, and GMA carried on a securitization with distressed real estate items as underlaying assets (see here a previous post by BeBeez). The spv will acquire the assets and the asset-backed (abs) notes it issued. Insitutional and qualified investors will subscribe the senior and junior tranche. Sign up here for BeBeez Newsletter about Private Debt and receive all the last 24 hours updates for the sector.

From 5 to 7 October took place the Global NPL Conference of Smith Novak for which BeBeez acted as media partner. Edouard Fernandez-Bollo, part of the Supervisory Board of the European Central Bank, held a keynote speech. Further information available here.

Generali Real Estate received a green facility of 162.5 million euros for the development of Torre Libeskind, a Milan-based project of the Rubens fund that will host the offices of PwC (See here a previous post by BeBeez). Crédit Agricole CIB, BNP Paribas Italia, Intesa Sanpaolo, and Unicredit provided the facility. Earlier in June, Enpaia, the pension fund of agricolture workers and Generali coinvested 160 million for a 50% of Rubens.

Manifattura Tabacchi (MT), an Italian real estate company, received a sustainability-linked financing facility of 92.3 million euros with a tenure of 5 years from Intesa Sanpaolo, Banco BPM, and MPS Capital Services (See here a previous post by BeBeez). MT is a joint venture that Cdp Immobiliare (40%) and PW Real Estate (60%) signed in 2016 and that UK Aermont Capital is managing. The company will invest the proceeds in the construction of eco-friendly buildings

Tikehau Capital issued a green loan for financing Swiss Gyrus Capital’s acquisition of the health care and government activities of PwC Italia (see here a previous post by BeBeez). Gyrus rebranded the acquired asset as Intellera Consulting and appointed Giancarlo Senatore as its ceo. Sign up here for BeBeez Newsletter about Private Debt and receive all the last 24 hours updates for the sector.

Milan-listed Antares Vision, carried on a private placement of a 40 million euros bond due to mature in 12 years (See here a previous post by BeBeez). The unrated bond has a preamortising period of 8 years and pays a fixed rate of 2.86%. Pricoa Capital Group, part of US insurer Prudential Financial, subscribed the issuance. Antares also started to subscribe loans with an average tenure of 8 years, a median duration of 5 years and a median post-hedging cost of 1.7%. The company will refinance its banking debts for a total of 131 million. Emidio Zorzella, the chairman and ceo of Antares, said that after such transactions, the company has fresh resources of 100 million. Antares turnover amounts to 128.3 million, an adjusted ebitda of 29,3 million, adjusted net profits of 20.1 million and net cash of 29.2 million. Sign up here for BeBeez Newsletter about Private Debt and receive all the last 24 hours updates for the sector.