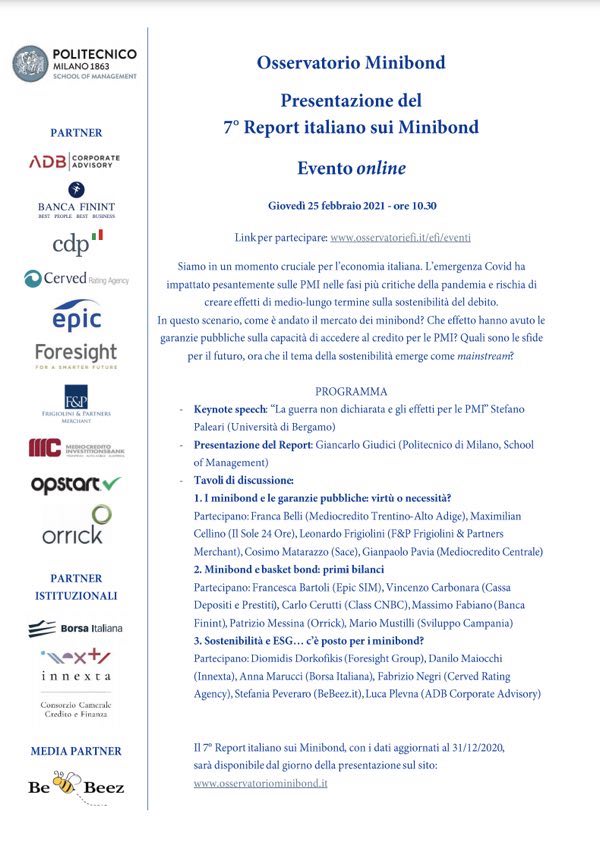 BeBeez is the media partner for the presentation of the Report about Italian Minibonds of Milan Polytechnic University (see here a previous post by BeBeez). The event will tak place on 25 February, Thursday, at 10:30 AM. Click here for joining. Stefania Peveraro, the Chief Editor of BeBeez, will moderate a roundtable about ESG and minibonds. BeBeez just launched GreenBeez, a service about ESG and private capital investments .

Amissima Vita, an insurer that belongs to private equity Apollo Global Management, issued a Dublin-listed convertible bond of 80 million euros callable on 16 February 2026 and 16 August 2026, due to mature on 16 August 2031 and initially paying a 7% coupon (See here a previous post by BeBeez). After the call period the coupon will amount to the swap rate of equal maturity at that moment and a spread. Amissima will invest the proceeds of this tier 2 instrument for strenghtening further its equity and for repaying an outstanding sunordinated debt instrument .

In 2020, the Supply Chain Fund of Groupama AM issued invoice financing for 464 million euros and processed 14.160 requests through the fintech platform Fifty (See here a previous post by BeBeez). Since 2016, Supply Chain Fund issued facilities for 1.45 billion for factoring, confirming and reverse factoring (53% of the portfolio) transactions. Alberico Potenza is the coo of Groupama am. Sign up here for BeBeez Newsletter about Private Debt and receive all the last 24 hours updates for the sector.

Finhold, the holding of the Salciccia Family, received a 30 million euros financing facility from Banco Bpm (see here a previous post by BeBeez). Finhold will invest such resources for exercising the warrants of its subsidiary Salcef Group, a railway system and technology that listed on Milan market in November 2019 after the business combination with the Spac Industrial Stars of Italy 3. On 15 February, Monday, Finhold, the majority shareholder of Salcef, exercised 2.83 million of its Salcef warrants that will allow to subscribe the same amount of shares at a price of 10.5 euros each and for a total of 29.75 million. Finhold will raise its stake in Salcef from 71.95% to 73.66%. Valeriano Salciccia is the company’s ceo.

BCS, part of Escogit Capital, refinanced its outstanding debt and the revamping of 6 photovoltaic plants with a 2.67 MW power located on the roofs of Civitavecchia Freight Village (See here a previous post by BeBeez). BPER and other banks provided the facility.

Rome Court is assessing the bankruptcy for Varia Aedifica, a subsidiary of Italian construction company Parnasi (see here a previous post by BeBeez). An eventual bankruptcy sentence could lead to a domino effect and involve Parsitalia and Eurnova, which owns the area where Italian footbal team AS Roma aims to build its stadium. Furthermore CPI Property Group (CPIPG), a Luxembourg-based company that belongs to Radovan Vítek, the owner of Milan-listed Nova RE Siiq, may withdraw from acquiring the real estate assets of Parnasi. By the end of February, CPIPG scheduled the closing for acquiring the area for the stadium as in October 2020 Unicredit agreed to sell Parnasi’s subsidiaries Capital Dev, Parsitalia and Eurnova to Vitek for about 250 million euros. The stadium area belongs to Eurnova and is worth in the region of 50 million, while Capital Dev owns Maximo, a shopping mall.

Italian-French credit management firm iQera Group (fka MCS-DSO), raised to 98.24% its stake in Serfin97, a servicer for Utps and Npls  (See here a previous post by BeBeez). The target’s founder Stefano Massa resigned from his ceo role for becoming a senior advisor of iQera and sold his 20% stake. iQera acquired 80% of Serfin97 in December 2018. iQera has a turnover of 271 million euros.

The boards of directors of the Italian servicer Cherry106 and Banco delle Tre Venezie gave their approval for the merger of the companies (See here a previous post by BeBeez). In August 2020, BeBeez said that the shareholders of Cherry 106 and the ceo Giovanni Bossi would have taken 51% of Banco delle Tre Venezie. Bossi will be the new company’s ceo. Banca d’Italia and ECB must give their approval for the merger.