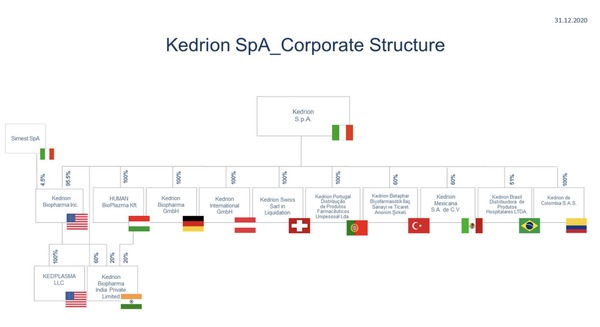 Italian biotech Kedrion, a company that belongs to the Marcucci Family, Cdp Equity and FSI, issued a Dublin-listed senior secured bond of 410 million euros with a 3.375% coupon due to mature on 15 May 2026  (see here a previous post by BeBeez). The company will invest such proceeds in refinancing its debt and buy back its 150 million bond issued in 2017 with a 3% coupon on which Kedrion launched a public offer of 103 euros on 23 April, Friday. Kedrion also signed for two credit lines of 140 million due to mature in 2026 and two revolving facilities of 100 million.

Italian Wine Brands (IWB), a Milan-listed wine producer, closed before the scheduled deadline of 30 May the placement of a senior unsecured bond worth 130 million euros with the warranty of Sace (see here a previous post by BeBeez). Cdp and Sace, subscribed 25 million of the issuance. The bond pays a gross annual coupon of 2.5% and is due to mature on 13 May 2027. The bond will list on Irish Stock Exchange. IWB has sales of 204.3 million, an ebitda of 25.6 million and net cash of 1.4 million. IWB, based in Milan, is the holding company created to bring Giordano Vini and Provinco Italia under a single holding, simultaneously equipping it with new finance raised through the issue of convertible bonds by Ipo Challenger. The latter was a pre booking company or an evolved SPAC formula that raises funds through the issue of bonds convertible into shares of the company which will then be chosen as the target. The latter will then be brought to the Stock Exchange with a normal ipo (see a previous article by BeBeez). Ipo Challenger was promoted by Electa Ventures in May 2014  while IWB landed on the Stock Exchange in January 2015.

Italy’s IT company Trefin issued two minibonds for a total of 4 million euros (see here a previous post by BeBeez). Unicredit subscribed a minibond of 2.5 million and another of 1.5 million that Trefin’s subsidiaries Aerosoft and 3F & EDIN issued. Both the issuance will mature in six years and pay a coupon of 1.55%. The company will invest such proceeds in R&D and the refinancing a Milan-listed 4 million bond issued in 2016 with a 5.5% coupon that Finint subscribed. Trefin belongs to the Floro Flores Family and has sales of 22 million with an ebitda of 3 million and net cash of 2.9 million. Francesco Floro Flores is the company’s chairman.

In 2020, the Italian fintech marketplace for SMEs financing BorsadelCredito.it, a company of P101, Azimut and GC Holding, posted  net profits of 0.613 million euros and net profits in the region of 0.5 million (See here a previous post by BeBeez). The company’s turnover is over 4 millions.

Banca Progetto (fka Banca Lecchese), the Italian challenger bank that belongs to Oaktree Capital Management since 2015, closed a securitization of consumer credits worth 369.6 million euros (see here a previous post by BeBeez). Banca Progetto originated the credits. Finint manages the spv Progetto Quinto srl which issued senior and junior notes due to mature in October 2036. The Milan-listed senior tranche amounts to 316.5 million with a coupon of 1 mont Euribor + 60 bps and a rating of Aa3 (sf) / AA (low) (sf) from Moody’s Investor Service and DBRS. Banca Progetto subscribed the junior tranche of 53.1 million.

Banca Finint, an investment bank focused on corporate finance, private debt and securitizations ,aims to expand its activity to the wealth management sector (see here a previous post by BeBeez). The bank aims to boost the growth of its corporate and investment banking units through the structuring of securitizations with the support of its asset management activity. The wealth management and private banking could help further to implement such a strategy.  That’s why the bank delivered a binding offer to buy private bank Banca Consulia last April (see here a previous article by BeBeez).

The Italian Ministry of the Economic Development (MISE) authorized the debt restructuring plan of CIN (Compagnia Italiana di Navigazione) that since 2015 belongs to Moby (see here a previous post by BeBeez). However the green light of the MISE was given to the agreement in the version that was submitted to the Supervisory Committee by the extraordinary Commissioners of Tirrenia, the bad company created in 2012 to carry out the privatization of the state shipping company, which is exposed to the Moby group for 180 million euros. And the point is that CIN does not agree with the version of the agreement on which the MISE gave its ok and therefore CIN rejected it. Meanwhile, the Court of Milan granted a postponement to May 24th of the hearing to decide on the bankruptcy petition for CIN filed last April by the Milan Public Prosecutor, through the prosecutor Roberto Fontana.

On 10 May, Monday, Italy’s IT company Olidata applied for receivership (see here a previous post by BeBeez). The company aims to carry on a restructuring as it did not complete a capital increase launched in 2020. Olidata reportedly tried to find new investors. Carlo Rossi and Adolfo Savini founded Olidata in 1982. The company has sales of 3.5 million euros and an ebitda of minus 0.757 million with a net debt of 1.6 million.