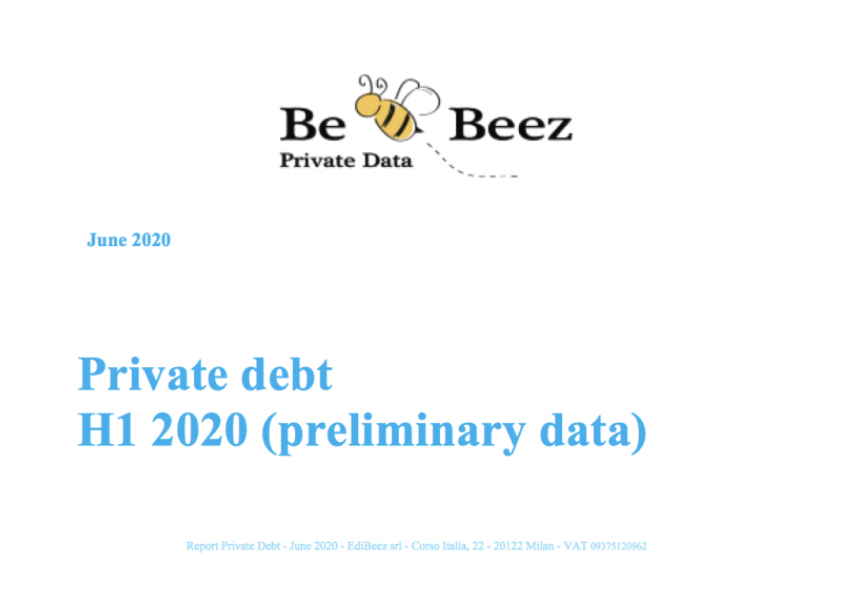 The minibond market improved its performance during the coronavirus emergency (see here a previous post by BeBeez). The Minibond observatory of Milan Polytechnic University’s School of Management released such a statement during a webinar for which BeBeez acted as media partner. Italian companies issued 86 minibonds between January and June 2020 for a total value of 270.55 million euros, while the 50 issuances of 1H19 were worth 220.8 million. As for today BeBeez Private Data mapped 44 bond issues under the 50 million euros size for a total of over 264 million euros. The details of the issues are contained in BeBeez’s H1 2020 preliminary Private Debt Report, which is available for BeBeez News Premium subscribers.

Cassa Depositi e Prestiti will be increasingly involved in the development of the Italian private debt market, considered in a broad sense and therefore including direct lending and fintech lending platforms. Andrea Nuzzi, head of corporate and financial institutions of Cdp, explained it clearly on the occasion of his speech at the webinar organized by the Minibond Observatory of the School of Management of the Politecnico di Milano on the evolution of the private debt market in Italy, of which BeBeez was media partner (see here a previous post by BeBeez). Cdp is quite active as anchor investor inn bbasket bonds of minibonds, ie bond under a 50 million euros size issued by not-listed SMEs.

The first eight minibonds forming collateral for Apulia Region’s basket bond were issued for a total amount of 33.4 million euros (see here a previous post by BeBeez). Puglia Sviluppo will provide a guarantee for 25% of each issuance for a total of 40 million. The basket bond programme started in June 2019 with an initial fundraising target of 100 million that increased to 160 million. Th basket bond is a securitization of minibonds with a 2-10 million euros size and a 7 years maximum maturity  Unicredit will subscribe the minibonds, securitise them and sell the asset backed securities to institutional investors. Unicrdit will subscribe 5% of the notes, while Cassa Depositi e Prestiti and Mediocredito Centrale will subscribe the rest in similar stakes together with three local banks. The first eight issuers are lfrus, Alidaunia, CDSHotels, Cirillo Group, Links Management&Technology, Tersan Puglia, The Digital Box, and Upgrading Services.

Frigiolini & Partners Merchant and Fundera, its equity crowdfunding subsidiary, signed a partnership with corporate lending platform October for the implementation of alternative finance projects for SMEs (See here a previous post by BeBeez). October may issue pre-financing facilities to F&P clients. October’s clients will have the possibility to issue short-term minibonds. Both the companies will help borrowers and issuants to get access to the Italian Government’s warranty fund. Sign up here for BeBeez Newsletter about Private Debt and receive all the last 24 hours updates for the sector. BeBeez welcomes you after the lockdown period with an unmissable offer: subscription to BeBeez News Premium and BeBeez Private Data for only 550 euros plus VAT from 1 June to 31 December 2020 Click here for more info

Alternative Capital Partners sgr, an ESG alternative asset manager, said that the European Investment Bank (EIB) committed to invest up to 40 million euros in the Sustainable Securities Fund (See here a previous post by BeBeez). The European Fund for the strategic Investments (EFSI) supported the EIB together with banks and pension funds and provided for the first time a warranty on an Italian private debt fund with an ESG focus. ACP set a fundraising target of 200 million euros, as BeBeez previously reported in November and will invest in energy efficiecy, renewable energy, sustainable mobility and green economy. Evarist Granata is the ceo of ACP which will use the Fintech Alternative Investment Platform – Faip for screening, appraising and monitoring its investments. Emanuele Ottina and Granata own 60% of ACP, while the remaining stake belongs to entrepeneurial families Cardano, Di Vincenzo, Ielo, Ginena, Griffo, Cabassi, and Ferragamo. In September 2019, ACP launched Infrastructure Real Estate Recovery Fund, an investor in real estate with an ESG approach.

Groupama Asset Management sgr’s direct lending vehicle Supply Chain Fund (SCF) had been acquiring more than one billion euros of trade receivables from italian SMEs since starting its activity in September 2016 (see here a previous post by BeBeez). Alberico Potenza, managing director of Groupama am sgr, released such data during a Caffé di BeBeez in aroma web about Private capital and insurance. SCF received committments of 60 million (20 million from Cattolica Assicurazioni, Gruppo Talanx’ HDI Assicurazioni, ITAS Mutua, and Previbank, and 40 million from Groupama). SCF supports the working capital of companies and their suppliers with the invoice financing of the fintech platform Fifty Finance, a business that Michele Ronchi founded and in which Groupama am invested together with Tesi Square.

Banco Desio signed a partnership with Credimi for investing 50 million euros in SMEs financing and invoice financing (See here a previous post by BeBeez). The bank will invest resources in subscribing securitization notes of Credimi that will support companies in recovering from the lockdown that will be able to apply with the Italian Government warranty fund for 90% of the finuancing worth 25% of 2019 revenues. The facilities have a 5-years tenure with a one-year pre-amortising period and the repayment period starting in September 2021. Companies with less than 500 workers and sales of above 0.1 million can apply.

Venchi, the Italian chocolate brand, joined the Supply Chain Programme (SCP) of Intesa Sanpaolo (see here a previous post by BeBeez). Venchi’s distributors will gain a better access to the credit market in light of their client’s rating. Venchi belongs to Daniele Ferrero (27%), Nicolò Cangioli (24%), Giovanni Battista Mantelli (12%), Pietro Boroli (12%), Marcello Comoli (12%), and Luca Baffigo Filangieri (12%). The company has sales in the region of 90 million euros (33% exported) and an ebitda in the region of 20 million.

On 24 June, Wednesday, Davis & Morgan, a Milan-based investor in Npls, will list on Milan market a minibond of 20 million euros su ExtraMot Pro (See here a previous post by BeBeez). The bullet bond pays quarterly a fixed annual rate coupon of 8% for the  first two years and 10% until the maturity and matures on 24 June 2027. The collateral of this obligation is a portfolio or real estate assets based in Rome and Milan. D&M will invest the proceeds of such an issuance in acquiring single name non performing real estate credits.

Raffaele Cappiello, the extraordinary commisioner for managing the troubled Italian fashion company Stefanel, started a sale procedure for the company’s brand (see here a previous post by BeBeez). The deadline for tabling expression of interest is 1 July, Wednesday. Stefanel is in receivership since 12 September 2019 . In November 2019, the company’s net financial debt amounted to 94.2 million euros.

IdeA Ccr concluded the recapitalization of Pieralisi Maip, a producer of machinery for the edible oil industry, and acquired 51% of the business (see here a previous post by BeBeez). The Pieralisi Family will hold 49% (Gennaro, Paola and Andrea Pieralisi will hold even parts of this stake) of the company which has sales of 100 million euros with an ebitda of 10 million. Alessandro Leopardi will keep his ceo role.

At the closure of trading of 18 June, Thrusday, Astaldi’s market capitalization went up 11.22% or 0,555 euros per share in light of the better than expected results of the troubled contractor (see here a previous post by BeBeez). The next EGM will take place on 31 July, Friday. Astaldi’s turnover is of 1.5 billion euros (+50% yoy), the adjusted ebit is of 40 million. The company’s equity is of minus 1.5 billion (-1.4 billion in 2018).

Italian fashion brand Corneliani, of which Investcorp owns 51%, applied for receivership with Mantova Court (see here a previous post by BeBeez). The company faced troubles related with the coronavirus emergency while issues arised between the Corneliani Family and Investcorp. Investcorp, acquired its stake in Corneliani in June 2016 on the ground of an enterprise value of about 100 million US Dollars. In 2018, the company posted sales of 108 million euros (110 million in 2017), an ebitda of minus 5.7 million (– 1.1 million) and a net loss of 12.1 million (2.6 million).

T. One (fka Valtur), the Italian tour operator in receivership, aims to sell two resorts based in Favignana and Capo Rizzuto and a soil based in Sicily where the company aimed to build a holiday village (See here a previous post by BeBeez). Trapani Court appointed Prelios Agency and EY for selling the assets. T. One has debt of 70 million euros (mostly with suppliers), revenues of 85 million and a net loss of 80 million. Nicolaus, a group that belongs to Giuseppe and Roberto Pagliara, acquired the Valtur brand in July 2018 for 3 million and outbeaten the bids of Bluserena and Alpitour.

Banco di Sardegna and Cassa di Risparmio di Bra, two subsidiaries of Bper (Banca Popolare dell’Emilia Romagna) carried on the securitization of Spring, a 1.2 billion euros non-performing loans portfolio (See here a previous post by BeBeez). At the end of 3Q19, the credits’ value was of 1.4 billion (57% secured and 43% unsecured).Spring spv issued three 3 classes of shares for a total of 343.4 million. The senior tranche (26.2% of the face value) is of 320 million and received a rating of Baa1 from Moody’s and of BBB from Scope Ratings. The mezzanine tranche amounts to 20 million and the junior tranche is of 3.4 million. The senior shares pay a coupon of 6m Euribor + 50 bps. The senior tranche will have the Gacs warranty.

Banca Popolare di Sondrio carried on the securitization of a portfolio of distressed credits amounting to one billion euros (999.7 million) and will require the Gacs warranty for the senior tranche (see here a previous post by BeBeez). The bank sold the portfolio to Diana spv, which issued three tranches of notes for 274 million (27.4% of the face value) that Banca Popolare di Sondrio subscribed. The senior tranche (235 million, 23.5% of the total face value) received a rating of BBB/Baa2/BBB from DBRS Morningstar, Moody’s, and Scope Ratings. The mezzanine tranche amounts to 35 million (3.5% of the face value of the credits), while the junior tranche is of 4 million. The bank will apply for the Gacs warranty on the senior tranche.

Italian servicer doValue and German fintech Debitos launched doLook, a marketplace for distressed credits and real estate assets (See here a previous post by BeBeez). This partnership will allow doValue to simplify the transactions on the secondary market of credits. doValue is listed on Milan market and after the acquisition of Altamira Asset Management generated a turnover of 364 million, with a 39% ebitda margin. In April 2019, Bain Capital Credit acquired 10% of doValue.

Morgan Stanley to sell Ital Gas Storage next Autumn. Infrastructure funds are in the race as well as Milan-listed Snam energy company