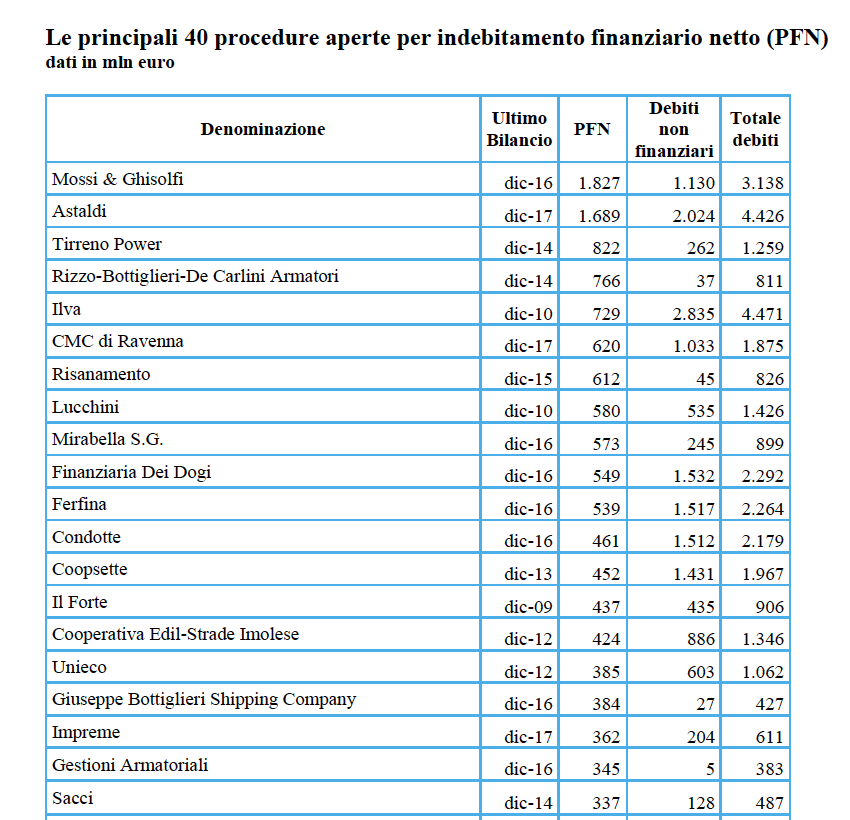 At the end of August 2020, more than 12,300 Italian companies are going through a procedure of insolvency, receivership or debt restructuring said a report that Leanus produced for BeBeez (see here a previous post by BeBeez). According to BeBeez Private Data (find out here how to subscribe for just 110 euros per month), 75 Italian companies are going through an insolvency procedure or a special situation with the support of turnaround investors. The Insight View of BeBeez of 23 November, Monday, provides a focus on special situations. Yesterday Stefania Peveraro, the Chief Editor of BeBeez and chairwoman of EdiBeez srl, and Alessandro Fischetti, the ceo of Leanus hosted a webinar about the receivership procedures for 2019/2020  and shared the results of the above report (see here a previous post by BeBeez). See here BeBeez Insight View about special situations, available to BeBeez News Premium’s subscribers.

Between July 2019 and June 2020, Italian SMEs raised 2.67 billion euros (2.56 billion yoy) through fintech platforms, minibonds, direct lending transactions, equity and reward crowdfunding, ICOs, private equity, and venture capital funds, said a report about alternative finance of the Observatory on Entrepreneurship Finance  and Innovation of the School of Management of Milan Polytechnic University that also used the researches of BeBeez Private Data (see here a previous post by BeBeez). Giancarlo Giudici shared such results during the Alt-Finance Day, a live – streaming event of Innexta, Unioncamere Nazionale and the Chambers of commerce of Milan, of Monza Brianza and of Lodi. The issuances through basket bond programmes and the bond placements through equity crowdfunding portals are increasing. These are trends that are going on in 2020 too. See here the Caffé di BeBeez about basket bonds and the BeBeez Report about basket bonds published last July (available to BeBeez News Premium’s subscribers).  According to CrowdfundingBuzz the equity crowdfunding platforms in Italy raised 65.9 million euros since January. BeBeez data say that at the end of August, startups based in Italy or founded by Italians raised 466 million since January (605.6 million in 2019)  (see here the Venture Capital Report Report of BeBeez for September available for the subscribers to BeBeez News Premium).

A further 1,700 Italian companies could raise resources through the private debt channels for 11 billion euros (1,151 of these could issue green bonds worth 7.2 billion), said  a report of Cerved Rating Agency (see here a previous post by BeBeez). Since January 2020, Italian unlisted companies issued bonds for 3.5 billion, according to BeBeez Private Data, see here how to subscribe). The Minibond Observatory of Milan Polytechnic University said that 2019 issuances amounted to 5.5 billion.

Kairos Partners appointed Electa Italia for building the portfolio of Renaissance Eltif (Kairos Alternative Investment Sicav Renaissance Eltif) (see here a previous post by BeBeez). The core portion of the Eltif will focus on listed and unlisted SMES with a market capitalization below 500 million euros. Massimo Trabattoni and Rocco Bove will be the fund’s managers. The fund will invest up to 25% of its resources in warrants, convertible bonds, club deal, pre-ipo, and private equity deals. The fund will last 6 – 8 years.

Eur, a fund of Gwm Asset Management, received from  Generali Real Estate, Natixis and SocGen a financing facility of 157.3 million euros (See here a previous post by BeBeez). Gwm is a wealth manager and a multifamily office born in 2000 that has a focus on alternative investments and has assets under management for 4.2 billion.

Eurosanità, an Italian healthcare company, received a financing facility of 24 million euros from BPER Banca (see here a previous post by BeBeez). Sace provided a warranty through the programme Garanzia Italia. The company will invest such proceeds in its working capital.

JRS Silvateam Ingredients received a financing facility of 10 million euros out of the  6 billion resources that Gruppo Intesa Sanpaolo allocated for the circular economy (see here a previous post by BeBeez). Companies based in the North West of Italy already borrowed 15 million. Massimiliano Bonzo and Alessandro Battaglia are the ceo and chairman of JRS.

Clessidra will invest in the factoring distressed sector (see here a previous post by BeBeez). The firmi s acquiring Compagnia Europea Factoring Industriale (Coefi) through the subscription of a capital increase of 3 – 6 million euros by June 2021. BeBeez previously reported that Coefi would have created synergies for Clessidra Restructuring Fund. By 2024, Clessidra aims to increase Coefi’s turnover to 750 million with a brokerage margin of 20 million and a net profit of 7 – 10 million. Sign up here for BeBeez Newsletter about Private Debt and receive all the last 24 hours updates for the sector.

Bain Capital Credit launched Natissa an investor in NPLs (see here a previous post by BeBeez). Mario Francesco Anaclerio and Silvia Maria Rovere are part of the company’s board. Alfredo Balzotti will be the ceo. Sign up here for BeBeez Newsletter about Private Debt and receive all the last 24 hours updates for the sector.