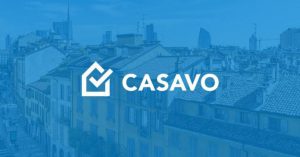 Proptech Italian startup Casavo closed a debt financing round worth 25 million euros. Specifically, the startup has signed a revolving loan agreement secured by real guarantees with an important international fund with a focus on the technology sector. The transaction was concluded thanks to the support of the advisors Rödl & Partner and Chiomenti law firms (see the press release here).
This is the second round of the year for the startup and the fourth since its foundation in 2017. Casavo had closed a series A round in shares last February of about 7 million euros driven by Project A Ventures (see here a previous post by BeBeez). Investors who had already supported Casavo, such as Picus Capital, based in Munich, and the Italian-French 360 Capital Partners fund, also participated in the round as well as Kervis Asset Management, Boost Heroes (holding company led by Fabio Cannavale), Marco Pescarmona (founder and chairman of the MutuiOnline Group) and Rancilio Cube, the family office and impact investing group founded in Milan by the Rancilio family. Previously, the startup had collected a pre-seed round of 500k euros from Picus Capital in September 2017 and a round seed of 1.4 million euros in March 2018, led by 360 Capital Partners and also subscribed by Picus Capital and Rancilio Cube (see Crunchbase). Thanks to the last round in debt, the funds raised by Casavo, between shares and debt, rise to 50 million euros in less than 2 years.
Casavo was founded in 2017 by Giorgio Tinacci and Simon Specka. It offers an automated property valuation system, which takes into consideration over 70 variables and offers the value of their properties to potential sellers in real time and allows them to sell it immediately. After the acceptance of the offer, Casavo organizes a free inspection of the property, while the seller receives the payment within 30 days, against the average 8 months required to sell a house in Italy. The service is free: Casavo earns from an average discount of 8% applied to the market price of the property. The startup then restructures and in turn resells the property. Casavo does not compete, but collaborates with real estate agencies: over 700 have joined its network in Milan and Rome and report the properties they are in a hurry to sell. The startup is currently active in Milan and Rome, but from April it will also be present in Turin and Florence. To date Casavo has closed more than 50 real estate transactions investing more than 11 million euros and has grown from 2 to 30 employees in just over a year.

Fintech, the map of Italian companies in the portfolios of venture and private equity funds