Minibonds, coupon and maturity are decreasing. Issue size up 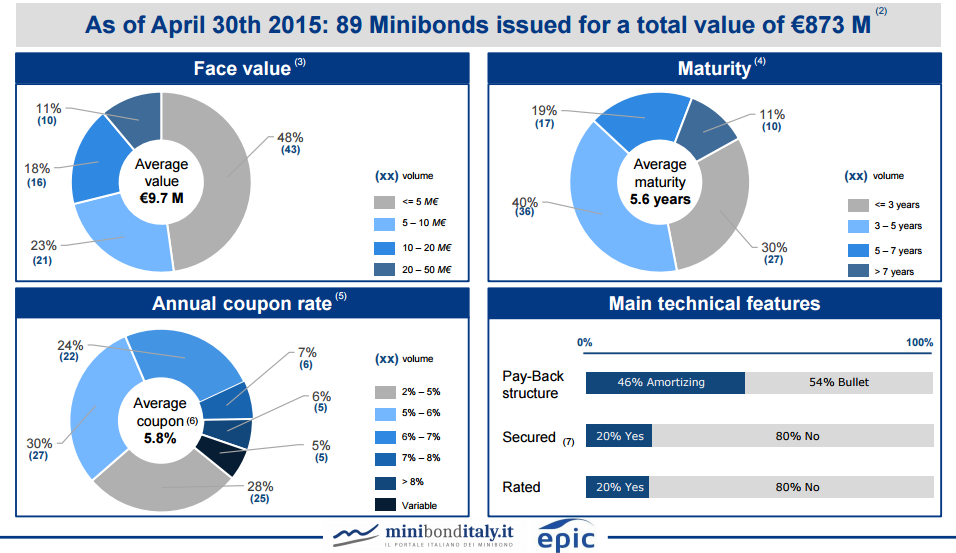 Ten minibonds (with size lower than 50 million euros) have been issued in the four months as April 30th on the ExtraMot Pro market by Borsa Italiana. Average size of listed minibonds has been increasing to 9.7 million euro (from 9.5 millions as of March 30th), with the average coupon down to 5.8% (from 5.9%) and the average maturity down to 6.6 years (from 5.8%; and it was 3.2 years if commercial papaers are included).

Data emerge from the Minibond Barometer by MinibondItaly.it and Epic Sim, for the first time prublished in its English version, which will be published on a quarterly basis, one month after the release of the Italian version of the document, in order to grant access to a constant stream of accurate data regarding the Italian minibond market.

On the whole, as of April 30th 2015 there were 109 total minibonds issued, amounting to an overall value of approximately 5 billion euros. Minibonds with face value over 50 millions count for 85% of the total value issued, while more than 70% comes from issues with nominal value of over 150 millions. About 16% of the total value issued is represented by 90 minibonds, each of them not exceeding 50 millions in nominal value.