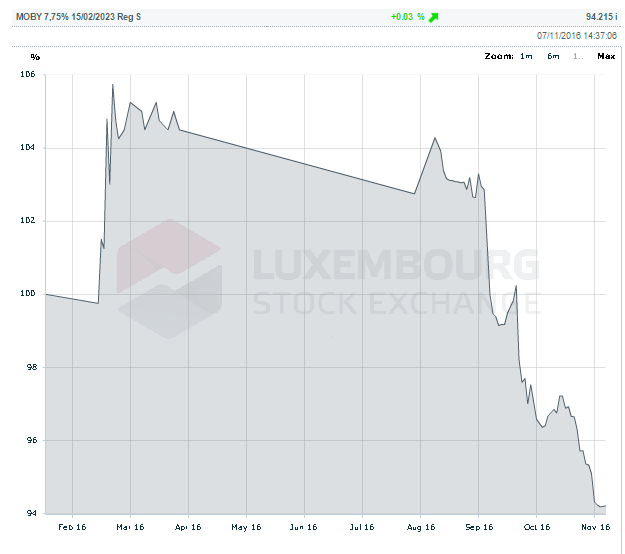 Shipping group Onorato Armatori (controlling both Moby and Tirrenia-Cin ferry companies) published a press release yesterday stating that “the 21-23% ebitda margin guidance the group had announced last September  is a positive target in the actual competitive scenario. Despite significant investments in new ships, the group’s net financial debt will be 80 million euros lower at the end of the year”.

The press release arrives after MF Milano Finanza published an article where it stressed that the ebitda margin guidance announcement last September has been lowering Moby’s 300 million euros bond‘s quotes for the last two months (see here a previous post by BeBeez), as FY 2016 ebitda might drop to about 120 million euro from 150 millions in 2015, well down the 180-190 million euros expected by the investors.  FY 2016 guidance also shows a 50 million euros drop in consolidated revenues from 609 million euros in 2015 as it previews a 28-32% drop in fright revenues and a 3-5% drop in pax & vehicles revenues.

Actually Moby stresses that “no ebitda target had been fixed when a refinancing deal had been presented to investors” last Spring. However, a 180-190 millione uro ebtida target for FY 2016 is a figure that both  MF Milano Finanz and  Il Sole 24 Ore reported investors were expecting and that is why the bond quotes had been dropping in the last two months. However the drop seems to have come to a stop last Friday at a 94.19 price, while yestarday bond price was slightly up to 94.23.

Onorato Armatori finally stressed that “the idea of MSC Group to acquire a stake in Onorato Armatori group is pure fantasy”, answering to an article published yesterday by Il Secolo XIX.