Moby's ebitda drops to 47,5 mln euro in 2018. Covenants were breached in December but banks accepted a revision 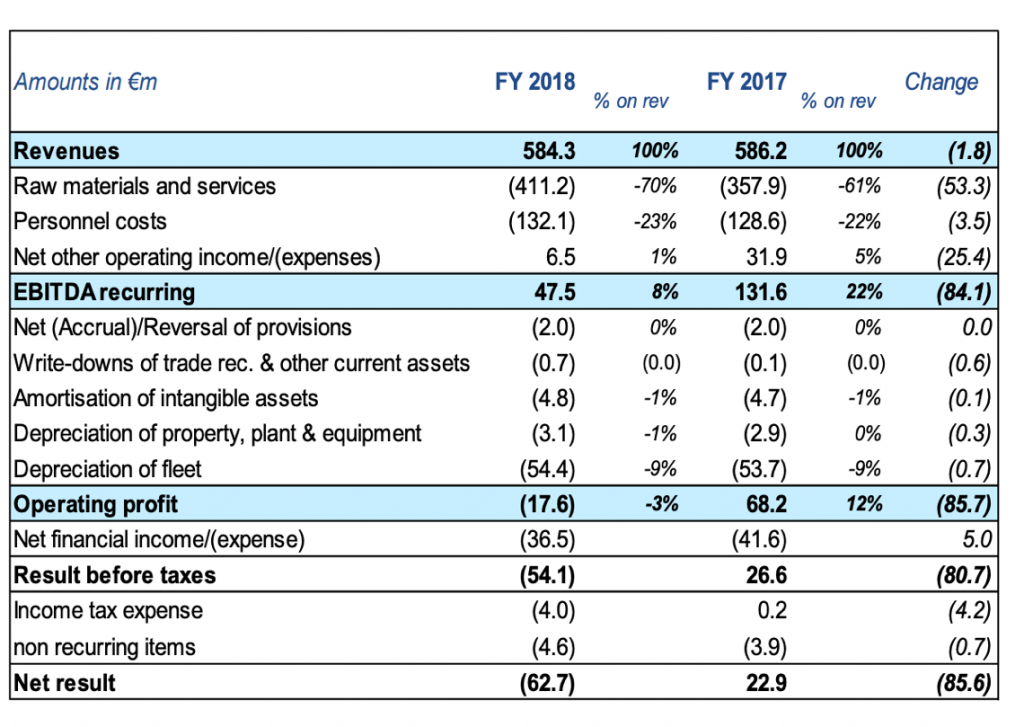 The Moby group,  navigates in troubled waters. The results of 2018, presented to the market on April 30 (see the presentation to analysts here), showed a recurring ebitda almost reduced to one third of the one at the end of 2017 (47.5 million euros versus 131.6 millions), which led to a net loss of 62.7 millions, from a net profit of 22.9 milliosn the previous year. All burning 57.5 million euros of cash, while in 2017 cash flow was generated for 71.6 million euros. Instead, turnover just recorded a slight fall 584.3 million euros from the previous 586.2 millions.
The group, that includes Tirrenia-Cin, is controlled by the Onorato family and operates in the passengers and freight maritime transportation between mainland Italy and France and major and minor islands: Sardinia, Corsica, Sicily, Tuscan Archipelago, Tremiti Islands and Malta. Moreover it operates in the sector of harbour, open water and rescue tugboats.  The bad performance, the company explained, depended on the startup costs of new routes, the increase in fuel costs (even 30.9 million euros more) and comparisons with the good performance of 2017, which benefited from of asset disposal. 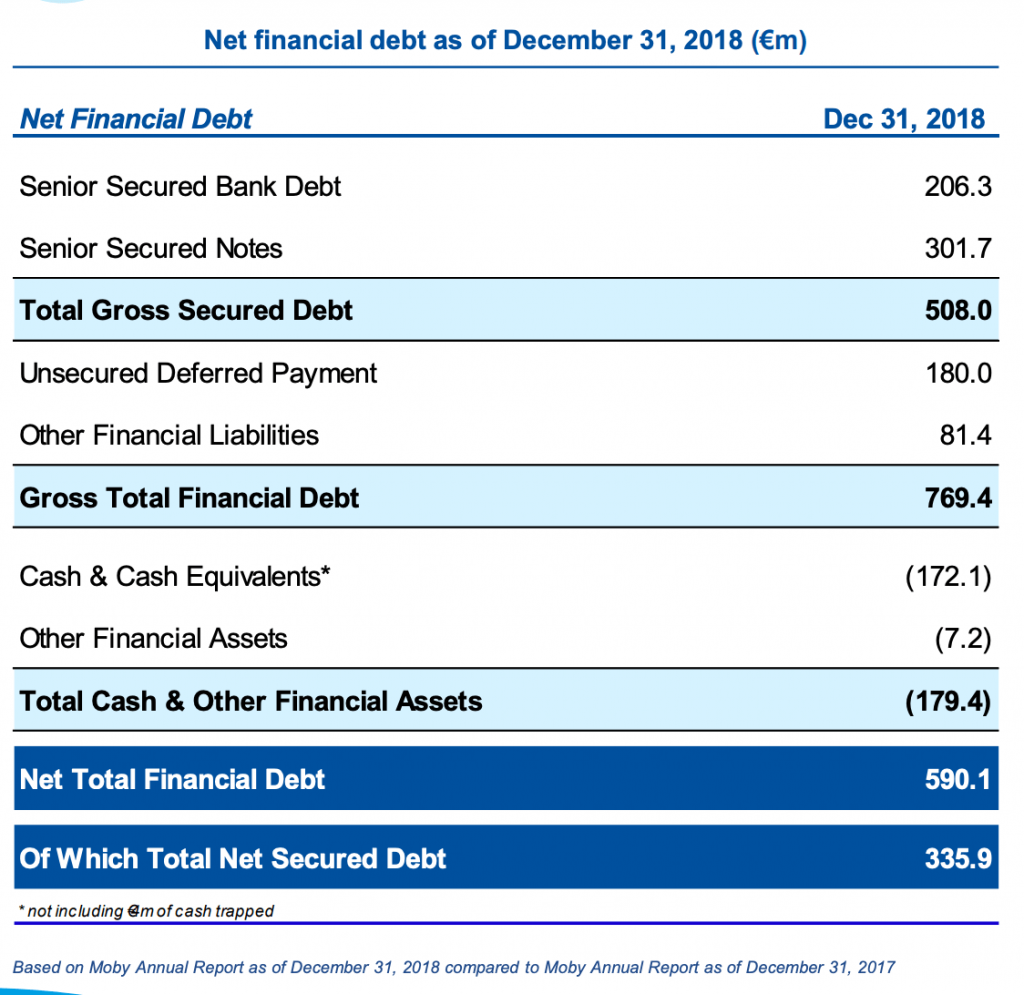 At the same time, net financial debt rose to 590 million from 496.4 million at the end of 2017 . A mix that led to non-compliance with the financial covenants originally established in relation to the senior debt for December 2018 so that the entire senior debt is now classified among short-term debts, although the characteristics of the loan, including maturity, remain the original ones. However, the banks agreed to meet Moby and basically give one year to fix the situation.
The report on the consolidated financial statements of Moby actually states that at the beginning of 2018 the parent company asked the lending banks to modify the loan agreement, which also had an impact on the covenants. The request was accepted and the covenant relating to the Consolidated Leverage Ratio (ratio between net financial position and ebitda) calculated over the last 12 months at the end of December 2017, end of June 2018 and end of December 2018 was changed. The contraction in the operating results that occurred during 2018 led however the group to not comply with the financial covenants at the end of December. For this reason the pool of lending banks agreed to eliminate the Consolidated Leverage Ratio from the list of covenants to be respected at the end of December, moving the date of the check to next 30 June 2019 and then to the end of December 2019 and so on until the loan expires. 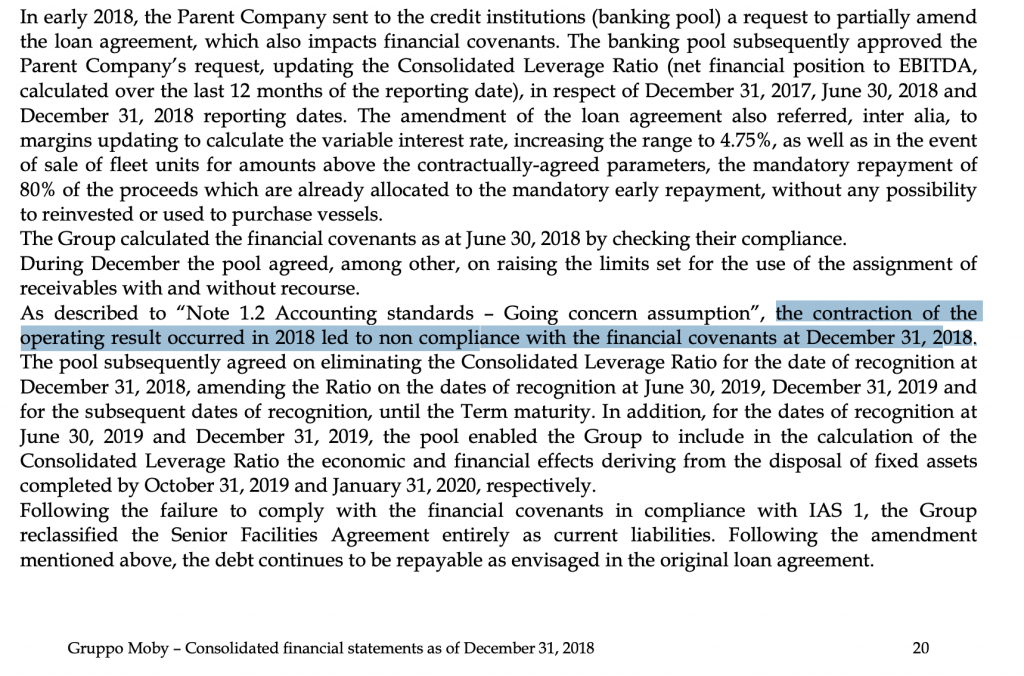 Last April the banks and Moby agreed on a new set of covenants for 2019 and 2020, with a leverage ratio of 5.5x at 30 June 2019, 4.5x at 30 December 2019 and a range of 4- 4,5x in 2020. In addition, the banks have also accepted that, for the purpose of calculating the Consolidated Leverage Ratio, in June 2019 and December 2019 the positive economic effects deriving from the sale of assets (and therefore of vessels ) which will be completed, respectively, by the end of October 2019 and by the end of January 2020 might be included.
All this is certainly not a cure-all for the quotations of the 300 million euro bond maturing February 15, 2023 and a 7.75% coupon of Moby, traded on the Luxembourg Stock Exchange. The last price recorded is that of April 30 at 42 cents, in any case above the minimum recorded in February at around 35.14 cents, following the announcement in January by S & P’s and Moody’s of a rating downgrade bringing them, respectively, to CCC- from CCC + with a negative outlook and Caa2 from Caa1, again with a negative outlook (see here a previous post by BeBeez).
That things weren’t going well was already evident from the results of the group’s 9 months in December 2018, which had shown an ebitda collapsing to 68.3 million euros from 114.6 million in the first nine months 2017, with a third quarter that had an ebitda of 77.1 million, down from 89.6 million in the third quarter of 2017. And the fourth quarter was even worse, with a negative ebitda of 20.8 million from the positive figure of 17 million in the fourth quarter 2017.
The issue of new investor in the group  to rebalance the financial situation, therefore, is becoming stronger and the Moby dossier is now more than ever on the radar of funds specializing in corporate restructuring with focus on shipping. The list gets longer every day, we talk about Pillarstone Italy, York Capital, Taconic Capital, Och-Ziff Capital Management, Oaktree and Blackstone. And on the market there are those who imagine a solution similar to the on found for another shipping company, Ignazio Messina, which was rescued by MSC (see here a previous post by BeBeez). MSC could also in this case solve the problem, with the endorsement of the lending banks and in particular of Unicredit (on the impaired shipping loans issue in italy see also this Insight View of BeBeez, only for the readers of BeBeez News Premium 12 months, discover here how to subscribe at only 20 euro per month). 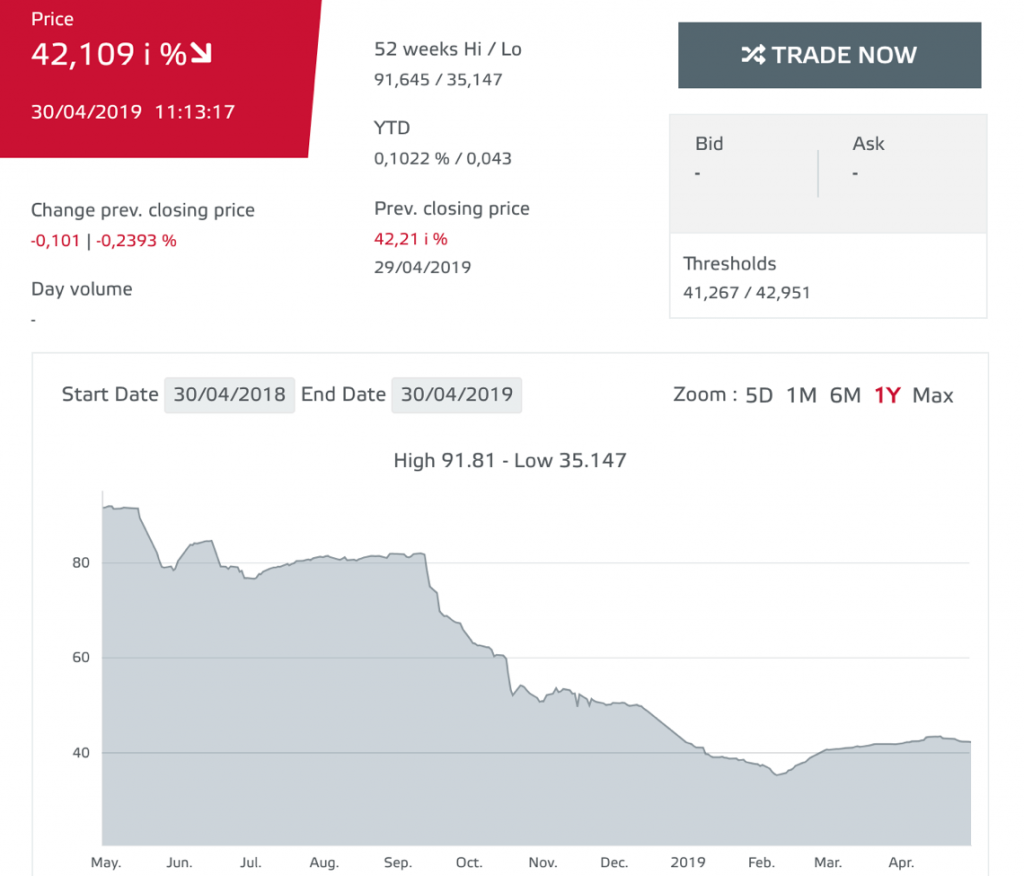