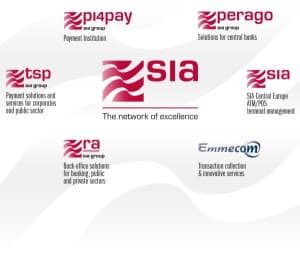 In 2013 SIA Group won considerable improvement in operating margin, net profit and revenues compared to the previous financial year (download here the press release). Founded in 1977 by the Bank of Italy, SIA is the European leader in the design and management of technology infrastructures and services for financial institutions, central banks, public administrations and businesses in the areas of payments, e-money, network services and capital markets.
At consolidated level, the group reached 380 million euro in total revenues (+9.2% from 348.3 millions in 2012), with a 106.5 million ebitda (+12,8% from 94.4 millionsi), a 75 million ebit (+15,9% from 64.7 millions) and a 48,8 million net profit  (+18,3% from 41.3 millions).

Thanks to the results achieved in 2013 with net profit of 46.8 million euro for the parent company SIA spa and using the profits carried forward, the Board will propose to the shareholders the distribution of an ordinary dividend equal to 27.19 million euro, corresponding to 0.16 euro per share and of an extraordinary dividend equal to 73.07 million euro, corresponding to 0.43 euro per share. The distribution of extraordinary dividends is subject to the closing of the contracts concerning the sale of the SIA 59.6 pct stake by the four main shareholder bank groups to Fondo Strategico Italiano (FSI), F2i sgr and Orizzonte sgr.
The sale was announced last December (download here the press release), when SIA Group was valued 765 million euro, included debt. Intesa San Paolo, Unicredit,  Monte dei Paschi di Siena and Banca Nazionale del Lavoro banks will sell their stakes to FSI, F2i  e Orizzonte sgr so that at the end of the deal FSI will have a  42.3 pct stake in SIA Group (FSI will invest 204 million euro in equity and a 77 million euro in loans) , F2i sgr a 10.3 pct stake (the fund will invest 50 million euro in equity and 18 millions in loans) and Orizzonte a 6.7 pct stake. Intesa Sanpaolo and Unicredit will remain as shareholders of the company with a total 8% interest, while Monte dei Paschi di Siena and Banca Nazionale del Lavoro, whose interests will be purchased by F2i, will exit the capital of SIA.
In 2013, the Group managed a total of 4.9 billion payments (+28% over 2012), 2.7 billion of which were carried out on cards (+8.9%) and2.2 billion relating to credit transfers and collections (+62%). On the financial markets, the number of trading and post-trading transactions rose to 28.6 billion from 22.9 billion in 2012, with an increase of 24.8%. SIA managed network traffic of 293.3 terabytes, up 36.3% compared to 2013, with a total infrastructure availability and service levels of 100% on an annual basis.
Led by ceo Massimo Arrighetti, SIA Group is made by 7 companies: the parent company SIA spa, Emmecom (innovative applications for banks and corporates), Pi4Pay (services to Payment Institution), RA Computer (treasury solutions for banks, corporates and public administrations) e TSP ( payment collection services for corporates and public administrations), Perago (infrastructures for central banks, based in South Africa) and Sia Central Europe (based in Hungary).

Third round of funding for Risparmiosuper.it