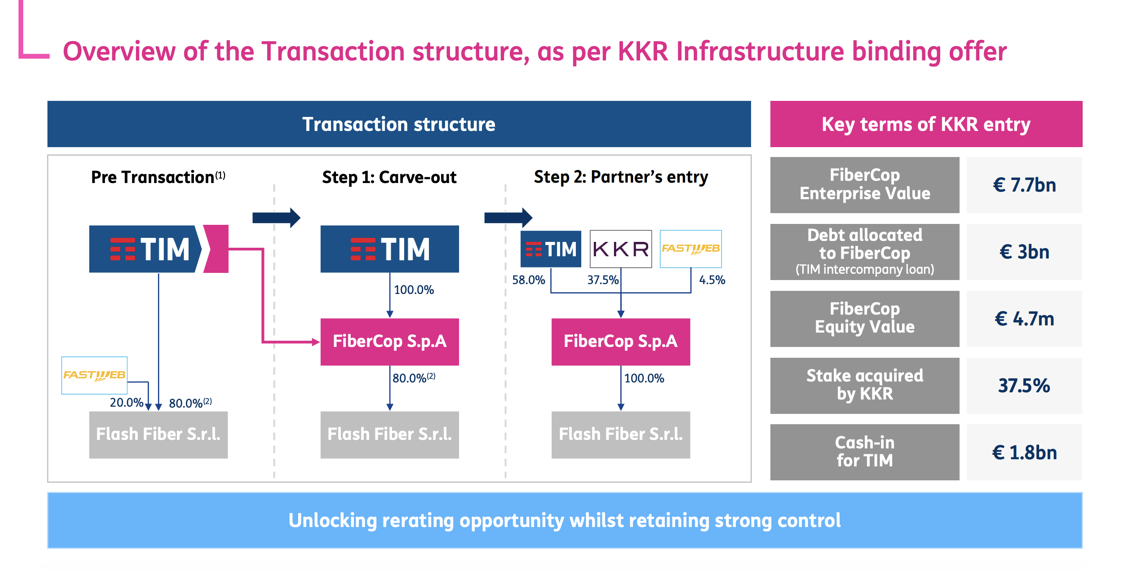 ADIA, Abu Dhabi’s largest sovereign fund, is negotiating with KKR Infrastructure funds to support it in its investment in new tlc company FiberCop, where Italian tlc giant TIM has transferred its secondary tlc fibre network (worth 500-600 million euros), Reuters said. We recall that Adia is already a subscriber in KKR’s funds, which use to syndicate their investments with their anchor investors.

The US fund, as commonly happens in this type of operation, has called the large subscribers of its fund to offer them 30% of the vehicle through which KKR holds, in fact, 37.5% of Fibercop, for 1.8 billion euros . The Abu Dhabi sovereign fund, through its subsidiary Infinity Investments, could thus come to hold up to 11% of Fibercop, provided that the Italian Government authorizes the agreement. Meanwhile, Adia has already initiated contacts in this regard.

We remind you that at the end of August TIM’s Board of Directors approved the agreement with KKR Infrastructure and Fastweb relating to the establishment of FiberCop, the newco in which TIM’s secondary network will be conferred (from the street cabinet to the customers’ homes) as well as the fiber network developed by FlashFiber, the joint venture owned by TIM at 80% and Fastweb at 20% (see here a previous article by BeBeez). The agreement may also involve other operators, as is already provided for in the memorandum of understanding signed by TIM and Tiscali (see here a previous article by BeBeez), and will allow Tim, Fastweb and the other operators to co-invest in fiber in the black and gray areas of the country and accelerating the adoption of Ultra-Broadband (UBB) services.

The agreement constitutes the first step for the implementation of a broader project to set up a single national network company, necessary for Italy’s digital development, which will involve OpenFiber, the company dedicated to optical fiber and owned by Cdp and Enel (see here a previous article by BeBeez). Last August, TIM’s BoD  and Cdp approved a letter of intent between TIM and Cdp Equity aimed at integrating FiberCop with OpenFiber, to create AccessCo, a company also open to other investors and destined to manage the single national network. AccessCo will be established through the merger of FiberCop, a company including TIM’s primary and secondary access network, and Open Fiber (see here the press release of Cdp). With Enel which is also deciding to leave the game and could sell its 50% stake in OpenFiber to KKR itself or to Macquarie (see here a previous article by BeBeez).

More in detail, as already specified by TIM on the occasion of the half-yearly report at the beginning of August (see here a previous article by BeBeez), TIM will transfer its secondary network to FiberCop; TIM and Fastweb will transfer the FlashFiber activities to FiberCop; and KKR Infrastructure will capitalize FiberCop with 1.8 billion euros. All based on an enterprise value of approximately  7.7 billion euros (equity value 4.7 billions, with TIM owning 58% of FiberCop, KKR 37.5% and Fastweb 4.5% (see here the presentation of TIM to analysts). It is expected that FiberCop will have an ebitda of around 900 million euros and a positive ebitda-Capex starting from 2025 and will not require capital injections from shareholders. The closing of the transaction is expected by the first quarter of 2021, once the authorizations of the competent authorities have been obtained.

In the meantime, the second phase of the project will be prepared, namely the establishment of AccessCo, from the merger between FiberCop and OpenFiber. Before the merger, TIM is expected to confer an additional business branch into FiberCop, which consists of the primary network functional to FiberCop’s operational activities. To this end, evaluations of the two assets will be conducted in the fourth quarter of the year. The due-diligence process is expected by the end of the year with a view to reaching a possible merger agreement no later than the first quarter of 2021.

According to the agreement, TIM will hold at least 50.1% of AccessCo and through a governance mechanism shared with Cdp Equity, the independence and impartiality of the company will be guaranteed. In this regard, qualified majority mechanisms and preventive control rules are envisaged. Cdp, through its subsidiary Cdp Equity, aims, with its shareholding in AccessCo, to ensure the presence of a long-term strategic partner. The closing of the transaction is subject to the authorizations of the competent authorities. TIM and Cdp Equity also undertake to evaluate other areas of possible cooperation to pursue the development of other technologies (5G, hedge computing, Data Center, Cloud and more), so as to facilitate the rapid introduction of innovative technologies that improve accessibility.

Meanwhile, the Australian fund Macquarie is also preparing to syndicate the purchase of the stake in Open Fiber that it will acquire from Enel (see Reuters here). OpenFiber is now jointly controlled by Enel and Cdp Equity. In its offer arrived in mid-September (see here a previous article by BeBeez), the Australian fund has valued the entire company 7.3 billion euros, also considered 2 billions of the company’s debt and considering that the offer for 50 % of equity value of Open Fiber provides for the recognition of a consideration of approximately 2.65 billions, net of debt and with adjustment and earn-out mechanisms (see the press release here).

Investindustrial buys three fertility clinics in Italy through its portfolio company GeneraLife, becoming one the major European players in the market