May, June and July were three months of fireworks for Investindustrial, the private equity firm founded by Andrea Bonomi, who, interviewed for MF Milano Finanza by Stefania Peveraro, editor in chief of BeBeez, stressed that “after all, these deals are almost normal administration for an operator like us, who manages a total of 10 billion euros and must have a turnover of at least 15-20% of the capital in purchases and sales each year, considering that on average the investment period is 5/6 years. In the last 12 months we have invested for 1.5 billion and divested for 1.9 billion”.

This is it. But only in the last week Investindustrial announced the agreement to bring the Ermenegildo Zegna group on the New York stock exchange with its Spac and the sale of Lifebrain, the largest Italian laboratory diagnostics group, to Cerba HealthCare, in turn. participated by the Swedish fund EQT, flanked by PSP Investments. While in recent days, Guala Closures left the Italian Stock Exchange following the conclusion of the last stages of the takeover bid, which brought Investindustrial to 100% of the group specializing in the production of safety closures for beverages. Shortly before, the private equity firm sold its stake in the Italian-US chemical group Polynt-Reichold to the former joint venture partner, Black Diamond, signed the agreement to sell control of the luxury brand Sergio Rossi to the Chinese conglomerate Fosun and bought Targa Telematics, specialized in telematics solutions, smart mobility and digital IoT platforms for mobility operators. Not to mention two other deals closed on the US market, namely a rich exit from Knoll, the interior furniture group listed on the NYSE on which Investindustrial VII fund had focused in June 2020; and the acquisition of the Californian e-commerce company YDesign Group, by International Design Holding, the luxury furniture and design platform that Investindustrial controls in a joint venture with private equity firm Carlyle. 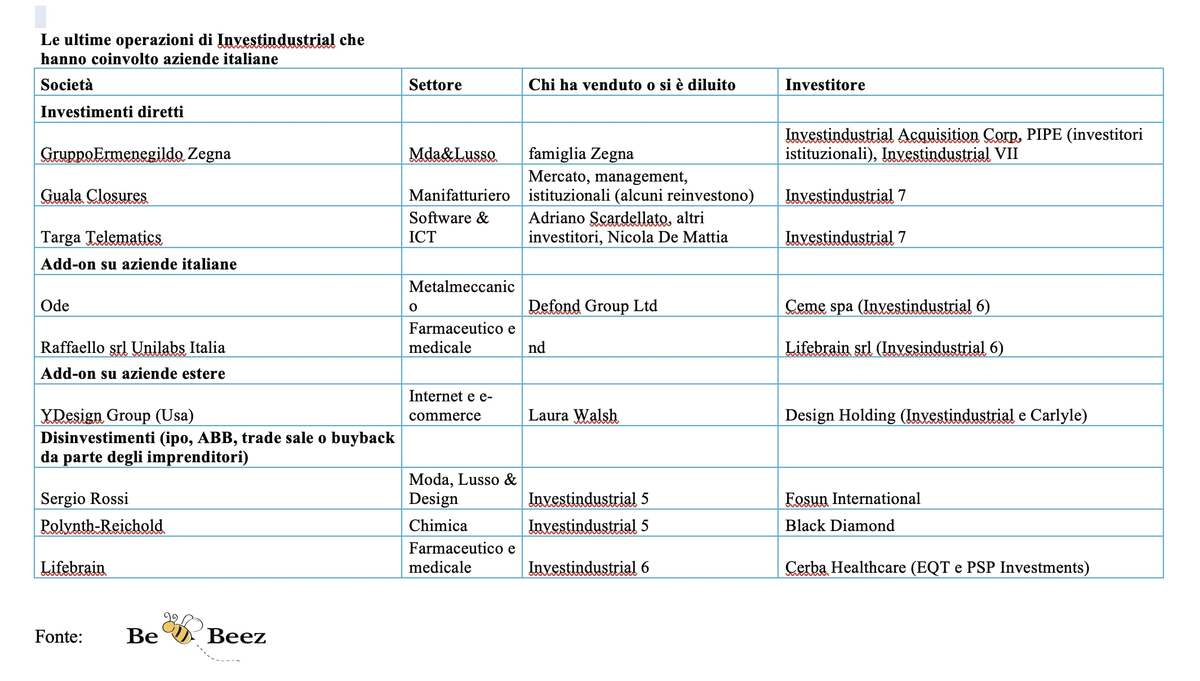 Having said that, precisely Mr. Bonomi said that all this represents only in part the effect of a return to full activity after a moment of less intense activity due to Covid-19: “In truth we have worked a lot all over the past 12 months, therefore also in 2020. We must not think only of the operations that the fund conducts directly, but of those conducted by the companies we already have in our portfolio. Last year we worked a lot on this front and our subsidiaries closed 23 acquisitions investing a total of 516 million euros. That doesn’t seem like a small thing to me”.

And of course it is true, it is not cheap. But it is also true that deals that strike collective imagination are the ones like the Ermenegildo Zegna one. Where we remember that there are 880 million dollars at stake, or the 403 millions that will come from SPAC, the 250 millions from institutional investors participating in the PIPE and the 225 millions from the forward purchase agreement that has committed the Investindustrial VII fund. And, although of this total 546 millions will go to the Zegna family, the remaining 334 millions are all fresh capital that will arrive in the company when the business combination with Spac Investindustrial Acquisition Corp  goes through. By the way, as for his experience with a US Spac, Mr. Bonomi has in any case held back on the possibility of immediately replicating it: “For the moment we want to see how this first experience will go. At the moment it seems to be a success and it was the most suitable tool to meet the needs of a group like Zegna, which wanted a strong partner and at the same time wanted to go public in the United States, without having to depend on the mood of the market. There are other large Italian family groups that instead preferred to go to Wall Street alone, without a partner (see for example Stevanato, note of the editor). Because I would like to emphasize that in our Spac we are not only promoters, we are long-term investors, who will support the family in its international growth project in the USA, but also in the rest of the world, in China in particular “.

And in fact, however, actively supporting companies in international growth requires dedicated people and an international presence. In short, it takes a heavy structure. Not surprisingly, Mr. Bonomi said: “We are now about 150 professionals around the world. Of these, 15 are in the New York office and another 10 in the Shanghai one. A strong local presence is now necessary to do this job. We specialize in so-called mid-market companies and we must be ready to make investments ranging from say a 30 million euros ticket up to one billion and we must be able to accompany our subsidiaries in acquisitions of this type anywhere in the world. . In this way we are able to seize all the opportunities that present themselves to us “.

And Investindustrial’s formula will always remain the same. At least until the competition begins to undermine its success. “We have chosen not to follow the approach adopted by large international private capital firms that have teams and funds that are distinct by geographical area and investment approach”, Mr. Bonomi said, “we are very good at what we are doing and therefore precisely we will continue to use our mid-market private equity funds to invest in Italy, Spain, Europe and globally by leveraging the fact that we are of Italian origin and have some expertise in specific sectors. Actually you cannot talk about Italian-only or only foreign-only deals. As for the sectors we have been working for some time now on the basis of macro-trends that we believe will guide the world in the next 5-10 years. For example 5 years ago, following a series of studies and analyzes, we have identified the ingredients and nutraceuticals sectors as drivers of the wider food sector. We are now preparing to increase the weight of investments in technology and in particular in infrastructure tech, aiming for ESG objectives, because this is where a company must and will have to invest if it wants to remain competitive and grow. It is no coincidence that in the next 18 months we will invest, only for our internal needs, 3.5 million euros in IT and in artificial intelligence tools, partly already carried out, to analyze the texts of the contracts of the deals that are closing, in such a way as to make sure they are all in line with our legal standards. ”

Returning to the numbers, the Investindustrial VII fund had raised 3.75 billion euros of commitments in December 2019, in addition to other funds already active for about a further 2 billions (among them 375 million euro for its Investindustrial Growth fund in 2018 and  600 million euros for the  CIICF (China-Italy Industrial Cooperation Fund) launched together with Unicredit e CIC in October 2020).

Fund VII “is currently invested only for 40%, so it still has a lot of room for maneuver”, Mr. Bonomi explained, adding that he cannot provide the performance of this single fund to date, but that “globally it can be said that from 1990 to today, with 54 divestments, we have respected an average gross Irr of 25% per annum “. This performance, he said again, “comes from the combination of the company we invest in and the partnership with us. Investindustrial creates value by supporting quality companies in the development of ambitious plans for international development, in which Italy represents the core business. Take, for example, the case of GeneraLife. We invested in the largest clinic in Madrid dedicated to fertility services in 2019 with a team of 90 people and in 24 months we supported a plan that made GeneraLife the third largest group European sector “.