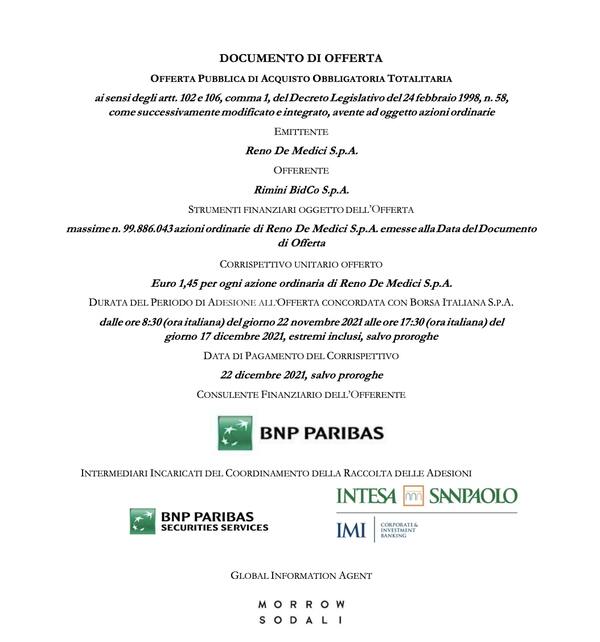 The takeover bid was launched on 1 December after Consob, the Italian Supervisory Authority on Financial Markets, had given the green light for the publication of the Offering Document on November 18th (see the press release here). Consob had suspended its examining procedure at the beginning of November asking the company to make changes and additions to the prospectus. In the meantime Rimini Bidco had proceeded with daily purchases of RdM shares on the market (see here a previous article by BeBeez).

We recall that last July Rimini Bidco signed an agreement to take over approximately 67% of Reno de Medici, one of the main European producers of recycled-based cardboard listed on the Star segment of Piazza Affari. Hence the takeover bid obligation (see here a previous article by BeBeez).

The shares were sold by Cascades Inc., one of the main Canadian paper groups, which up to now holds 57.6%, and the compatriot Caisse de Depot et Placement du Quebec, which in turn owns 9.1% (see here the press release print of Apollo and here that of Cascades). The purchase took place at the price per share of 1.45 euros, for a total of over 365 million euros, based on an enterprise value of approximately 553 million euros. The valuation corresponds to approximately 7.8-7.9x the ebitda expected by analysts for 2021 (around 70 million euros).  The mandatory takeover bid will be launched at the same price of 1.45 euros per share.

The share price has substantially aligned with the takeover bid price since July. At the moment, however, subscriptions to the takeover bid are still very limited: last Monaday 13 December only  10,588,425 shares had been brought to the offer, equal to 10.6% of the offer. From the point of view of the effectiveness of the offer, there is no problem, because, since it is a compulsory totalitarian offer, there are no conditions of effectiveness. Given that Apollo’s objective is, however, the delisting from Piazza Affari, in the event that the delisting should not be carried out at the end and due to the effect of the mandatory offer, it can then be achieved through the merger of Reno de Medici in Rimini. or in another company controlled by the Apollo funds.

Rimini Bidco will finance the operation, including any refinancing of RDM’s existing debt, through a combination of its own funds and a bank loan for which a full commitment has already been obtained from leading international banks.

The stock benefited from a policy of gradual international expansion of Reno de Medici, active in 70 countries, also carried out through acquisitions, the latest of which were the one of the Spanish Papelera del Principado, and the one concluded in June on the Dutch Eska (see here a previous article by BeBeez). A few months earlier, in February, the Italian paper group had instead sold its French subsidiary La Rochette to the German holding specialized in turnaround Mutares to focus on the production of cardboard from recycled material (see here a previous article by BeBeez).