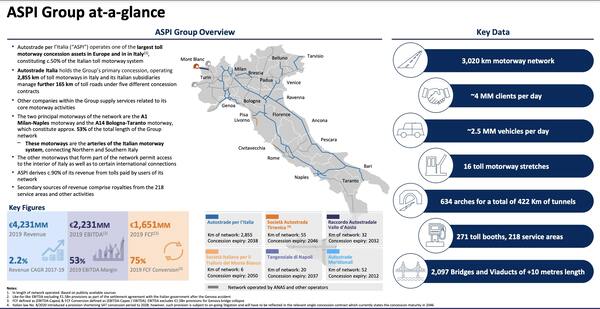 The official signing of the agreement for the transfer of ownership of 88.06% of Autostrade per l’Italia (ASPI) from Atlantia to the consortium composed by CDP Equity, Blackstone Infrastructure Partners and Macquarie Asset Management arrived on Saturday 12 June (see here the press release). The acquisition is expected to be completed in the coming months, after having satisfied the usual conditions for closing and having received the necessary clearance from the competent authorities.

The signing follows the favorable vote of the shareholders of Atlantia, the Milan-listed infrastructure holding controlled by Edizione Holding of the Benetton family, which had approved the offer presented by the consortium in the ordinary meeting at the end of May (see here a previous article by BeBeez).

The note released on Saturday does not speak of figures, but for weeks rumors were of an offer of 9.3 billion euros (of which 200 millions by way of bank commissions). The acquisition will be made through the newco Holding Reti Autostradali spa (HRA), owned (directly or indirectly) by CDP Equity (51%), Blackstone Infrastructure Partners (24.5%) and the funds managed by Macquarie Asset Management (24.5%).

In the meantime, the consortium will launch an exploratory dialogue to understand the orientation of the minority shareholders of ASPI, who have the right to co-sell, on the remaining 11.94% of the company they own. We recall, in fact, that the Appia consortium (formed by Allianz Capital Partners, EDF Invest and DIF), and the Chinese fund Silk Road Fund had bought, respectively, 6.94% and 5% of ASPI in 2017 on the basis of an enterprise value of the entire ASPI of  14.8 billion euros (see here the press release of August 2017 and here the one of April 2017).

Jiri Zrust, senior managing director of Macquarie Asset Management, said: “A significant increase in investment is needed to provide the efficient, safe and sustainable road infrastructure needed to keep Italy moving. We look forward to working with our partner to ensure that Autostrade per l’Italia takes up this challenge, seeking to modernize and strengthen its road network for the benefit of communities and the economy. Macquarie has been investing in Italy for almost two decades and we are pleased to be able to continue to support the development of essential infrastructure of the country through this partnership with CDP Equity and Blackstone Infrastructure Partners “.

ASPI is one of the main motorway operators in Europe and manages over 3,000 km of motorways in Italy, with long-term concessions. ASPI and its subsidiaries are responsible for the development, maintenance and management of a motorway network that extends throughout the national territory and represents about half of the motorway system subject to toll in Italy, with approximately 4 million customers per day (pre -Covid, see here the analysts’ presentation of January 2021).

The main investment objectives of the Consortium are: to contribute to the implementation of a vast investment plan for the entire ASPI motorway network; promote the improvement of the network to facilitate digitization and innovation; improve the efficiency of infrastructure maintenance programs to ensure the highest levels of performance and safety for motorists; offer long-term stability in the management of an essential Italian infrastructure for the community and the economy.