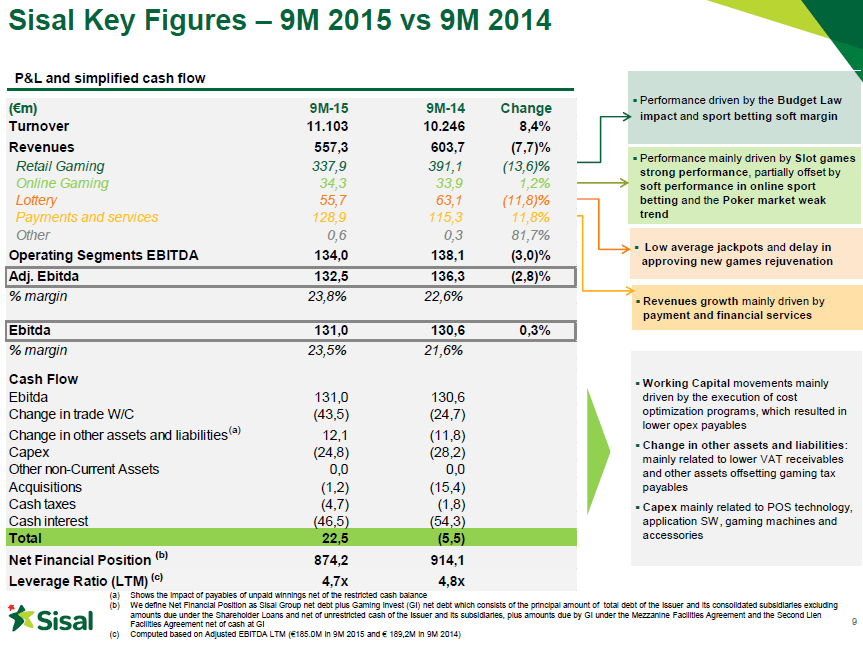 Auction for sale of  Sisal spa, Italy’s second largest gaming company and largest convenience payment services provider, is to start in the next few weeks as Sisal’s shareholders have hust given mandate to Deutsche Bank and Ubs for the sale process, Il Sole 24 Ore wrote.

Sisal has been 97% controlled by Permira, Apax and Clessidra funds since 2006. The funds tried to divest in 2014 through an ipo, but they decided then to cancel the deal due to market turmoil and to an objective difficulty in selling a company which was still overloaded by debt and with a negative net result (FY 2013 consolidated statement showed 98 million euros in net losses).

In the meantime Sisal has registered a better performance and FY 2014 closed with 821 million euros in consolidated revenues (+6.3% from 2013), an adjusted ebitda of 188.8 millions (+7.6%) and only 2.32 millions of net losses. Net financial debt was still rather high at 894 million euros then.

In the nine mohts ended on September 30th 2015  revenues amounted to 557.3 millions from 603.7 million for the nine months ended September 30, 2014, due in particular to the impact of the Budget Law 2015 on gaming machines revenue, which provides a reduction of the fees paid to gaming machines concessionaires for the concession activities, amounting to a total of 500 million and to be divided between the concessionaires according to the number of gaming machine rights held in their names on December 30, 2014.

Italy’s government publishes a handbook on incentives for companies