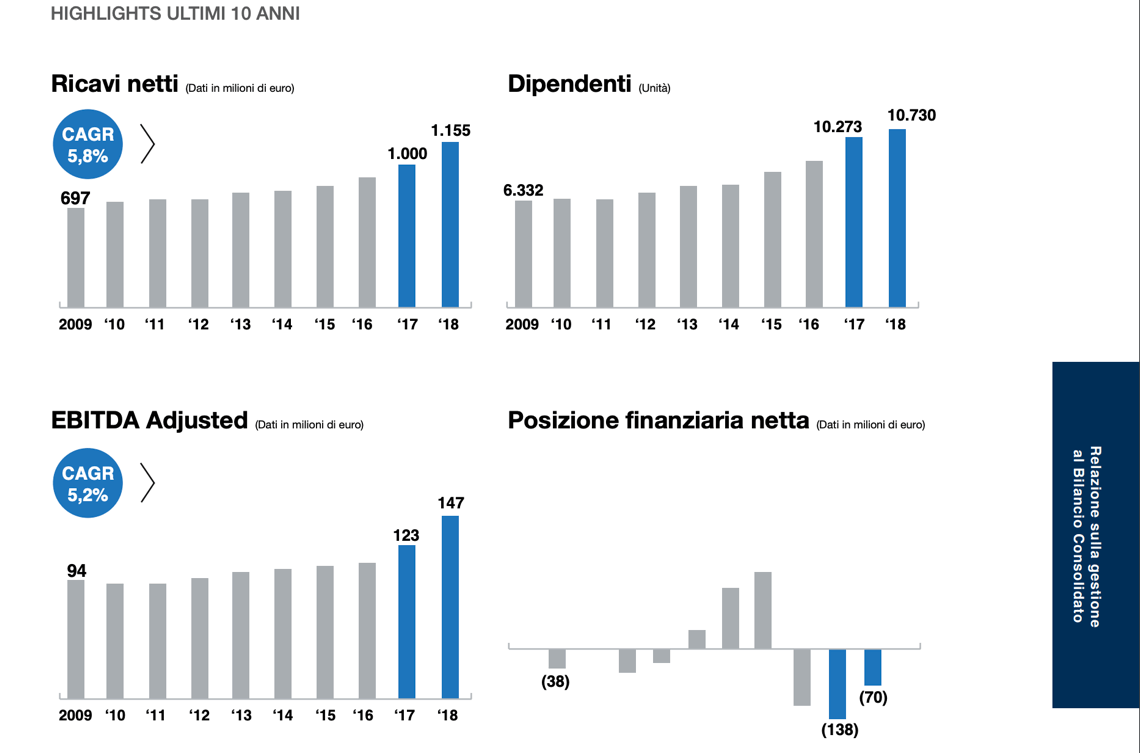 Bain Capital announced yesterday the signing of the agreement to acquire control of Engineering Ingegneria Informatica spa, the group specialized in software and technology development at the service of public and private companies, so far controlled at 88% by funds managed by Apax Partners and NB Renaissance, which had delisted the group from the Italian Stock Exchange in Summer 2016 (see here a previous article by BeBeez). The deal was expected from last December (see here a previous article by BeBeez) and, as already rumored  from last Spring (see here a previous article by BeBeez) Apax will completely exit the capital, while NB Reinassance will reinvest with new funds, as well as the top management led by the ceo Paolo Pandozy, who has been confirmed in his role (see the Engineering press release here and the NB Renaissance press release here). As for the founder of Engineering, Michele Cinaglia, who owned 12% of the group, in turn will sell his stake, but will remain in the company, leveraging his experience and leadership to continue supporting Engineering in this new path of growth and development. . The closing of the transaction, subject to the fulfillment of the standard suspension conditions, is expected by the end of April 2020.
At the time of the takeover by the private equity funds in 2016, the group had been valued at 846.5 million euros, while today the group is said to be valued at 1.5-1.6 billion euros, equal to 9.5-10x the adjusted ebitda for FY 2019. This is because today Engineering is a very different group from the one it used to be in 2016. In the period it completed 19 acquisitions both in Italy and abroad, acting as a consolidation platform in a still very fragmented market, creating a track record of success in the integration and expansion of its portfolio of proprietary solutions. In particular, among the latest deals are the one closed last September 2019, when the group took over 100% of the Italian fintech startup Deus Technology (see here a previous article by BeBeez) and the one announced last October when the group bought 80% of Digitelematica srl ​​software house (see here a previous article by BeBeez). Engineering revenues have thus increased in four years to a Cagr of 11% (from 851 million euros in 2015 to about 1.3 billion euros in 2019), the EBITDA has also increased to a Cagr of 11 % (from 105 million euros in 2015 to around 160 million euros in 2019) and the number of employees went from around 8,100 in 2015 to over 11,000 in 2019.
Based in Rome, Engineering is among the main companies involved in the digital transformation of companies and public and private organizations, with an innovative offer of platforms for the main market segments. Active with 65 offices (in Italy, Belgium, Spain, Germany, Switzerland, Norway, Sweden, the Republic of Serbia, Brazil, Argentina and the Usa), Engineering designs, develops and implements innovative solutions for the business areas in which digitization generates the major changes, including Digital Finance, Smart Government & E-Health, Augmented Cities, Digital Industry, Smart Energy & Utilities, Digital Telco & Multimedia.
In 2018 Engineering had reached a production value of 1.18 billion euros, + 15% from a share of one billion euros reached at the end of 2017, when it had already grown by over 10%. Adjusted ebitda reached 147.2 million from 122.9 million in 2017 (+ 19.8%), when it had already grown by 13.5%, and net profit was 57.7 million (+ 10% from 52.3 million the year before, when it had grown by 15.3%). All with a net financial debt down to 69 million from the previous 138 million (see here a previous article by BeBeez and here the 2018 financial statements).
Speaking of debt, the new buyout round will be financed by Italian banks (including Banca Imi and Unicredit) and international banks (Bnp Paribas, Credit Suisse and Deutsche Bank). In the deal, Engineering was supported by PwC for the vendor due diligence, while the law firm Accinni, Cartolano and Associates acted as advisor to the management team. As for NBRP, its advisors were Gatti Pavesi Bianchi (legal ), Bain & Co (commercial), New Deal Advisors (accountant), Di Tanno e Associati (tax & structuring), Kirkland & Ellis (legal for financing). Banca Imi, together with Lazard, acted as financial advisor to NBRP after being involved in the 2016 de-listing. The seller funds managed by NBRP and the Apax funds were assisted by Rothschild & Co (financial advisor), Simpson Thacher & Bartlett and BonelliErede (legal) and PwC (tax).
NBRP and Bain Capital have declared themselves ready to support Engineering in the next growth phase, taking advantage of the opportunities that are emerging in the digital sector, in which Engineering is well positioned, so as to strengthen its leadership in the Italian market and consolidate its presence abroad , including through acquisitions.
Luca Bassi, managing director of Bain Capital Private Equity, said: “We believe that the Engineering Group has the potential to grow further in a still highly fragmented market, both organically and through acquisitions, and we are looking forward to collaborating with management team and Neuberger Berman to accelerate this process. ”
Stefano Bontempelli (senior partner) and Michele Quaranta (partner) of NBRP, commented: “Engineering fits perfectly with NBRP’s investment strategy, representing an undisputed market leader in a growing and fragmented sector, with a great and sustainable advantage competitive. The decision to invest again in the company through new capital from different funds is a clear sign of the significant growth potential, both internally and through acquisitions “.
Michele Cinaglia, founder and chairman of Engineering said: “During 2020 we will celebrate 40 years of Engineering history. In these decades we have always had a clear mission: to accompany the country through technological evolution, always staying one step ahead thanks to the constant reinvestment of capital in the company and to the care and training of our employees, today well over 11,000, which represent for skills and reliability the Group’s main asset. For them, in particular, I am happy to be able to confirm, thanks to the agreement with all the shareholders, the decisive continuity of direction and strategy which, I am sure, will still offer many possibilities for growth on all levels, in business, professional and human terms ” .