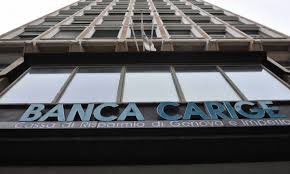 Italy’s Banca Carige confirmed yesterday rumors about a non binding and unsolicited bid from US Apollo Global Management for buying control of the bank (see here here the press release). The bank explained that it had received two different letters from Apollo proposing to buy the whole non performing loan portfolio of the bank (about 3.5 billion euros at gross value) and to subscribe a 500 million euros capital increase reserved to the fund (with 50 millions more offered to actual shareholders).

More in detail, the bank explained, with a first letter dated February 10th 2016 the Board of Directors had “received a letter, unsolicited by the Bank, from the fund Apollo Management International LLP, whereby the fund submitted a non-binding and confidential proposal for presenting, subject to certain conditions precedent being met, a binding offer to acquire the portfolio of bad loans (sofferenze) of the Group, offsetting the effects incurred with a EUR 625 mln capital increase (fully underwritten by Apollo-affiliated funds), of which EUR 525 mln reserved to certain Apollo-affiliated funds and EUR 100 mln open to existing Shareholders”.

With a second letter delivered on the evening of 23 March, the Board “received a revision of the letter dated 10 February 2016, again unsolicited by the Bank, from the same fund Apollo Management International LLP, whereby Apollo confirmed its non-binding and confidential proposal for presenting, subject to certain revised conditions precedent being met, a binding offer to acquire the portfolio of bad loans (sofferenze) of the Group on revised terms, offsetting the effects incurred with a EUR 550 mln capital increase (fully underwritten by Apollo-affiliated funds), of which EUR 500 mln reserved to certain Apollo-affiliated funds and EUR 50 mln open to existing Shareholders”.

At the same time Apollo is said to have softened some of the conditions. Carige’s press release does not say anything about the price offered by Apollo for the Npl portofolio but that is said to be a 20% of the gross value which means about 695 million euros. A figure that would force the bank to soffer 700 million euros in new losses which would be partially covered by the proposed capital increase.

The press release ends saying that “on account of the forthcoming expiry of the term of office of the current Board of Directors of the Bank, any assessment and determination with regard to Apollo’s revised non-binding proposal which was received on 23 March 2016, will -as expressly requested by the Fund- fall under the remit of the new Board of Directors which will take office after the Shareholders’ Meeting of 31 March 2016”.

The new Board will se many representatives from a list put forward by Mr. Vittorio Malacalza, the major shareholder owning a 17.58% stake through its Malacalza Investimenti, who will appoint also the new chairman (Giuseppe Tesauro) and the ceo (Guido Bastinini). Malacalza signed an agreement with Fondazione Carige on a 19,5% stake of Carige’s capital and he would soffer a strong dilution of its ownership if Apollo subscribes the proposed capital increase. On the whole deal the European Central bank is said to watch carefully and to look favourably at Apollo’s proposal as it would end all Carige’s problems.

Apollo Management already knows well Banca Carige’s world as it had bought Carige’s insurance companies in October 2014 while entered in exclusive talks for the bank’s consumer loan business Creditis Servizi Finanziari last year ( (see here a previous post by BeBeez, but the bank decided then to stop the sale).

In the meantime Banca Carige stock jumped 4.8% yesterday at the Milan Stock Exchange closing at 0.6 euro per share after having reached an intrady top at 0.637 euro.