Blackstone to sell its 33% stake in De Nora to Snam, which will be the anchor investor of a new investment fund focused on energy transition 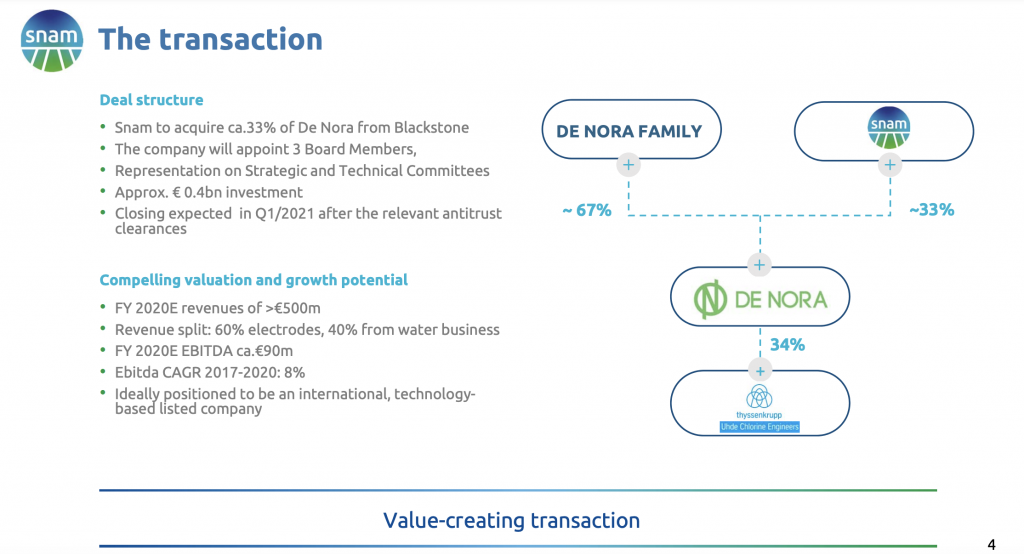 Snam, the Milan-listed Italian leading group specialized in energy infrastructures, acquired a 33% stake in Industrie De Nora spa, the Italian group active in the design, production and supply of electrochemical and water treatment technologies while Blackstone Tactical Opportunities fund made its exit from its 32.6% investment on the basis of a 1.2 billion euros enterprise value for 100% of the company. The acquisition, which is expected to be completed in the first quarter of 2021 following the relevant Antitrust authorizations, will be made by Snam with its own funds (see here Snam’s press release and here the one by Blackstone). De Nora’s management will also reinvest for a small amount. Blackstone’s exit from De Nora was expected (see here a previous article by BeBeez). Blackstone had entered the company’s capital in April 2017 (see here a previous article by BeBeez). The value of that deal had not been disclosed, but when De Nora was still thinking about a listing on the Italian Stock Exchange, at the end of 2015, rumors where of a 900 millions enterprise value (see here a previous article by BeBeez).

Founded in 1923 by Oronzo De Nora, De Nora is today the first group in the world in the supply of electrodes for electrochemical processes (chlor-soda industry, galvanic treatments, electronics, electrochlorination, electrochemical prevention of corrosion, storage of energy from renewable sources and components for fuel cells) and is among the leading players in technologies and processes for water filtration and disinfection (potabilization, process water treatment, industrial and civil wastewater, ballast water treatment). In particular, the company has launched a new generation of electrodes, essential for increasing the performance and competitiveness of hydrogen produced through alkaline electrolysis, making the production of hydrogen through water electrolysis increasingly competitive in economic terms. In synergy with the electrodes business, De Nora has held a 34% stake in ThyssenKrupp Uhde Chlorine Engineers (TKUCE) since 2015, one of the world leaders in the development, assembly and installation of alkaline electrolyzers and in the production of chlorine and caustic soda (see here a previous article by BeBeez). TKUCE’s alkaline electrolyser technology is used in several large global hydrogen projects.

For Snam, this is the first step in an operation that will see the launch of an investment platform dedicated to the energy transition. More specifically, in fact, Snam will be anchor investor of this new specialized investment fund that will be launched in 2021 to respond to the growing interest in the energy transition and decarbonisation. The platform will focus on a limited number of mature companies at the forefront of energy innovation and exposed to the mega-trends of the energy transition and decarbonization. During the conference call with analysts yesterday morning, Marco Alvarà, ceo of Snam, said that the investment in De Nora has “a long-term perspective”, but that “part of the stake will be transferred to the new investment platform dedicated to the energy tranition for which an investment team of professionals has already been identified “(see the presentation to analysts here).

Mr. Alverà added: “The strategic partnership with an Italian company of excellence, a global innovator in sustainable technologies and with important development prospects in hydrogen, is a unique opportunity to strengthen Snam’s role in the energy transition. The partnership with De Nora will allow us to be a leader in the development of green hydrogen, which is becoming a key element of decarbonisation in Italy, Europe and many countries around the world. Thanks to this operation and the new energy innovation platform, we will be able to increase our exposure to new green technologies while remaining focused on our core business, making a contribution to achieving the global objectives of zero net emissions “.

As for De Nora, ceo Paolo Dellachà explained to BeBeez, “the gorup will take advantage of the fact that it has now a strong industrial partner, able to interact with politics, who wants to focus on energy transactions and new technologies, in particular the one relating to hydrogen, an aspect on which the two groups were already collaborating. De Nora, thanks to the joint venture with ThyssenKrupp, is able to unload the technology and to efficiently build new operative plants. Today we already have a production capacity of 1 GW, but within two years we can reach 2 GW. This is a really important capacity and we are talking about investments worth billions of euros, with potential huge returns. But to date, I cannot give precise numbers, because we are at time zero and, although we are already operational, it is really difficult to make predictions “.

De Nora generates revenues of over 500 million a year (60% in electrodes, 40% in water treatment), with an expected ebitda of around 90 million in 2020 and an average growth (CAGR) of 8% in the last three years. De Nora has always used equity and bank credit lines to finance its investments. “The group generates a lot of cash and we have a very low debt. We will end 2020 with a net financial position of 100 million euros, which compared to 90 million ebitda is very little”, Mr. Dellachà said to BeBeez.

As for the future, both shareholders of De Nora, ie both the De Nora family and Snam, agree that the fate of the group will be on the stock market. As mentioned, however, the family had already thought about it several times between 2015 and 2016 (see here a previous article by BeBeez).  “We were eligible for listing then and we are now. But if we want to make a stellar listing, we have to wait a little longer to be able to capitalize on the development of the hydrogen business and demonstrate that we are unique in having substantial order books,” Dellachà concluded.

Federico De Nora, president of De Nora, said: “The Blackstone team has demonstrated excellent knowledge of our business and the market, supporting us in redesigning our organization to achieve significant growth by achieving the solid positioning we have today. excited to start working with Snam, our new minority shareholder, to face the next phase of our history alongside an industrial partner that offers significant operational synergies and with whom we share the commitment to support the global energy transition for a world Cleaner”.

Andrea Valeri, senior managing director and president of Blackstone Italy, said: “Our investment in De Nora stems from Blackstone’s successful experience in supporting family businesses in achieving their goals. We are proud to have helped De Nora, a leader in sustainable solutions, to face new arenas such as the energy transition and the hydrogen economy, establishing itself globally as an innovative partner for next generation environmental technologies. We wish the De Nora family, the CEO Paolo Dellachà and to all management every success in their new partnership with Snam, in view of the next phase of development of the company “.