Claudio Sposito, founder and chief executive officer of  the biggest Italian private equity firm, Clessidra sgr, has died at the age of 60. Mr. Sposito passed away the night between 11 and 12 January due to an aggressive leukemia which did not leave him a chance.

Mr. Sposito founded Clessidra in 2003, just after having left its role as ceo of Fininvest, the holding company of former Italian Minsiter Silvio Berlusconi’s group. Previously the manager has been serving for 10 years as a managing director for Morgan Stanley, head of Italian investment banking activities.

In a few days Clessidra’s board of directors will meet in order to draw the new governance of the private equity firm, MF Milano Finanza writes today. Clessidra sgr today manages three Clessidra Capital Partners funds. The first two funds (CCP e CCPI II) raised about 2 billion euros, while the firm is in advanced fundraising for its third fund (CCP III) with a 1-1.1 billion euros target, the same of CCP II, after its size was reduced from the initial committement of 1.4 billion (see here a previous post by BeBeez).

This was because the CCP II fund  in Spring 2014 had invested just less than half its total committed capital and the investment period was close to finish. Investors were happy to say ok at that time as the fund had just announced a rich exit from Cerved Group, a leading business information provider in Italy. It was sold to CVC Capital Partners from Clessidra and Bain Capital in January 2013 and Clessidra took back 200 millions out of 70 millions invested in 2010.

Clessidra sgr’s fund had closed 21 investments and count 7 companies in their portfolio up today. The firm can show its investors an enviable track record with a 35% Irr for the second fund and an over 50% for the first one, even if that one had some problematic partecipations in its portfolio such as the ones in F.lli Elia, Moby e Giochi Preziosi, 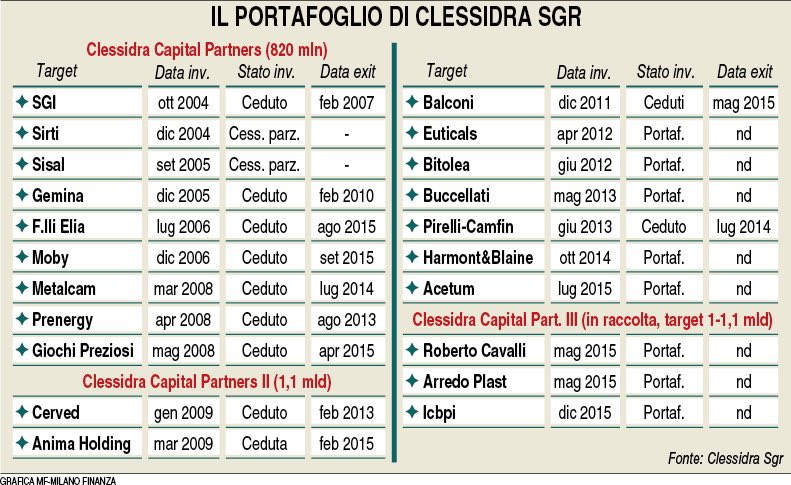 Clessidra was not a one man show even if Mr. Sposito was certainly the frontman. Members of the board of directors are: the head of the investement team, Maurizio Bottinelli; the vice executive chairman and operating partner, Francesco Trapani (former ceo of Bulgari group);  senior advisor, Giuseppe Turri; and partners Riccardo Bruno and Manuel Catalano.

Other partners who are not board members are Marco Carotenuto, Simone Cucchetti, Alessandro Papetti and Matteo Ricatti, while other operating partners are Ugo Belardi, Giorgio Casnati and Rocco Sabelli (former ceo of Alitalia).

Clessidra sgr’s team had been reorganized in June 2014  era stata riorganizzata e rinnovata nel giugno 2014 (see here a previous post by BeBeez), just before the official launch of the fundraising campaign for the third fund. After senior partner Alessandro Grimaldi left at the end of 2013 (now he is launching a new private equity firm, Armonia sgr, see here a previous post by BeBeez),  Giuseppe Turri left the partnership choosing to remain as a board member and a senior advisor. For two left senior partners, two new young partners had been appointed: Simone Cucchetti and Marco Carotenuto. Previously, in April 2014 Francesco Trapani  had joined the team as an operating partner.

Aksìa to buy Contacta and Visiant Contact, while raising 108 mln euros for its IV fund