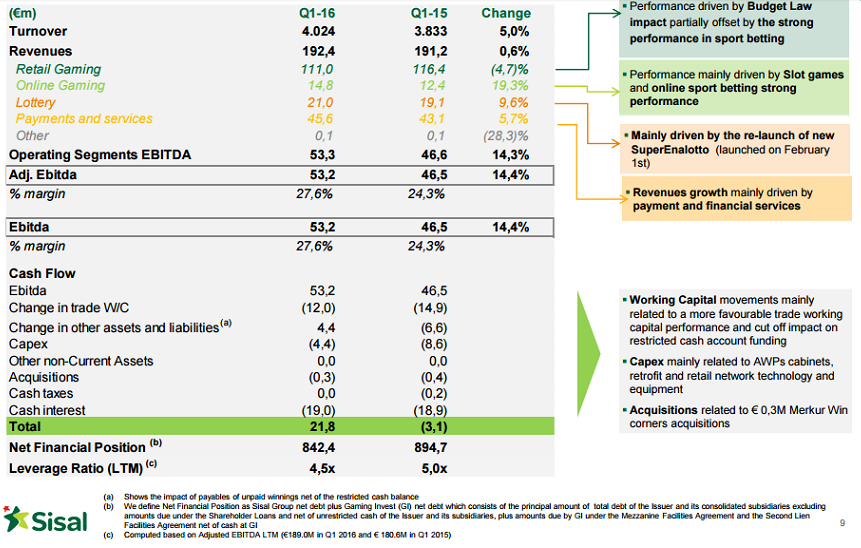 With a one billion euros offer, CVC Capital Partners won auction for control of Italy’s bet and payment services Sisal Group spa, which has been controlled by funds managed by Apax (36.5%), Permira (36.5%) and Clessidra (20%) since 2006.  The announcement came yesterday morning  and the closing of the deal is expected by next September (see here the press release).

CVC, led in Italy by Giampiero Mazza, has a strong track record in the gaming industry through its strategic investments in Sky Bet (UK), Tipico (Germany) as well as its previous investment in William Hill.

Giancarlo Aliberti, partner at Apax Partners, Roberto Biondi, partner at Permira and Simone Cucchetti, partner at Clessidra, said: “Under the ownership of the Apax, Permira and Clessidra funds, Sisal was transformed from a lottery player into a retail conglomerate diversified across payment services, online, video lotteries, sport betting and lotteries. Over this period, profitability more than doubled and the company successfully increased market share in its verticals”.

Founded in 1946, Sisal was the first Italian company to operate in the gaming sector as a Government Licensee. Through its capillary network of 45,000 points of sale, the company offers the public in excess of 500 payment services. Sisal employs about 2000 people.

The 2006’s deal had been conducted on a 1.12 billion euros enterprise value basis (see here Private Equity Monitor) or 14.8x 2005’s ebitda which had been 81,8 million euros after 197 millions in revenues.

CVC was advised by Morgan Stanley, M&A, Bain and Company and AT Kearney on Commercial DD, PwC on Transaction Support, Latham and Watkins on Legal and Facchini Rossi e Soci on Tax, while the sellers were advised by Deutsche Bank, UBS, Legance, Maisto e Associati and PricewaterhouseCoopers. Morgan Stanley, Credit Suisse and Unicredit provided committed debt financing to support the transaction.