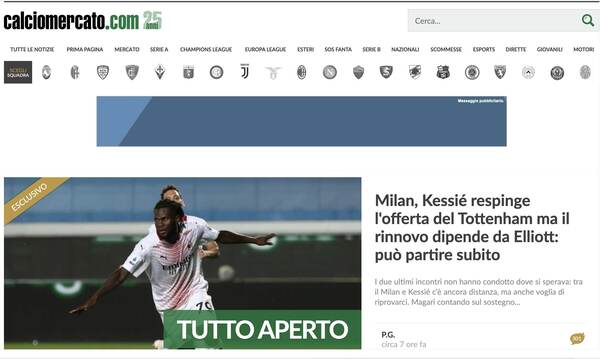 The Italian football news website Calciomercato.com will come under the control of Footballco, a platform specialized in football news sites owned by Integrated Media Company, an investment platform dedicated to digital media, in turn controlled by the US private equity giant TPG Capital. The Financial Times. wrote yesterday.

Footballco is the same company that in September 2020 bought the majority stake in the international football news site Goal.com from Dazn for 125 million dollars, a few months after Dazn combined Goal.com’s businesses with Spox’s and Voetbalzone, respectively the main football news portals of Germany and the Netherlands (see here the press release of the time).

According to rumors, the acquisition of Calcioinfinito srl, the company that owns Calciomercato.com, managed by the financial advisor Vitale & Co and the legal advisor WhIte & Case, is worth 10 million dollars and the agreement also includes the sale of Ilbianconero.com, a site created four years ago dedicated to Juventus soccer team fans. Selling their stakes of Calciomercato.com are the founder Carlo Pallavicino, owner of about 80% of the capital, and the current ceo Cosimo Baldini, who owns the remaining 20%. Both will remain as managers of the company for the next three years, as will the current editor in chief of Calciomercato.com, Stefano Agresti.

Calcioinfinito srl closed the 2020 financial statements with a production value of 2.25 million euros, net revenues of 2.09 million, an ebitda of just over 400k euros and net liquidity of over one million (see here Leanus analysis, after registering for free). Over the last year, the site has consolidated its activity with an average of about 12 million monthly users, which will add to the 400 million monthly users of the Footballco platforms already present in 17 markets. For the current year Footballco expects to reach 100 million euros in revenues.

Juan Delgado, ceo of Footballco, told the FT that the acquisition of CalcioMercato.com makes Footballco the leading football platform in Italy by expanding its European presence in the largest digital football advertising market in the world. Footballco, which has more than 300 employees and will add 20 with CalcioMercato.com, plans to expand to other geographies through acquisitions of existing platforms and organic investments in markets such as Spain and France.