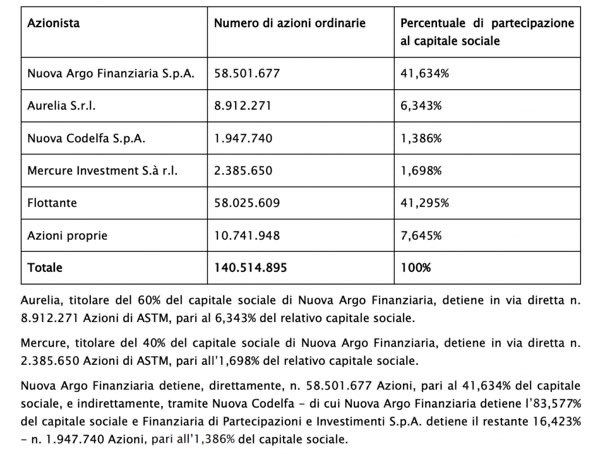 The Gavio family and Ardian infrastructure funds unexpectedly announced on the evening of Saturday 20 February the launch of a voluntary takeover bid on the shares of the subsidiary ASTM, an industrial holding listed on the Italian Stock Exchange, active in the management of motorway networks under concession, in the design and construction of large infrastructural works and in the sector of technology applied to transport mobility.

The aim of the takeover bid, launched at a price of 25.6 euros per share compared to 20.1 euros at the close of Friday 19 February, is the delisting (see the press release here).

More in detail, the ASTM note explains that “through the offer and the delisting, the offeror intends to make possible a reorganization of the issuer aimed at further strengthening, an operation more easily prosecuted in the unlisted status”.

Technically, the NAF 2 spa vehicle, 100% owned by Nuova Argo Finanziaria spa, in turn 60% controlled by Aurelia srl ​​(Gavio group) and 40% by Mercure Investment sarl (wholly owned by Mercure Holding Sca, in its turn controlled by the Ardian Infrastructure IV fund), will launch a voluntary takeover bid aimed at acquiring all the ordinary shares of ASTM with the exception of those held directly and indirectly by Nuova Argo Finanziaria (43.02% of STM capital); of those held by Mercure Investment sarl (1.698%); and ASTM own shares (7.645%).

The takeover bid will therefore concern a total of approximately 66.9 million shares, representing 47.638% of the share capital of ASTM, for a total maximum consideration of over 1.7 billion euros. As for Aurelia, it has already undertaken to bring all the ASTM shares directly in its possession to the takeover bid (equal to 6.34% of the capital).

The offer will be financed 100% by JPMorgan Chase Bank, which has also committed to refinance ASTM’s existing debt, if necessary, which at the end of September 2020 had fallen to 595 million euros from 849 millions at the end of June (see the press release here). JPMorgan Securities is sole financial advisor of the transaction, JPMorgan AG is sole arranger and bookrunner and Chiomenti is legal advisor.

We recall that last September 2020 Ardian, again through Mercure Investment sarl, had acquired 1.6% of the capital of ASTM. The acquisition took place through a reverse accelerated bookbuiding, at the price of 21 euros per share, for a total value 47.5 million euros (see a previous article by BeBeez).

A few months earlier, in July 2020, the Genoese private equity operator Yarpa, through its subsidiary Yarpa Special Opportunities, bought from Ardian a stake in Mercure Holding, the parent company of Mercure Investment (see here a previous article by BeBeez).

The Gavio family, through the holding Aurelia srl, had signed a non-binding Memorandum of Understanding with Ardian Infrastructure in April 2018 to develop a strategic partnership aimed at strengthening the ASTM / SIAS Group (see a previous article by BeBeez). The goal of the partnership is to further international expansion of the group, enabling it to seize the great opportunities of the market in Europe, Latin America and the United States. The agreement was then definitively signed in the following August (see the press release of the time here). Ardian thus bought 40% of Nuova Argo Finanziaria spa, a company that then held 58.56% of ASTM spa, which in turn held 63.41% of SIAS. Since the beginning of 2020 ASTM has incorporated SIAS and now Nuova Argo Finanziaria holds, directly and indirectly, 43.02% of ASTM.

In the concessions sector, ASTM, also through the Brazilian co-subsidiary EcoRodovias  (see a previous article by BeBeez), is the second largest motorway operator in the world with a network of approximately 4,600 km of network managed in Italy, Brazil and the United Kingdom. In the design and construction of large infrastructure works, Astm operates through Sina, the Group’s engineering company and through Itinera, a global player in the construction of transport infrastructures (roads, highways, railways, subways, bridges, viaducts, tunnels) civil and industrial construction projects (hospitals, large malls, airports). Among the reference markets, Itinera is present in the United States through Halmar International, one of the leading companies in the New York metropolitan area in the construction of transport infrastructures. In the technology sector, ASTM is present through Sinelec spa, a company specializing in the design, construction and management of advanced security, info-mobility and toll collection systems.

ASTM, based in Turin, closed the first half of 2020 with revenues of 860 million, an ebitda of 185.5 million, a net profit of 33.7 million and a net financial position of 503.5 million (see here press release). For this year, the company expects stable aggregate revenues, a profit growth of over 35%, a decrease in net debt of more than 40% compared to 2019 and a 30% increase in investments on the network.