EI Towers, the company owned by F2i sgr which in turn owns the TV transmission towers of Mediaset and was delisted from Piazza Affari in 2018 after a tender offer launched by F2i and Mediaset itself (see here a previous article by BeBeez), is evaluating with the advisor Nomura the sale of its subsidiary Towertel. The latter holds the pylons on which the infrastructures for transmitting the telephone signal are housed. Il Sole 24 Ore writes that Cellnex Telecom, the group owning tlc towers listed in Spain and controlled by the Benetton family through their holdings Sintonia and Edizione, is among potential investors.

Nomura, however, can enjoy the experience in the sector of the senior advisor for Europe, Marco Patuano, former ceo of Edizione and before Tim (see here a previous article by BeBeez).

Based on EI Towers’ 2018 consolidated financial statements, Towertel generated revenues of 42 million euros in 2018, with an operating result of 15 million euros. The equity investment in Towertel, equal to 100% of the share capital, is indicated in the EI Towers balance sheet at 94.45 million euros at the end of 2018. 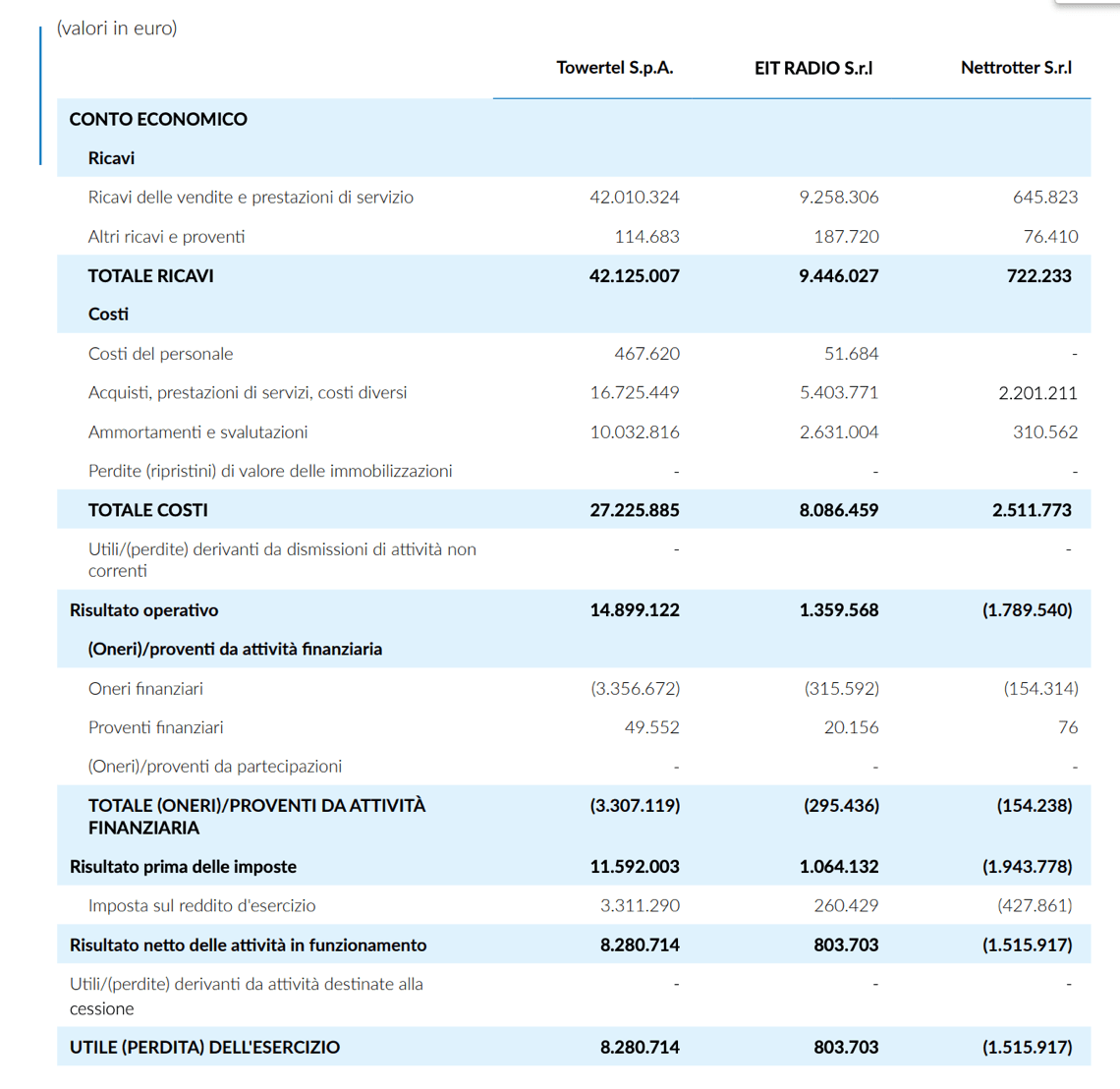 Also at the end of 2018 EiTowers had credits versus Towertel for 140 millions.

EiTowers is 60% controlled by F2i TLC 1 spa, wholly owned by the Third F2i Fund, and the remaining 40% by Mediaset. Last year, F2i and EI Towers acquired Persidera, the Italian leader in digital terrestrial television signal transmission networks, sold by Tim and Gedi for an enterprise value of 240 million euros (see here a previous article by BeBeez). Persidera has been split into a NetCo companies, in which Persidera’s compendium of infrastructures for radio and television broadcasting on terrestrial frequencies was transferred, and a MuxCo company, which holds purely intangible assets (rights of use for frequencies) and certain network assets and will manage commercial relations with television publishers (audiovisual media service providers). All MuxCo shares were acquired by a company specifically set up by F2i TLC 1 spa, while 100% of the NetCo company was acquired by EI Towers.

Nomura is also engaged alongside the consortium led by the private equity fund Ardian Infrastructure and participated by Canson Capital Partners, which since last May has been exclusively negotiating an alliance with Tim in Inwit,  the company that owns Tim’s mobile phone towers, which at the end of March 2020 merged with Vodafone Towers srl, the company that owns Vodafone‘s mobile phone towers (see here a previous article by BeBeez). In the background, as a rumor that has been recurring for years, is the possible merger of EI Towers with RaiWay, an operation attempted in 2017, but which ran aground on the vetoes of the Renzi Government and the Italian public tv broadcaster Rai, which could now become popular again.