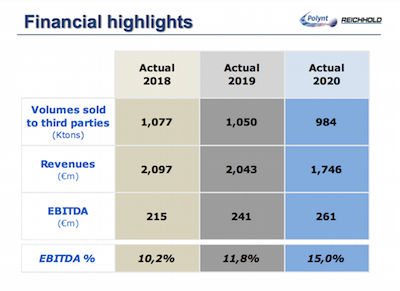 Investindustrial announced on Friday 2 July that it will exit the joint venture with US private equity firm Black Diamond Capital Management with which it had created the Polynt-Reichold group, one of the leading manufacturers of coating and composite resins, as well as a global operator of specialized chemicals with a significant presence in Europe and North America (see Investindustrial’s press release here and Black Diamond’s here).

The operation will see Investindustrial to sell its 50% of the group, based on an enterprise value of 2.6 billion euros (see Reuters here), that is 10x the 2020 ebitda which was 261 million euros (up from 241 millions in 2019) versus revenues down to 1.74 billion euros (from 2 billions) and net financial debt of 317 millions (see the presentation to bondholders here).

More in detail, Global Chemicals sarl, a vehicle of the Investindustrial V fund, will sell to Polynt Reichhold itself its 50% stake in Specialty Chemicals International sarl, the holding company that controls 100% of Polynt Reichhold. Following the transaction, Black Diamond will then become the controlling shareholder of the company.

Polynt-Reichhold’s acquisition of Investindustrial’s shares in Specialty Chemicals, together with the refinancing of existing debt, will be financed with approximately 1.3 billion euros of new secured and unsecured senior credit lines provided by JPMorgan and some funds managed by Apollo Capital Management, while Black Diamond in turn will invest a share of equity. 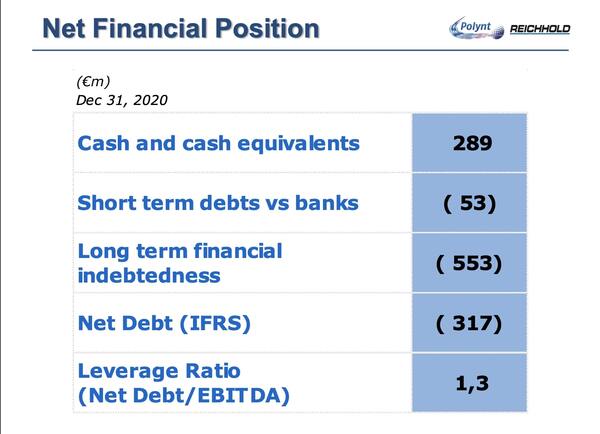 Polynt-Reichhold was born in 2017 following the merger between Polynt spa, a leading Italian company in the production of intermediate polymers and composite materials, controlled by Investindustrial since 2008 through Polimeri Speciali Holding spa, and Reichhold Industries. The latter was a US chemical group specializing in the production of resins, in turn controlled by a group of private equity funds led by Black Diamond Capital Management and which also included JP Morgan Investment Management, Third Avenue Management and Simplon Partners. The latter funds had invested in Reichold’s senior bonds which then defaulted in 2014 and had therefore taken control of the group by converting their credit into equity, supporting the relaunch of the business (see here a previous article by BeBeez). Today Polynt-Reichhold operates 41 factories around the world and has a strong presence in Europe and North America.

Given the structure of the transaction, with Polynt-Reichold thus holding a substantial package of shares in its holding, one can imagine that Black Diamond is mulling a subsequent future merger transaction.

Investindustrial and Black Diamond had started an auction to sell Polynt-Reichhold last February (see here a previous article by BeBeez), but the operation had been in the air since last October, when it was said that the shareholder funds would start the process of sales at the beginning of 2021 on the basis of a valuation of 1.5-2 billion euros (see here a previous article by BeBeez). The valuation that circulated last February was already 2.5 billions. Potential stakeholders were rumored to include strategic groups such as Eastman Chemical Company and Lanxess and large international private equity funds such as Cinven, Lone Star and Apollo Global Management.

We recall that in the same sector at the beginning of February Bain Capital and Cinven won the auction for the Specialty Ingredients division of the listed Swiss chemical group Lonza AG, for 4.2 billion Swiss francs (see here the press release of the time), well beyond the valuations circulating last October 2020 of 3-3.5 billion Swiss francs, based on a multiple of 10-12 times the expected ebitda for 2020, around 300 million francs (see here a previous article by BeBeez). The final battle for Lonza Specialty Ingredients was between the consortium of the two funds and Germany’s Lanxess. In any case, the participants in the auction for the Lonza division could now be interested in buying Polynt-Reichhold or the Bain Capital and Cinven themselves could imagine an aggregation with the newly acquired Lonza division.

Also in the chemical sector, in September 2020 Investindustrial and Black Diamond had jointly acquired Hexion PSR, a company active on a global scale in the production of special phenolic resins, engineering thermosetting molding compounds and formaldehyde, and boasts a strong positioning in both Europe and North America. Selling is the Wall Street-listed Hexion Inc. The company changed hands for 425 million dollars (see here a previous article by BeBeez).

Apollo signs deal for a 67% stake in Reno De Medici and prepares tender offer at 1.45 euro per share aiming at delisting the paper company