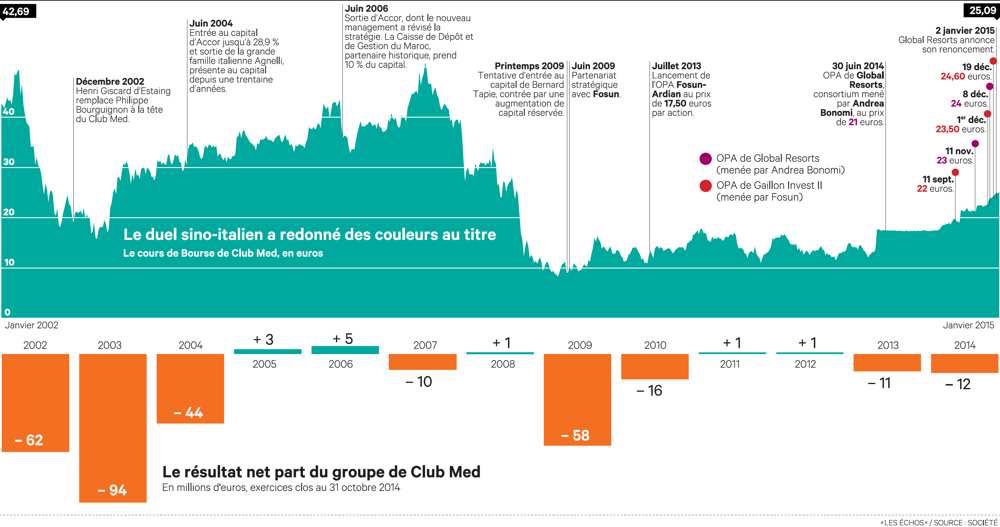 Stock market war for the control of  Club Mediterranée, ended last January 2nd but a legal battle might be around the corner.

Global Resorts, the investment veichle controlled by the Italian private equity operator Investindustrial, acutally announced that it would not make a new higher bid for the French touristic group allowing then Chinese conglomerate Fosun International to go on with its own bid at 24.60 euro per share (see a previous post by BeBeez).

Deadline for a relaunch was yesterday and the French supervisory authority on financial markets (AMF) announced on January 5th that an official calendar for takeover by GallionInvest II (the investment veichle controlled by Fosun) bid will follow (download here AMF’s statement).

In the meantime on January 6th French daily newspaper Le Monde wrote that lawyers by Andrea Bonomi, Investindustrial’s principal partne, sent to Paris Court press articles and  editorials that had been published by the French press in the last few weeks which might have manipulated the market as they reported opinions by a false market analyst.  Sources close to Global Resorts however said that “Global Resorts did not made any move with the Court at the moment and is not going to do any on the basis of what has been discovered till now”. The whole story has been told by  Journal du Net,

Andrea Bonomi gained just 5 to 10 million euros from the whole battle for Club Med,  MF-Milano Finanza wrote yesterday. Acutally BI-Invest, the holding company controlled by the Bonomi family which in turn owns the investment veichle Strategic Holdings, will cash in just  more than 20 million euros giving to Gallion Invest II its 10% stake of Club Med’s capital, as it bought its share at an average price of less than 19 euro per share. However, from this figure you need to subtract advisory fees for a total of almost 20 millions.

These figures do not take in consideration a capital gain from the sale of 3.2 million shares which Global Resorts acquired last November from Tyrus Capital Sam and Boussard&Gavaudan funds for 23 euro per share. That deal allowed Global Resorts together with Strategic Holdings to reach a 18.9% stake in Club Med’s capital or 6.79 million shares. However agreements with the two fund managers provided that in case of an increased offer by Global Resorts, or in case of a competing offer or an increased offer by a third party bidder, Global Resorts will pay to the funds the difference, per share, between the price of the increased or competing bid and 23 euros (see a prevoius post by BeBeez).

Bonomi will have the time to work better on the Carige project. For months actually rumors have been that Investindustrial might be the white knight who will save the Genoa-based struggling bank and in the last fwe days the stock market is more and more convinced that this will be the case. However Bonomi will intervene only in agreement with Fondazione Carige.