ION Investment raises price for its takeover bid on Cerved to 10,20 euro per share. New deadline is Sept 9th

ION Investment Group, the investment holding company of Andrea Pignataro, the Singapore sovereign fund GIC and Italy’s FSI fund  (in turn a 9% shareholder of ION after the sale of its stake in Cedacri to the latter, (see a previous article by BeBeez) have decided to put their hands on the portfolio by raising the price of their takeover bid launched through their Castor BidCo vehicle on Italy’s credit information and credit management group Cerved, listed on the Italian Stock Exchange. So the price was raised from 9.50 to 10.20 euros per share and at the same time  the term of the offer was postponed from 31 August to 9 September and the minimum threshold for the success of the offer was also raised from 50% + 1 share to 80% (see the press release here).

Castor BidCo also amended the loan agreement with the original lending banks, in order to increase the maximum amount of the credit line in support of the takeover bid from 1.65 to 1.68 billion, while the maximum use of equity will be equal to 970 millions.

We remind you that the takeover bid on Cerved was promoted by Castor srl, a company controlled by the Irish Castor Bidco Holdings Ltd, in turn wholly owned by FermIon Investment Group, an Irish company in which ION Capital Partners holds 85.75%. and by GIC Private Limited for 10%. The remaining 4.25% of Castor is in the hands of institutional investors. Furthermore, on 7 March last, FSI signed an agreement with Ion for which FSI undertakes to subscribe, against the payment of 150 million, a financial instrument issued by Castor Bidco Holdings Limited, redeemable or convertible into special category shares of Castor itself. Bidco Holdings.

Cerved’s Board of Directors had returned ION’s offer to the sender both for the too low price and because the latter precluded the shareholders “from accessing the expected benefits of the possible sale of Cerved Credit Management Group srl “, not reflected in the amount of the consideration. Moreover, the EV/ebitda multiples expected for 2021 and 2022 implicit in the valorization of Cerved Group on the basis of the initial consideration offered were only 11.1x and 10.5x, respectively, i.e. much lower levels than those of the comparable groups, on average 20.5x and 18.3x the ebitda “These multiples incorporate a discount, respectively, of approximately 46% and 43% compared to the average of the companies operating in the Data Intelligence sector (6) and do not recognize any premium for control” reports the board of directors (see here the press release of the Cerved board of directors of last July 15). 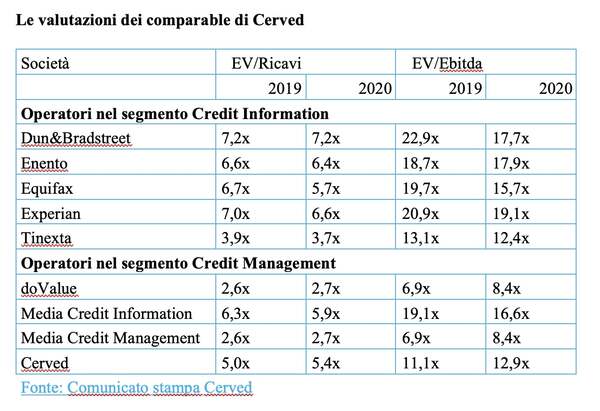 But more than the no from the board of directors, what convinced Castor BidCo to make the offer more attractive was the welcome given by the market so far rather cold. As at 25 August, no more than 11,776 requests had been received, ie just over 0.13% of the shares subject to the offer.

The increased consideration of the takeover bid incorporates a premium equal to 44.9% compared to the official price of the shares on the date of March 5, 2021, the trading day prior to March 8, 2021, the date of announcement of the offer; and 53.6% with respect to the weighted arithmetic average of the official prices recorded by the shares in the 12 months prior to the announcement of the takeover bid. In the event that all the shares are tendered, the maximum outlay will be just under 2 billion euros (see the press release here). Will all this be enough to convince the reluctant shareholders? It is still to be seen.

It should not be forgotten that in 2020 Cerved experienced a contraction in revenues of more than 6%, and of almost 14% as regards the ebitda. However, in 2021 the group is regaining the positions of 2019. The first half of the year in fact closed with revenues of 252 million euros, 6% more than in the same period of 2020. The growth of the ebitda is even more decisive , + 6.3% to 106 (see here the Interim Report for the first half of 2021). In essence, both the current financials and the stock market price, as well as the original takeover bid price, reflect the pre-pandemic business levels (the stock was quoted at 9.68 euros on February 17, 2020).

Last Friday the Cerved stock closed the stock market session at 9.95 euros, as if to say that the market had already partly discounted a raise in the price of the takeover bid. We recall however that a price per share in line with the estimates of the board of Cerved and its advisors (including Mediobanca and Morgan Stanley), would be around 13.5 euros.

As for ION Investment, it is a global technology provider serving the financial sector, founded more than 20 years ago by Italian entrepreneur and former City trader Andrea Pignataro. Last June the group announced the entry into the capital of illimity Bank (see a previous article by BeBeez). The related reserved capital increase, for a maximum value of 57.5 million and corresponding to 7.3% of the new share capital, was unanimously approved by the bank led by Corrado Passera at the end of July (see here a previous article by BeBeez) . illimity was therefore valued (equity value) about 870 million euros in the transaction, a value in any case higher than the market capitalization at the beginning of June.

We recall that on 3 June last lON had signed the closing of the acquisition of the entire capital of Cedacri, the group specialized in the outsourcing of IT and back office services to banks of which the FSI fund, led by Maurizio Tamagnini, owned the 27.1% while the rest belonged to a number of banks. An operation that valued Cedacri 1.5 billion euros and following which FSI reinvested in 9% of the same ION (see a previous article by BeBeez). The acquisition of Cedacri by ION was financed in part with a senior secured bond of  650 million euros issued by the parent company Cedacri Mergerco spa maturing in 2028, which was priced at par at the end of May (see a previous article by BeBeez).