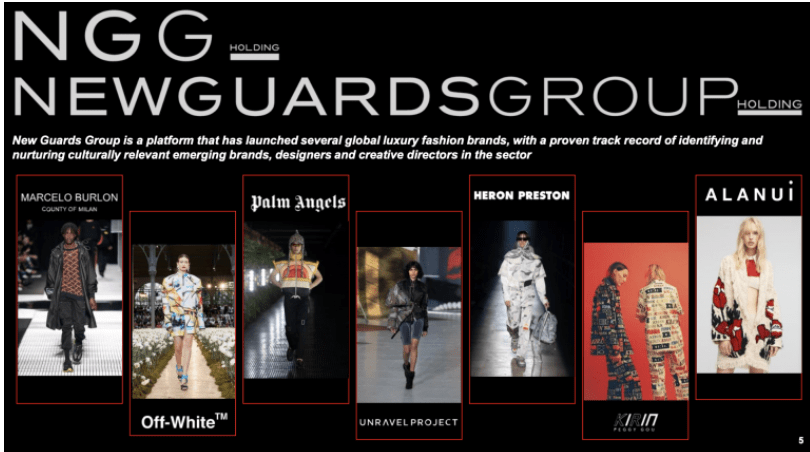 Farfetch Limited, a New York-listed luxury fashion tech, acquired Italy’s New Guards Group, a platform for the design, production and sale of high-end brands (see here a previous post by BeBeez). NGG founders Marcelo Burlon (7%), Claudio Antonioli(46.5%), and Davide De Giglio (46.5%) sold their stakes and became Farfetch shareholders. Farfetch acquired NNG on the ground of an enterprise value of 675 million dollars (608 million euros or 10x ebitda), and evenly paid the amount in cash and shares. De Giglio will be the chairman and ceo of NNG. NNG has sales in the region of 300 million euros, an ebitda of 60 million, and net cash of 70 million.

US fund Elliott poured 120 million euros in its Italian asset Credito Fondiario (see here a previous post by BeBeez). This capital increase financed the acquisition of a 7.4 billion NPLs portfolio that CF acquired from Banco Bpm and 70% of the platform for the management of distressed credits. Iacopo De Francisco is the coo of CF.

The Trevisani Family, the main shareholder of  Milan listed engineering group Trevifin, may reach an agreement for the company’s recapitalization and debt restructuring with the the other shareholders and the management  (see here a previous post by BeBeez). Trevi has sales of 618.1 million euros, an ebitda of 50.1 million, and a net financial debt of 692.6 million.

Italian former footballer Gianluca Vialli, Alex Knaster (the founder of private equity Pamplona), and Jamie Dinan (the founder of York Capital) are holding exclusive talks for buying Italian football team Sampdoria Calcio from Massimo Ferrero, the chairman and owner of the club (See here a previous post by BeBeez). The parties signed a letter of intents on 22 August. Exclusive negotiations will last until September. Sampdoria has profits of 9.29 million euros.

Italian private equity Ambienta acquired a controlling stake in Amutec, a producer of eco-friendly welding torches (see here a previous post by BeBeez). Luciano Conti founded Amutec in 1996. The company has sales of 18.3 million euros, an ebitda of 10.1 million and net cash of 8.3 million.

Milan listed ICT firm Exprivia paid 300k euros for a 20% stake of Italian Artificial Intelligence company QuestIT, which was born in 2007 as a  spin-off of the IA group of the Information Engineering Department of the Siena University (see here a previous post by BeBeez). Exprivia also signed a call option for acquiring a further 10% of QuestIT within 24 months of the closing. In 1H19, Exprivia generated sales of 251.6 million (286.9 million in 1H18), an ebitda of 10.4 million (8 million), and net financial debt of 249 million (214.6 million at the end of 2018)

Germany’s Incom New Energy sold a 7 MW power photovoltaic plant based in Apulia to a pool of undisclosed international investors (see here a previous post by BeBeez). INE did not provide further details.