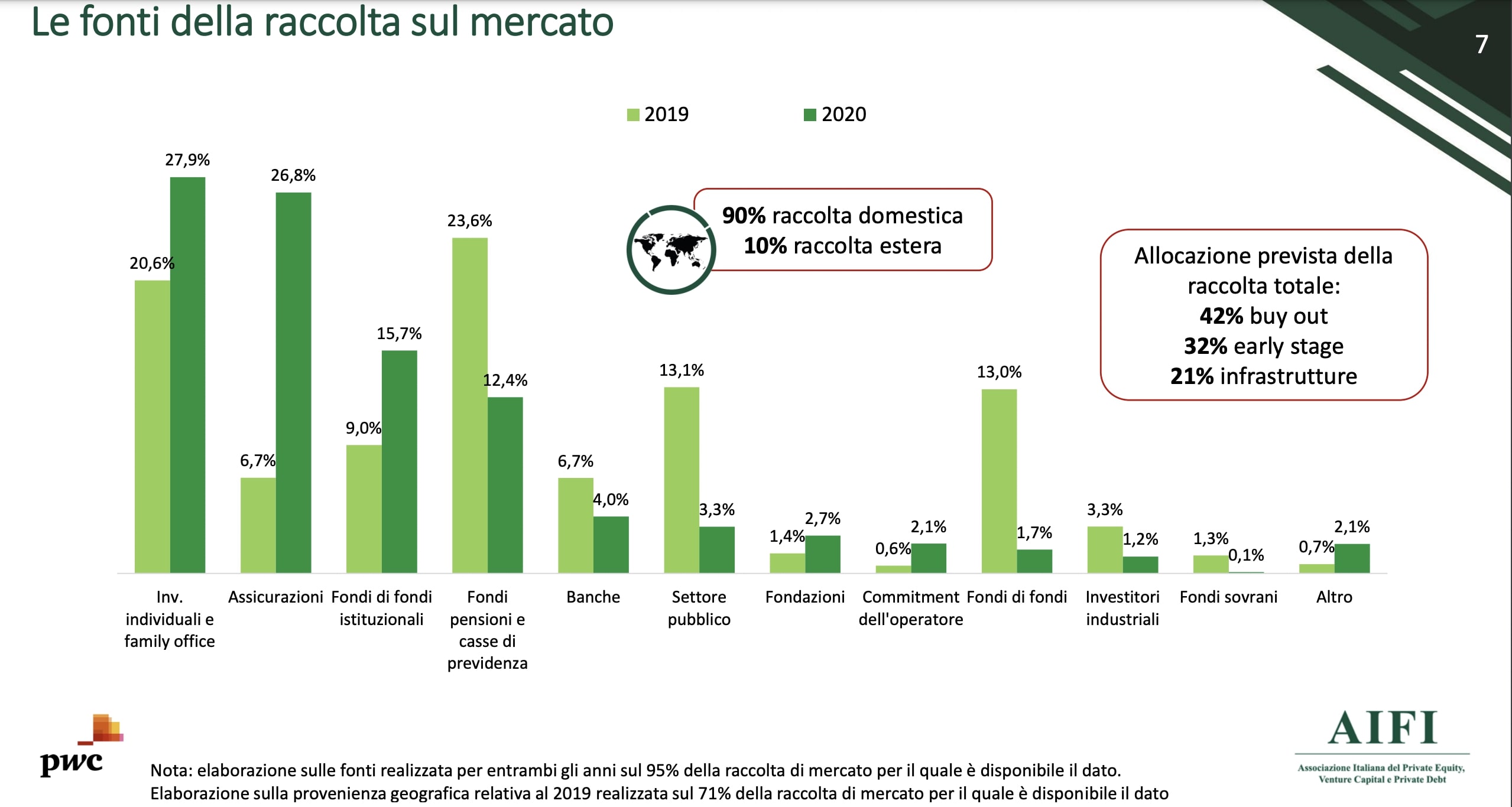 Year 2020 was not a particularly exciting period for the Italian private equity and venture capital sector in Italy terms of invested capital, fund raising and divestment value, while on the business front, i.e. the number of transactions , the funds have worked hard, much more than in 2019. This is the picture that emerges from the annual report of AIFI, the Italian Association of Private Equity, Venture Capital and Private Debt, in collaboration with PwC, which was published a few days ago (see here a previous post by BeBeez). In detail, fundraising increased by 64% to 2.6 billion euros from 1.59 billions in 2019, which had however been the year of negative record on the fundraising front since 2016. Moreover, foreign investors almost completely disappeared last year. In fact, in 2020, committements from foreign investors represented only about 10% of the total versus an average of about 50% in previous years. As for funding sources, fundraising in 2020 was mainly driven by family offices and private investors who alone accounted for 27.9% of all fundraising sources from 20.6% in 2019. Italian funds raised far less than French competitors which attracted 23.5 billion and German players in which investors poured 3.9 billion.  As for investments, they fell by 9% in 2020 to 6.6 billion euros from 7.2 billions in 2019, a figure which had fallen already from the record of 9.8 billions in 2018. By contrast, the number of transactions grew by 27% to 471, compared to 370 in the previous year, in 341 companies, driven by venture capital activity. On the divestment front, on the other hand, in 2020 the amount, calculated at the purchase cost of the equity investments, was 1.59 billions, down by 28% compared to the 2.2 billions in 2019. The number of exits was 81, down 39% compared to 2019, when it stood at 132.  The growth trend identified by the data of Aifi and PwC Deals in terms of number of transactions is in line with that already highlighted by BeBeez Private Data which, after the stop from lockdown, recorded a great recovery of activity at the turn of the Summer. Thus, private equity investors alone (i.e. without counting venture capital investors) have announced transactions involving 360 companies, considering private equity in a broad sense and therefore not only the transactions conducted by the funds, but also those conducted by their subsidiaries (add- on), from investment holding companies, Spac and club deals and divestments (see here the Private Equity Report for 2020 by BeBeez , available for BeBeez News Premium subscribers). To these operations, other 306 must be added if we consider venture capital  deals (see here the Venture Capital Report of BeBeez for 2020 (available to the subscribers of BeBeez News Premium).

Italy’s football team Inter attracted the interest of an undisclosed US-based Spac that is completing its fundraising (see here a previous post by BeBeez). Market observer speculated that Inter could be of interest to Trinity Acquisition Corp, a Spac whose sponsor is LionRock, a Hong Kong – based private equity that owns 31% of the team and that is currently raising 250 million US Dollars.

Seci, the holding company of the Maccaferri Family, attracted a 200 million offer from Apollo Global Management (AGM), sources said to BeBeez (see here a previous post by BeBeez). The deal has been structured by Apeiron Management, Apollo’s exclusive investment arm in Italy, who filed this bid with Bologna Court little ahead of 23 March, the deadline for accepting the receivership proposal that the company drafted on the ground of expected cash flows out of the future sale of assets. Bologna Court deferred the deadline to 18 May, Tuesday.

Gruppo Rino Snaidero, the Italian producer of high-end kitchen, sold its German subsidiaries and brands Rational, Regina and Mahlzeit by Rational (see here a previous post by BeBeez). Rational has sales in the region of 18 million euros. In July 2018, Dea Corporate Credit Recovery poured 25 million in Snaidero and acquired a 72.6% stake in the company that received a Court approval for restructuring its debt. The Snaidero Family owns 15% of the company, whole AMCO has 12.4%.

HMSHost, a subsidiary of Milan-listed Autogrill, fetched 375 million US Dollars out of the sales of its US-based motorway restaurants to Blackstone Infrastructure Partners, Applegreen Limited and B&J Holdings (See here a previous post by BeBeez). Vendors may receive a further earn-out payment on the ground of the target’s turnover for 2022 and 2023.

Quinta Capital fetched 19 million euros (with a capital gain of 8.5 million) out of the sale of 23 telephone exchanges based in the Centre and North of Italy that are leased byTIM  (see here a previous post by BeBeez). Luca Turco is the cofounder and ceo of Quinta Capital.

Red Circle Investments (RCI), the investment vehicle of Renzo Rosso, raised to 7.5% its stake in Milan-listed Masi Agricola, a wine producer (see here a previous post by BeBeez). In May 2020, RCI acquired 5% of Masi when at the same time Alcedo private equity firm sold its own 5% remaining stake. Earlier in February, Masi joined the 200 million basket bond programme of Cdp and Unicredit for the wine producers.

Andrea Macchione is the new managing director of Polo del Gusto, a sub-holding of Gruppo illy that owns Domori, Dammann Frères, Prestat, Agrimontana, and Mastrojanni (see here a previous post by BeBeez). Riccardo Illy heads Polo del Gusto. Macchione was the ceo of Domori and previously worked for Gruppo Eataly and Fontanafredda. Macchione’s appointment takes place in the context of the announced sale of a minority (20-40%) of the Polo del Gusto, valued at 250 million euros, which returned to heat last February.

Milan-listed software house Sesa acquired 63.1% of IFM Infomaster, 60% of Digital Storm from Valerio Lusiani and Giovanni Politi, and 51% of Tecnikè from Giuliano Piergentili (see here a previous post by BeBeez). Innovest, Emilio Barlocco, the ceo Marco Pezzini and the managers and minority owners sold their interest in IFM. Sesa subscribed a capital increase of 6 million euros and paid the targets in the region of 5X ebitda.  Sesa had been the first Italian company to list on the Italian Stock Exchange thanks to a business combination with a SPAC back in 2013.

GSA (Gruppo Servizi Associati) attracted the interest of FSI further to reported suitors  Investcorp, Alvarez & Marsal Private Equity and Chequers Capital (see here a previous post by BeBeez). The asset is worth 250-300 million and Mediobanca is running the auction together with Dc Advisory, part of Japan’s Daiwa Securities. Armonia private equity firm bought a 68.5% stake in GSA in January 2018. Alessandro Pedone (30% owner) is currently selling a 15% of the asset. Managers have 1.5% of GSA which has sales of above 130 million with an ebitda of 29 million.

Italian IT company Seco, a portfolio business of Fondo Italiano d’Investimento (FII), aims to launch its already announced ipo in 2Q21 (see here a previous post by BeBeez). The company will list a 35% through a placement with institutional investors. Daniele Conti and Luciano Secciani and their will sell part of their shares, while FII will agree a greenshoe option to IPO coordinators Goldman Sachs and Mediobanca for a publicly traded equity of 40% – 45%. Seco has sales of 76.1 million, an adjusted ebitda of 15,9 million and an adjusted ebitda of 11.4 million.

Italian IT company Engineering Ingegneria Informatica will pay dividends for 17 million euros to shareholders Bain Capital, NB Renaissance and NB Aurora (Neuberger Berman) (see here a previous post by BeBeez). The move is due to good FY 2020 results and in view of the payment date for the coupon for the high yield bond issued in late 2020 for 605 million euros This Luxembourg-listed senior secured bond is due to mature on 30 September 2026 and pays a 5.875% coupon. Engineering has a turnover of 1.27 billion, an ebitda of 160 million and net profits in the region of 44 million.

Dario Mirri, chairman and main owner of Italian football team Palermo Calcio, hired Lazard for finding new investors that would help him to boost the team’s turnover to 100 million euros sSee here a previous post by BeBeez). Antonio Di Piazza owns 40% of the team and may exit.

Sisal, an Italian gambling firm, joined the call for tender for managing UK’s National Lottery (see here a previous post by BeBeez). Francesco Durante is the ceo of Sisal. The company belongs to CVC Capital Partners since May 2016. In 3Q20, Sisal posted sales of 373.1 million euros, an adjusted ebitda of 123.9 million with a net financial debt of 308.6 million.