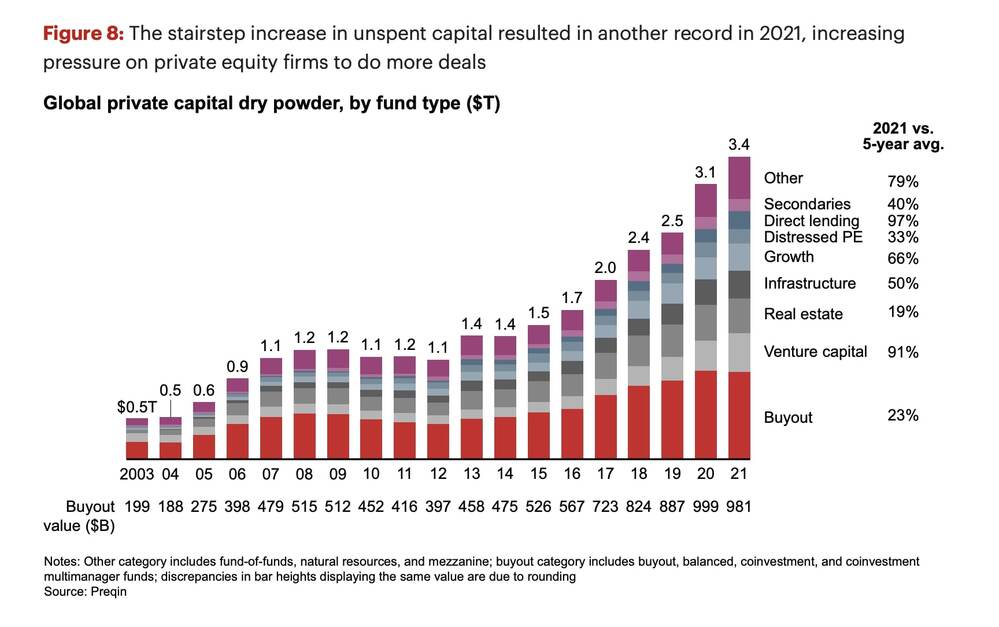 At the end of 2021, the dry powder of world private capital investors amounted to 3,4 trillion US Dollars, said a report of Bain&Company (see here a previous post by BeBeez). The dry powder was worth 3.300 trillion in 1H21 and 3.1 trillion at the end of 2020. As for Italy, see here the BeBeez Italian Private Equity Report for 2021 available for the subscribers to BeBeez News Premium and BeBeez Private Data. The report includes a thorough deals list

Private Equity funds are keen on taking private Milan-listed companies, while SMEs are increasingly keen on launching IPOs, said the Report Sliding Doors: listing and delisting on Milan Market (2002- 2021) of Intermonte and Milan Polytechnic (see here a previous post by BeBeez). In 2002 -2021, 448 firms launched an IPO while 336 delisted (107 in the last five years). However, the report pointed out that the delisting trend is global.

Italian media and publishing company GEDI (an Exor‘s portfolio company) agreed to sell Gruppo L’Espresso (GLE) and Le Guide de L’Espresso to Danilo Iervolino (see here a previous post by BeBeez). In December 2021, Mr. Iervolino acquired a controlling stake of Milan-listed Blue Financial Communication Media (BFC Media spa) ahead of a delisting. Since 2020, GEDI belongs to Milan-listed Exor (89.62%), Mercurio (5.19%) and Cir (5.19%). BFC Media has sales of above 16 million euros, an ebitda of more than 2.1 million and net cash of 1.6 million.

The Scudieri family acquired back from FSI a 28.1% of Italian automotive group Adler Group (see here a previous post by BeBeez). Rothschild assisted the buyers. Press reports said that the Scudieri family could finance such a transaction through a bond issuance or by signing a further partnership with Japan’s competitor Hayashi Telempu (HTC). In 2021, Adler and HTC launched Global Automotive Interior Alliance (GAIA). In 2018, FSI acquired a minority of Adler from Paolo Scudieri. The company has sales of 1.17 billion euros with an ebitda of 137.6 million and a net financial debt of 447.2 million.

Milan-listed Italmobiliare increased to 80% its stake in wine and spirits e-retailer Callmewine as it acquired a further 20% of the firm from Paolo Vittorio Zanetti (see here a previous post by BeBeez). The Pesenti Family is the controlling shahreolder of Italmobiliare who acquired a 60% of Callmewine in 2020 on the ground of an enterprise value of 17 million euros

Israeli’s Sharon Laboratories, a portfolio company of Tene Investment, acquired Res Pharma Industriale (RPI), an Italian producer of active ingredients for personal care and hygiene items, from the founder Agostino Facchini (see here a previous post by BeBeez). Sharon Laboratories is a provider of solutions for the preservation of cosmetic products and in 2017 sold a controlling stake to Tene Investment Funds. RPI has sales of 8.4 million euros with an ebitda in the region of 0.8 million.

Tungsten, a club deal of Cronos Capital Partners and other investors, acquired from Paolo Manfredi the majority of Lombardo, an Italian producer of components for outdoor lighting (see here a previous post by BeBeez). Crédit Agricole Italia financed the buyers. Manfredi, Italo Belussi (coo and currently 10% owner), Claudio Lussana (cfo – 6%),  Davide Bresciani (the plant manager), and the director Giovanni Maria Castelli will reinvest for a minority of Lombardo who aims to grow through M&A. The company has sales of 21 million euros.

Paper Board Alliance, the holding that owns Cartiera dell’Adda and Industria Cartaria Pieretti (ICP), acquired 70% Tecno Paper, an Italian producer of industrial machinery for the paper industry (see here a previous post by BeBeez). Claudio Ferrari and Paolo Baldaccini, the target’s foudners, will keep a 15% each. Tecno Paper has sales of 9.4 million euros, an ebitda of 0.4 million and a net debt of 2.5 million. PBA now has revenues of 130 million and aims to pursue a vertical and horizontal integration through M&A.

Procemsa, a food integrators producer that belongs to Investindustrial, is close to acquiring German competitor Aakamp (see here a previous post by BeBeez). Alexander Keibel will keep his role of ceo of Aakamp. Investindustrial acquired 70% of Procemsa in 2019. The Sertorio kept a 30% of the business. Investindustrial has assets under management fo 11 billion.

Tigrotto, the holding of BioStrada’s founder Alessandro Enginoli, acquired Taurus, an Italian producer of bicycles, from Protom (see here a previous post by BeBeez). Taurus has sales of 0.26 million euros.

GreenIT acquired from Gruppo Fortore Energia a portfolio of Italian onshore wind farms with a power of 110 MW (see here a previous post by BeBeez). GreenIT is a joint venture that Cdp Equity (49%) signed in March 2021 with Plenitude (51% – fka Eni Gas e Luce), a subsidiary of Milan-listed Eni, that is reportedly going to list on Milan market. Antonio Salandra is the chairman and controlling shareholder of Fortore Energia

Ideanomics, a Nasdaq-listed company, successfully concluded the public offer that launched on Milan-listed Energica Motor Company, an Italian producer of electric motorbikes whose delisting will start on 14 March, Monday (see here a previous post by BeBeez). Ideanomics paid 3.2 euros per share and acquired 45.48% of Energica Motors Company for 45 million euros and an equity value of target of little above 99 million. Ideanomics owns 93.63% of Energica and will carry on a squeeze out of the remaining 6.37% of Energic for 6.3 million.