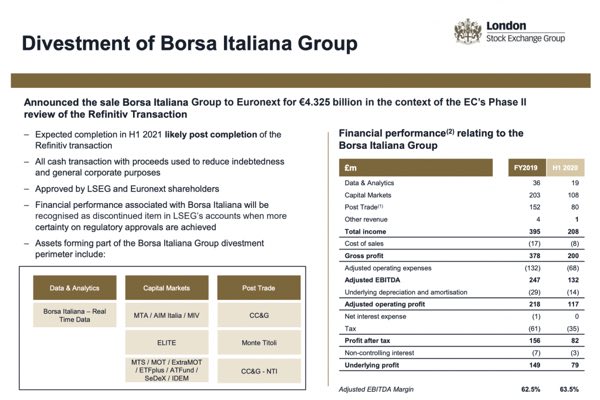 The European  Commission  has conditionally approved, under the EU Merger Regulation, the merger between the London  Stock  Exchange  Group (LSEG) and Refinitiv (see here a previous post by BeBeez). The transaction could complete shortly in 1Q2021. One of the reasons why EU Commission gave its go-ahead is the fact that LSEG had agreed to sell its 99.9% stake in Borsa Italiana to Euronext last October 2020 so not to overlap with Government bonds trading activities of Refinitiv otherwise creating a dominant position. Borsa Italiana is worth 4.325 billion euros or 16.7 X the adjusted ebitda. Borsa Italiana had a turnover of 395 million euros in 2019 and an adjusted ebitda of 247 millions. Euronext will acquire the Italian stock market and will invest its own cash (300 million euros) and a financing facility of 1.8 billion that Bank of America Merrill Lynch, Crédit Agricole Corporate and Investment Bank, HSBC France, and JPMorgan Securities provided. Cdp Equity and Intesa Sanpaolo will also invest 700 million euros in a reserved capital increase of Euronext, acquiring a 7.3% and 1.3% stake, respectively.

The public golden power rule will not affect the deal of Investindustrial on Milan-listed packaging company Guala Closures, which is a crucial step towards the launch of a tender offer aimed at the delisting of the company (see here a previous post by BeBeez). On 8 December 2020, Investindustrial signed a deal that was due to bring  its spv Special Packaging Solution Investment sarl (SPSI) to own a 45.8% of Guala and achieve 41% of voting rights ahead of the launch of a public offer at 8.2 euros per share. A first group of agreements concerned the purchase of 24.2% of the share capital  from a group of previous shareholders and the execution of those sales took place on 10 December 2020. Therefore, taking into account the shares already owned by SPSI following a previous takeover bid launched last Summer without success (equal to approximately 4% of the share capital), SPSI now already holds 28.2% of the share capital of Guala and 25.3% of the voting rights. The second group of agreements announced in December was signed by Investindustrial with three major shareholders of Guala, namely Alantra EQMC Asset Management SGIIC, Delfin sarl and Factor Holding srl. At the closing of all those transactions, SPSI will hold 45.8% of the share capital of Guala and will therefore launch the mandatory tender offer on the rest of the outstanding shares. Investindustrial previously said that it would not have launched the offer if the golden power affected the transaction. Investindustrial is now waiting for the antitrust approval and is looking to raise funds for repaying the bond of Guala or signing a waiver with the bondholders for the change of control. Other major shareholder in Guala Closures are activist fund Amber, Peninsula Capital and chairman Marco Giovannini (24.3%). The company has sales of 606.5 million euros and an adjusted ebitda of 113.5 million.

Predica Energies Durables, a vehicle of Crédit Agricole Assurance for investing in renewable energy, and CA Vita acquired from F2i 30% of EF Solare, an owner of photovoltaic plants (see here a previous post by BeBeez). Previous press rumours said that 30% of EF Solare was worth 600 million euros on the ground of an enterprise value of 2 billion.

Kyma Investment Partners, a private equity with a focus on the digital transformation, Andrea Rangone (chairman and co-founder of Digital 360) and Stefano Mainetti (the founder of Webscience and doDigital and executive advisor of PoliHub) launched KITT (see here a previous post by BeBeez). KITT aims to support ICT companies through a buy & build strategy. Luciano Hassan founded Kyma in November 2020 together with Gianluca Losi, Michele Fontana Sabatini and Carlo Privitera. Kyma is a growth buy-out investor that targets the majority of solid Italian SMEs and aims to raise 130 million euros. Kyma is in advanced talks with Fondo Italiano d’Investimento (FII) for the role of anchor investor. KITT will be one of the vehicles of Kyma and will have resources for up to 25 million.

At the end of December 2020, F2i acquired MarterNeri, the manager of port terminals of Monfalcone and Livorno, from 91.85% owner Vei Capital, Giorgio Neri (4.07%), Raffaele and Michele Bortolussi (2.65% and 1.43%)  (see here a previous post by BeBeez). After the acquisition of MarterNeri, the turnover of port terminals managers that belong to F2i amounts to 170 million eurosMarterNeri is one of the companies that BeBeez Private Data monitors. Find out here how to subscribe to the Combo Version that includes the reports and the insight views of BeBeez News Premium 12 months for 110 euros per month.

Alex Knaster, the founder of Pamplona Capital, is holding talks for acquiring 75% of Italian football team Pisa Calcio (see here a previous post by BeBeez). Since December 2016, Pisa belongs to the chairman Giuseppe Corrado and his Family, who acquired the team from the Petroni Family. The Corrado Family would keep 25% of the team. The transaction value would amount to 10 million euros. Knaster hired Gianluca Vialli, a former Italian international footballer and cofounder of UK crowdfunding platform Tifosy, Fausto Zanetton, and Marco Re. Knaster has personal resources of 2.2 billion US Dollars. Pamplona Capital currently owns Italy’s Octo Telematics.

Milan listed fashion retailer OVS, of which Tamburi Investments Partners (TIP) has a stake, will act as a white knight for Stefanel (see here a previous post by BeBeez). The Italian Ministry for Economic Development gave the go-ahead to the offer of OVS  that amounts to 3.2 million euros. OVS will buy the brand Stefanel and 23 shops of the companies. TIP has 22.7% of OVS after it acquired from Coin a 17.835% of the target in March 2019 for 74.9 million or 1.85 euro per share. OVS will finance this acquisition with the proceeds of a capital increase of 80 million that will launch by 31 July, Saturday.

SUSI Partners acquired the majority of Genera, an investor in the energy efficiency sector, from Genera Holdings (51% owner) and IKAV Investments (49% owner) (See here a previous post by BeBeez). SUSI Partners carried on the transaction through SUSI Energy Transition Fund, which in July 2020 raised 300 million euros on commitments.

Novamont, an Italian producer of bioplastic of which NB Renaissance, together with other investors in Mater-BI holding, has 75% and Milan-listed Eni has 25%, acquired Norway’s competitor BioBag (see here a previous post by BeBeez). Biobag has sales of 41 million euros. Intesa Sanpaolo and Investitori Associati acquired Novamont in 1996. In 2016, NB acquired the asset. Novamont has sales in the region of 270 million and invests 5% of this amount in research and development.

ClubTre, of which Milan-listed TIP (Tamburi Investments Partners) has 66.226%, sold a 3.729% stake of Milan-listed industrial cables producer Prysmian through an accelerated bookbuilding procedure and fetched 29.250 euros per share or 292.5 million euros (see here a previous post by BeBeez). After this sale ClubTre will have 1.334% of Prysmian for which it signed a 90 days lock up. Prysmian has sales of 11.52 billion with an ebitda of 1 billion.

Enginium, an IT company that belongs to Italian staffing company Gi Group, acquired the IT conslutancy activities of Info Solution (see here a previous post by BeBeez). Gi Group has sales of 2.6 billion euros.

At the end of 2020, Winch Capital 4, part of Andera Partners, acquired a minority of Pusterla 1880, a packaging provider for the luxury fashion sector (See here a previous post by BeBeez). The Meana Family, who acquired the business in 1922, sold part of its interest. GCA Altium assisted Andera Partners. EY and DGPA assisted the vendors.

Minsait, a subsidiary of Spanish Indra, acquired 70% of Italy’s SmartPaper, a provider of digital solutions for filing (see here a previous post by BeBeez). In 2021, SmartPaper expects to generate sales of above 40 million euros.

Hungary’s pet food producer Partner in Pet Food (PPF), an asset that Cinven controls, acquired Italy’s competitor Landini Giuntini from the Landini and Giuntini Families  (see here a previous post by BeBeez). The target’s managers that Steven (ceo) and Gino Giuntini lead, will keep their roles. Landini Giuntini has sales of 73.7 million euros, an ebitda of 7 million and net cash of one million. Cinven acquired PPF in April 2018 from Pamplona Capital Management, which purchased the asset from Advent International for an enterprise value of 315 million. In 2011, Advent acquired PPF as a carve-out from Provimi for 188 million and rebranded it as Partners Pet Food.

Bomi Italia, a logistic company for the healthcare sector of which ArchiMed has a controlling stake, acquired Spanish competitor Deco Pharma Servicios Logisticos and MedTech (see here a previous post by BeBeez). Bomi listed on Milan market in 2015 and in May 2019 ArchiMed delisted the company through a public offer.

Search Fund Club was born, a club deal investing in European search funds launched by the same Italian team who succesfully launched 4 SPACs in Italy and one in the Netherlands