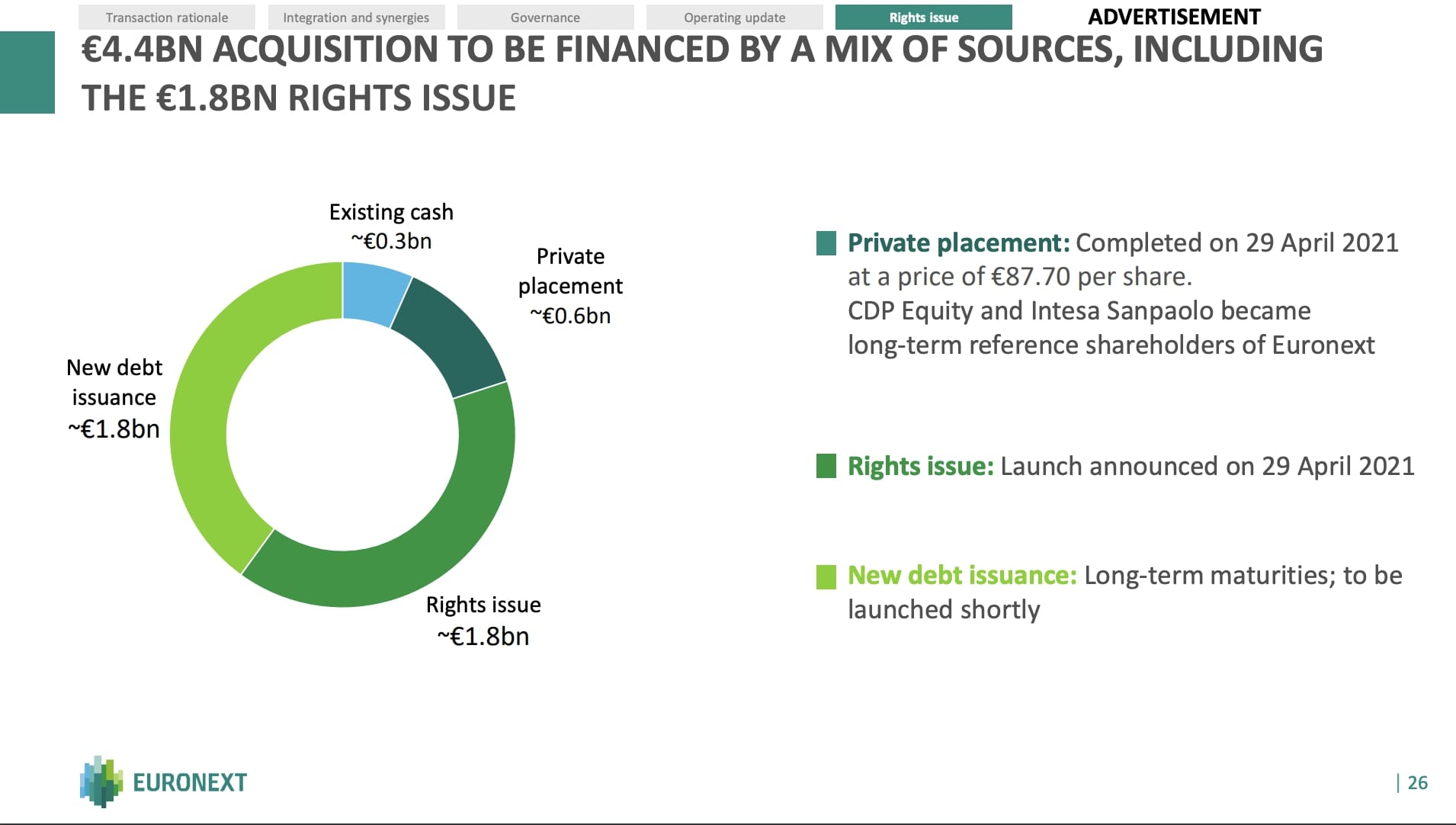 On 29 April, Thursday, Cdp Equity and Milan-listed Intesa SanPaolo acquired 7.3% and 1.3% of Euronext, the company that manages the stock markets of Amsterdam, Bruxelles, Dublino, Lisbona, Oslo, Paris, and Milan (see here a previous post by BeBeez). Cdp Equity invested 491 million and became the main shareholder of Euronext together with Caisse des Depots et Consignations (CDC). Intesa paid 88 millions. The entry of Cdp Equity and Intesa Sanpaolo in the Euronext shareholding capital is functional to the purchase by Euronext of the entire stake held in Borsa Italiana by the London Stock Exchange Group (see here a previous article by BeBeez).

Cdp Equity, Blackstone and Macquarie tabled their final offer of 9.1 billion euros for 88.06% of Autostrade per l’Italia (Aspi) with Milan-listed Atlantia (see here a previous post by BeBeez). The funds may acquire the whole Aspi if the target’s minority shareholders decided to sell. The binding offer may expire on 31 May, Monday. Madrid-listed contractor ACS made an offer for the asset on the ground of an enterprise value of 10 billion

Cdp Equity tabled a bid with Milan-listed utility Enel for acquiring a 10% of Open Fiber, the Italian TMT company (see here a previous post by BeBeez). Cdp and Enel currently own the target with even stakes. The presentation of the offer by Cdp Equity takes place after Enel’s decision last December to consider the offer presented by Macquarie Infrastructure and Real Assets (MIRA) for the purchase of a stake between 40% and 50%, giving the ceo a specific mandate in this regard (see here a previous article by BeBeez). Cdp has also authorized the signing of a binding term sheet with Macquarie, to define the governance structures of Open Fiber following the entry of the fund into OpenFiber’s capital.

Milan-listed energy giant Enel is mulling whether or not to exercise its call option for acquiring from Cinven a 79% of Ufinet International, a LatAm wholesale operator for optic fiber (see here a previous post by BeBeez). In 2018, Enel paid 150 million euros for a 21% of Ufinet and signed a call option for acquiring the remaining 79% between 31 December 2020 and 31 December 2021 for 1.31 – 2.1 billion euros.

Ital Gas Storage (IGS), an Italian operator for natural gas storage of which Morgan Stanley Infrastructure Partners is the controlling shareholder, is again for sale (see here a previous post by BeBeez). Earlier in March Macquarie Infrastrutture Real Assets did not finalize the buy of the asset for which it tabled a bid of little above one billion euros, while Morgan Stanley asked 1.2 billions. IGS attracted the interest of F2i that may integrate the target with its portfolio company 2i Rete Gas.

Octo Telematics, a provider of tracking solutions for insurers and smart mobility companies, hired Barclays to carry on a sale (see here a previous post by BeBeez). Octo Telematics belongs to Russian Renova (48.5%), the chairman Sir John Peace (25%),  the co-founder Fabio Sbianchi and Pamplona Capital (26.5%). Renova had bought control of Octo Telematics in February 2014 from the Charme fund and its co-investors Amadeus Capital Partners and Keensight Capital, with management having re-invested 5%. Renova had subsequently sold a stake to Pamplona fund. In April 2018, Peace and Sbianchi increased their stake buying it from Renova, so as to make Octo Telematics independent of the Russian group and thus not incur the new sanctions imposed by the US against Russia and therefore also against Renova, whose head is the oligarch Viktor Vekselberg. Previous rumours said that the company’s enterprise value is in the region of 1.2 billion euros.

B4 Investimenti acquired the majority of Hitrac Engineering from Fabrizio Mainas and Alessandro Rocchetto (see here a previous post by BeBeez). Bper Banca financed the transaction. B4 targets Italian companies with sales of 10 – 30 million euros operating in niches of market.

Milan-listed IT company Sesa will raise to 70% its current 19% of Italian provider of energy saving services PM Service (see here a previous post by BeBeez). Massimo Innocenti and Andrea Parrini will sell part of their holdings in the business and will keep a minority as well as their executive roles. Sesa paid an EV/Ebitda ratio of 4.75X. In 3Q21 Sesa generated sales of 1.534 billion, an ebitda of 92.2 million and net adjusted cash of 60.4 million.

Andrea Tudini and Federico Ratini, two former consultants of Bain&Company, launched the search fund Argo Partners and raised 560k euros from 20 investors (see here a previous post by BeBeez). Tudini and Ratini said to BeBeez that aim to acquire an Italian company with an enterprise value of 10 – 30 million and an ebitda of 1 – 5 million.

Lifebrain, a provider of medical diagnostic services that belongs to Investindustrial, acquired the competitor Unilabs Italia, the owner of Raffaello and of Unilabs IMT-Medil (see here a previous post by BeBeez). Unilabs Italia has sales of 3.5 million euros, an ebitda of one million and net cash of 0.65 million. Lifebrain turnover is worth 140 million with an ebitda of above 40 million

Customs Support, a provider of services for international logistic that belong to Luxembourg private equity Castik Capital, acquired Italian competitor Sernav  (see here a previous post by BeBeez). The founders Stanzione, Biffignandi and Pisano sold the target and kept an operative role in the business which has sales of 12.3 million euros, an ebitda of 0.678 million and net cash of  0.1 million.

Kashoggi called off the acquisition of nine energy projects based in Italy from Metaenergia, a utility of which the Molinari Family owns 93% (See here a previous post by BeBeez). Meag, a fund of the German Insurance Munich Re, withdrew its support for Kyc (Know Your Client) issues. The Molinari retains Barclays as advisor. The bank is trying to contact the potential buyers that previously expressed their interest in the asset: Sorgenia (a portfolio company of F2i and Asterion Capital Partners), Blackstone, Ardian, Macquarie, Glennmont Partners,Contour Global, Met Group, Engie, and Eph. Previous press reports said that Metaenergia is worth in the region of 350 million euros.

TA Associates paid 21 Invest France, part of 21 Invest of Alessandro Benetton, 100 million euros for acquiring Dl Software (See here a previous post by BeBeez). The target’s managers and founders and 21 Invest will hold a minority of the business. DI Software sold a majority stake to 21 France in 2016 and expects to generate sales of above 100 million.

HG Capital sold to Capza (fka Capzanine) a 60% stake of EidosMedia, a provider of content management systems for publishers and financial services companies (see here a previous post by BeBeez). Christian Pelanconi is the ceo of EidosMedia that HG acquired in 2015 from Aksìa Group and Wise for 10X the ebitda it generated in 2014, making a 2.6X return for the vendors. Capza has resources of 5.1 billion euros.

Induplast, an Italian packaging company that belongs to Europe Capital, is looking for new investors on the ground of an enterprise value in the region of 150 million euros (see here a previous post by BeBeez). The vendors hired Houlihan Lokey as advisor. Induplast has sales of above 40 million euros and an ebitda of 14 million

At the closure of trading on 5 May, Wednesday, Seco, an Italian IT company that is part of the portfolio of Fondo Italiano d’Investimento, recorded a market capitalization of 390 million (See here a previous post by BeBeez). At the opening of trading the company’s share price was of 3.7 euros for a market capitalization of 400 million. Seco has a publicly traded equity of 35.2%.

Scame Parre, an Italian producer of components for electric systems, acquired 85% of Magnum Cap, a Portuguese manufacturer and distributor of e-mobility items, from the ceo and founder José Henriques (see here a previous post by BeBeez). Scame has sales of 106 million euros and an ebitda of 15%.

Hamilton Global Opportunities (HGO), a UK investor in tech companies that Gustavo Perrotta founded, listed on Euronext Growth Paris through a direct listing that carried on with a capital increase of 9.6 million euros (see here a previous post by BeBeez). HGO priced its shares at 42 euros in private placement.   The medium-long term target is raising up to 100 million euros from investors.

Vittoria, an Italian producer of tyres for high-end bicycle that belongs to Wise Equity since August 2020, acquired Dutch competitor A. Dugast from coo Richard Nieuwhuis who kept a minority (see here a previous post by BeBeez). Vittoria paid the transaction with its own resources and has sales of 60 million euros.

Bancomat, the network of ATM facilities, will launch a capital increase for eventually financing acquisitions (see here a previous post by BeBeez). The company’s shareholders are expected to subscribe the capital increase. Bancomat belongs to Intesa Sanpaolo (24.2%), Unicredit (18.9%), Banco Bpm (7.67%), Mps (7.57%), Bnl-Bnp (5.05%), Bper (4.6%), Cassa Centrale (2.8%) and other Italian banks with minorities. The asset is said however to attract the interest of private equity funds and of paytech firms.

Milan- listed Trevi Finanziaria Industriale (Trevifin), a former troubled engineering and drilling group that belongs to FSI Investimenti and Polaris Capital Management, generated a turnover of 491.3 million euros (623.2 in 2019) and an ebitda of 50.2 million (59.4 million) (see here a previous post by BeBeez). Trevi’s debt amounts to  a 269.4 million (736.4 million), while profits are worth 241.5 million (75.8 million losses). Such results are a consequence of the 259 million proceeds out of the sale of the Oil & Gas division to India’s Megha .

Spac, here is why in the USA it is now in sboom. In Italy, meanwhile, the market is awakening again. New Spac of Arietti and Cavallini coming soon